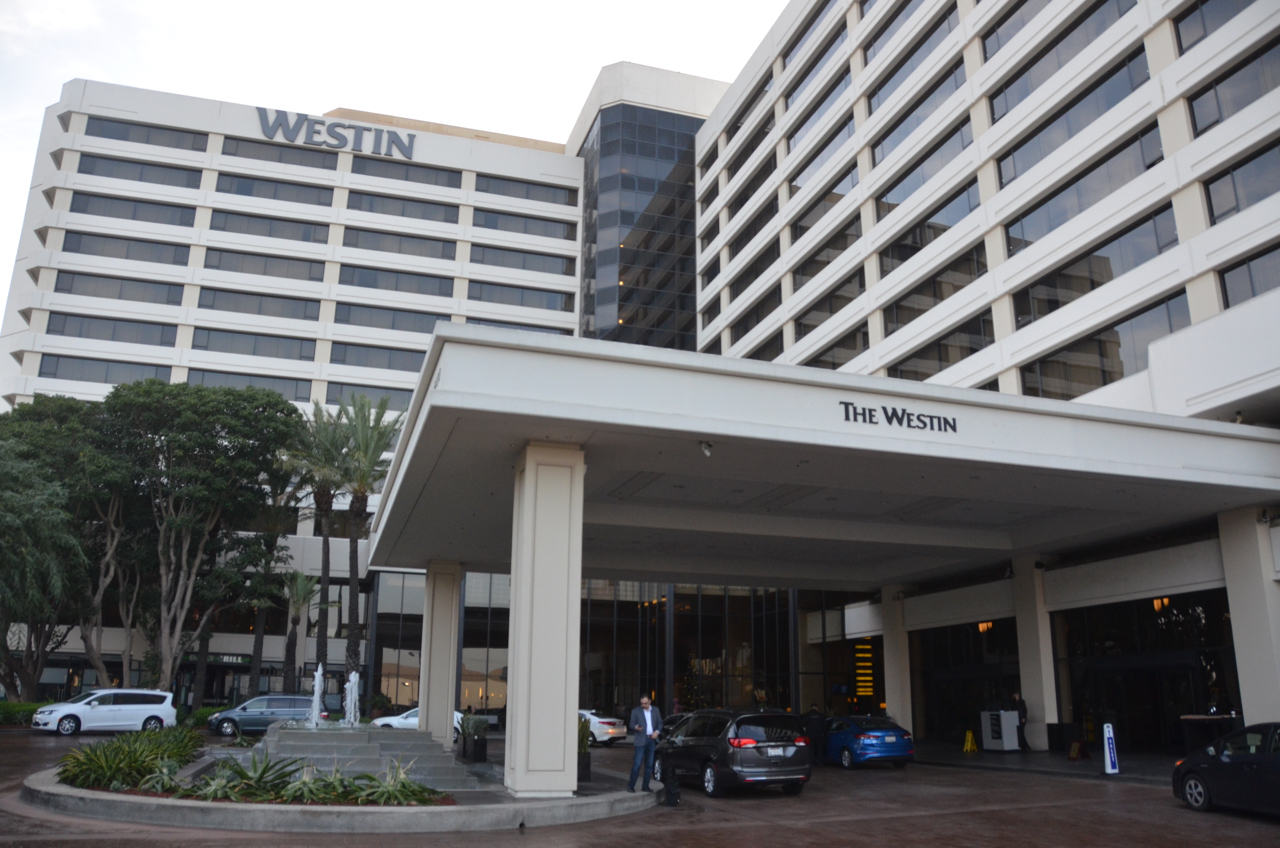 I was able to get a bargain basement rate of $100 USD here; which fit the bill for my solo and quick 20 hour transit of Los Angeles. I had last stayed here in September 2015. I had considered trying a different property but didn’t see the need to spend time in transit to and from the airport area. Ultimately deciding on the Westin LAX again, I had Suite Night upgrades to burn and applied one within the 5 day window. It cleared into a corner suite in less than one hour.

I picked up a one day rental from Hertz. I was going to go without a car, but the rate was only $20 USD for a 24 hour period so I figured why not? It beats being completely stuck at the hotel, eating hotel food, and relying on airport shuttles. This Hertz location is reportedly the busiest in the world by volume of rentals per their Gold Rewards Newsletter and they were remarkably efficient.

I self parked in the back and found the lobby. I had a quick and friendly check in and the agent indicated that in addition to the SPG Platinum amenity of breakfast being offered in the restaurant downstairs, they would also be posting 1,000 welcome points to the account. The friendly agent thanked me for the loyalty and wished me a pleasant stay.

The property here is absolutely massive. It’s probably the largest Westin I’ve ever stayed in, with 12 floors, 736 rooms and only 34 suites. The first impressions are of an old school / old world lobby with high ceilings. The lobby is large enough on it’s own to old two Christmas trees.

The Room: A Corner Suite

I led myself to room #1036 which was a corner suite. It was about 150 paces from the elevator, which required key fob access to get to the tenth floor.

The initial impressions of the room weren’t so great. The property is really showing it’s age. While the furniture is in great condition, there was a musty smell coming from the foyer. The light switches and fitting were really old. At least there was a large living room…

The hotel also had a completely separate bedroom.

There was the in room coffee maker. I usually bypass the coffee, but I was craving a regular coffee after all the cappuccinos and espressos in Europe.

There was a corner balcony with two chairs and a table. It had a somewhat scary view. The view was south east of the aircraft approach of the south runways. Otherwise, not too inspiring.

The bathroom was standard 1980’s hotel fare. Compact but it had all the essentials.

The neighborhood surrounding the hotel has all the appeal of a tax audit. There isn’t too much around the hotel aside from gas stations, a Denny’s restaurant and a few highway on and off ramps.

I did a face to face check out the next morning. The friendly agent thanked me for the stay and wished me happy holidays.

Aside from the somewhat tired hardware, the property was a reasonable stay for a quick stay in LAX. Although not the most state of the art or interesting stay, it fit the trick for a $100 stay. It was perfectly fine for a solo trip through Los Angeles. Although admittedly, having stayed twice, I’ll probably be considering other options going through LAX for a more interesting stay in a nicer neighbourhood.