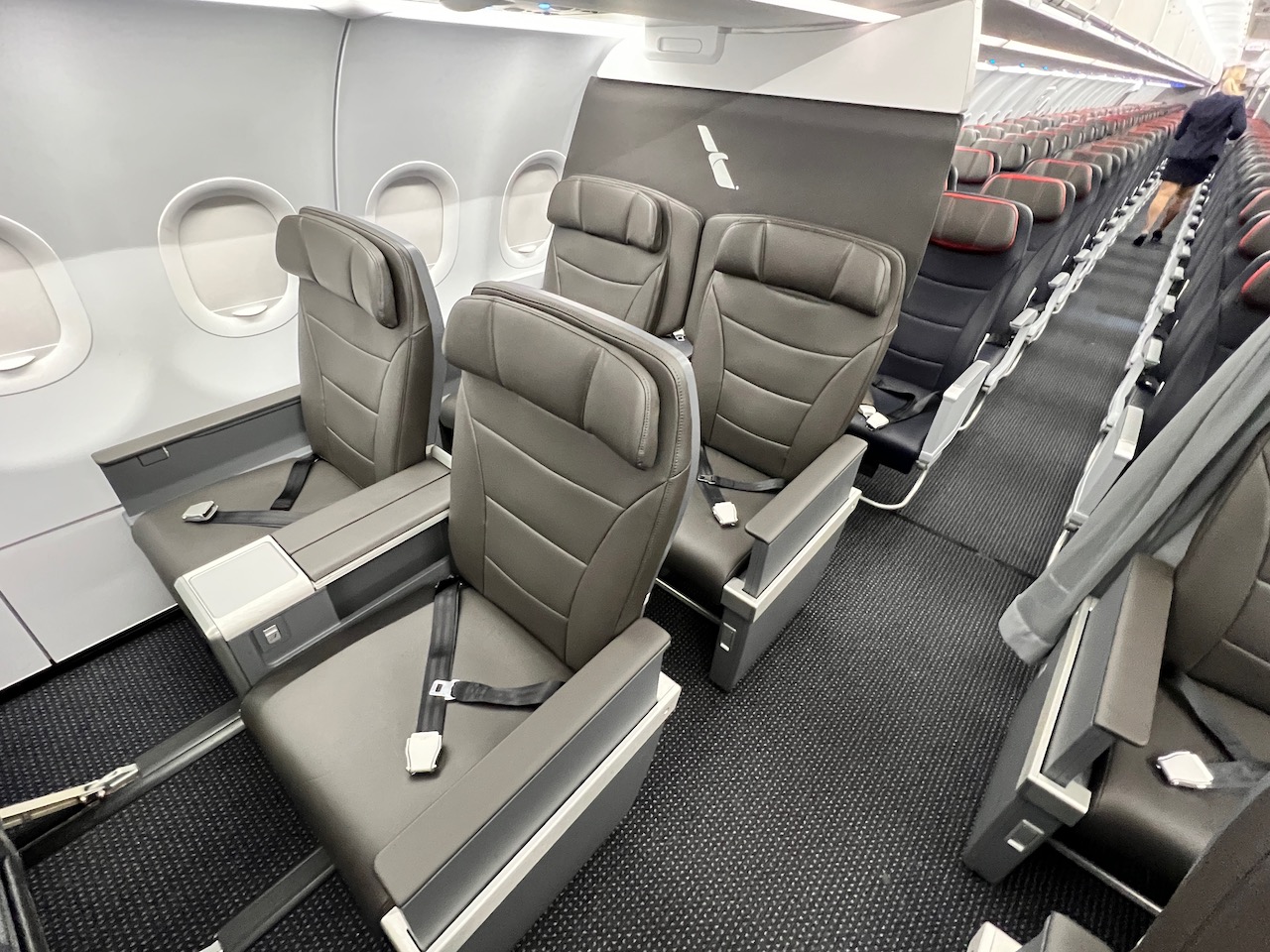 American Airlines offers a high number of flights between its two hubs in Los Angles and Miami. Our flight today would have us experiencing their Airbus 321neo aircraft, which was among their newest aircraft configurations. American Airlines offers a Flagship Business Class and a Regular “First Class” offering. This experience would have us on their Regular “First Class” offering. How would it measure up on a trans-continental service standard?

This post is one chapter on our trip during the pandemic to Curaçao in the Southern Caribbean. This trip was enhanced through Marriott Bonvoy Elite Status and Hertz Gold Plus Rewards. For more information on how this trip was booked, please see our trip introduction here. For other parts of the trip, please see this index.

We were originally ticketed to travel from Miami to Los Angeles on an American Airlines Boeing 777-300 aircraft with a wonderful international business class executive pod that happened to be flying a domestic route. Unfortunately, due to a schedule change as a result of light pandemic travel demand, our evening connecting flight from Los Angles to Vancouver was eliminated. As a result, we were downgraded into First Class onto American Airlines newest aircraft on the Airbus 321neo.

You’ll have to locate their seasonal route between Los Angeles and Miami to book this route, along side their select other routes that Flagship First Class is offered. This flight, however, was on their regular American Airlines First Class Airbus 321neo; without almost all of these features.

We departed the JW Marriott Miami and drove ourselves to the Miami International Airport car rental center. We returned our Hertz Rental and with no attendant working at 4 AM, we left the car in the secure area with dozens of others. We left and proceeded to walk to our Concourse to check into our flight.

There was no TSA Pre Check available until 5 AM. As a result, we just use the regular queue with “TSA Expedited Screening”, which allowed us to keep belts, shoes, glasses and hats on” but laptops and liquids out in the trays.

The airport was pretty when we arrived to the secure side at 4:35 AM. American Airlines cheats a little at this hour. With lots of flights on the departures board and scheduled to leave, we headed to the American Airlines Admirals Club Miami but found it fully closed for the next 55 minutes until its opening at 5:30 AM.

This was past our boarding time, and with long lines at the concourse retail outlets for morning coffee, we headed to the Turkish Airlines Lounge Miami in nearby Concourse “E” for a cup of coffee. Access was granted through a Priority Pass membership with the American Express Platinum Card and was not directly included with our ticket.

On Board American Airlines First Class:

The American Airlines First Class seating on the Airbus 321neo offers a slim line recliner seat. The seat is reasonably comfortable. It wasn’t a wonderful business class pod on a wide body aircraft, but it was certainly an “okay” way to fly trans continentally.

I might not be so thrilled about it if I were connecting off a Trans – Pacific or a Trans – Atlantic flight and had another 6 hours in this type of upright seat in order to get to a final destination while impacted by a time zone change.

Looking back into Economy Class, seating on the Airbus 321neo is in the usual 3 – 3 configuration with flashy red head rests.

The seats offered a generous storage space large enough for a 13 inch Macbook Pro laptop in the console under the armrest. The space also offered Empower charging, which was enough to charge or keep you working throughout the entire flight.

We had some last minute upgraders get officially upgraded to Row 3A / 3C taking the seats next to us. We ended up with a full load of 20 / 20 in First Class today with over 17 people on the upgrade list.

In other pandemic service disruptions, there was no pre-departure beverage offered today. I was really happy I had my earlier cup of coffee at the Turkish Airlines Lounge Miami as I wouldn’t get served any coffee until about 95 minutes into the flight.

Unlike many other trans continental first or business class services, there wasn’t anything waiting at the seat for us today. My usual trans continental flights on Air Canada typically offer a water, pillow or blanket for a flight over five hours in length. At times you even get an amenity kit. However, there wasn’t any of that today, with just a bare seat waiting for us.

The captain came on to announce a flight time of 5 hours and 52 minutes for the trans continental flight across the United States. He also indicated that he would be keeping the announcements to a minimum given the early morning hour of the flight.

We eventually got underway on Runway 8 departing Miami International Airport. This led us with a departure over Miami Beach with a left turn track northwards over Fort Lauderdale eventually heading westward over the Florida panhandle and the Gulf of Mexico.

We had an enjoyable sunrise as the day grew to daylight. Unfortunately, the character in the seat in front of me was having none of the early morning relaxation that everyone else was having. He turned into the frantic seat adjuster slammer type that vibrated his seat back chair every 15 minutes or so. It was bad enough to sit behind this guy, but I couldn’t imagine sitting next to him in 2D. Yeesh!

The Meal: A Breakfast

After we had arrived to cruising altitude, the flight attendant came through the cabin to take meal orders. Today’s meal choices were an egg enchilada or a fruit salad. Thankfully, even though we were in row 3, we still had our first choice of meals. On my other American Airlines flights, we were unlucky enough not to get our first meal choices by row 3. American Airlines does offer a pre-order service but it had been suspended as a result of the pandemic. At the time of our flight, it had not yet been re-instated.

The first cup of coffee wasn’t offered until 7:35 AM. It was served in a pretty thin but contemporary looking cup. They never came around to offer any refills until the meal service.

At about 8:30 AM, or two and a half hours into the flight, we were offered the American Airlines towel service. This consisted of a small warmed towel offering. By this time, half the cabin was asleep or resting. I guess that is one way of cutting down on the amount of towels you have to dispense and collect (laughing).

At about 9 AM, or three hours into the flight, the breakfast was served. I used the tray table that was hidden in the right arm rest on a window seat.

The tray table extends to a part or full table based on a folding mechanism in the table itself. This is pretty convenient for drinking and working.

When it came time for the meal, I enjoyed the egg enchilada that looked a little off on the presentation. I can appreciate that there aren’t many ways to dress up an enchilada but this one didn’t look super appealing. The egg enchilada was served with black beans and yellow corn. It has a little mild spice on the palette. The first coffee top ups were offered with the meal service, or about ninety minutes after the initial offering.

The “in flight entertainment” was offered through the American Airlines wifi. There was a substantial amount of movies available on the flight. As there were no seat back monitors, you had to bring your own device with you.

While there were no i-Pad’s passed out like Alaska Airlines, I was able to access the entertainment through the American Airlines in flight wifi and app similar to on our previous flights.

The Second Service: A Snack Basket

At 11 AM, or about four hours into the flight, we were offered selections from a snack basket. There were some craft items in the snack basket, which was a nice touch to get some upscale items. I enjoyed a Lillie’s Original Kettle Chips from a generous 14 gram bag, and a Sheila G’s Brownie Brittle Chocolate Chip from a 28 gram bag. In a bit of a low rent touch, there was no drink offer that went with this salrty and savoury snack.

While it’s not normal to expect a full second service on a six hour flight, adding a proper drink service would probably add a little formality to it.

The captain came on with 65 miles left remaining to LAX Los Angeles International Airport. We had terrific views arriving over the Santa Rosa and San Jacinto Mountains east of Los Angeles.

It wasn’t long before downtown Los Angeles was in our sights as we descended into Los Angeles International Airport. We spotted California’s amazing Interstate Freeway system throughout our descent.

We arrived into Los Angeles International Airport in Concourse 50.

My Thoughts on American Airlines First Class on the Airbus 321neo from the Caribbean:

I was a bit non plussed by the American Airlines First Class Airbus 321neo experience on this trans-continental flight. The American Airlines First Class cabin is a well designed cabin with a functional seat. However, the service delivery of the in flight service seemed to be a little hap hazard with meals interspersed throughout what would normally be a time when passengers would be asleep, with no drink offer with the second service snack basket. While it was a comfortable way to travel across the United States, it was no American Airlines Flagship Business Class.

If you travel trans-continental on American Airlines, do you attempt to fly on their Flagship Business Class Routes ?