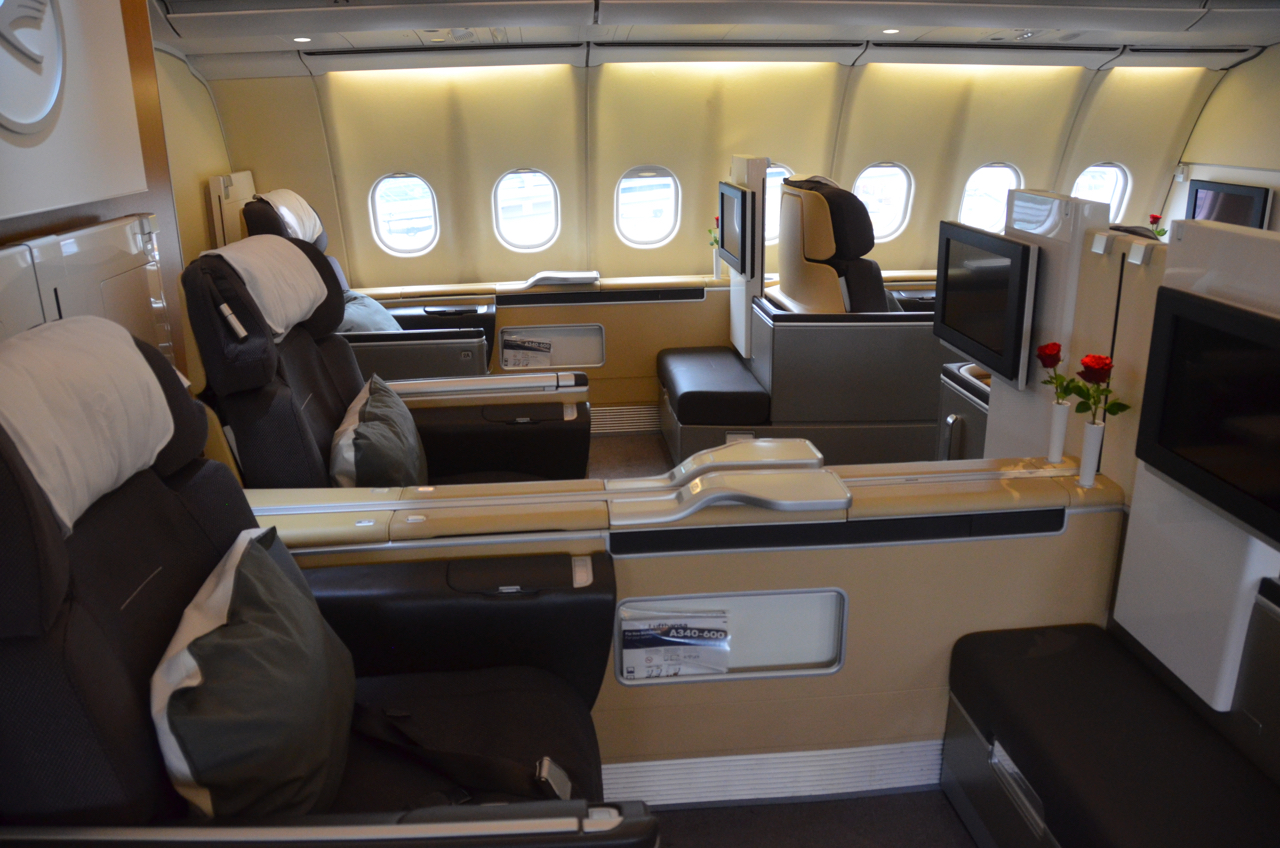 I was able to lock into this flight at T-10 days. The demand for First Class right before Christmas must be weak as there were lots of empty seats. I kept my eye on Expert Flyer and set seat alerts. Sure enough, availability opened up in the form of one seat. I called in to grab it. Further availability opened up the closer and closer we got into the date and I could have booked another seat had I wanted to. The flight showed as F4 but in the end only 3 of us turned up for the flight.

At about T-50, I headed down to gate H 14. They must do extra document checks at these gates as all the US bound flights were departing from here. A document check with passport inspection was in order.

I headed over to H14 where a line was forming for boarding. Boarding was called all at one for First, Business Class and star gold. This meant about 10 of us rushing up to the gate at once.

We had double jet bridge boarding today onto the older Airbus 340-600. On board, I was the first person to settle in into first class. I led myself to seat 2K.

“The Lufthansa First Class cabin is among the most refined, understated and discreet flying experiences today. The cabin is accented in soft hues and is punctuated with a red rose at every seat.”

As always, Lufthansa First Class is a super elegant cabin among the best in sky. Understated and spacious. Not like Emirates which is too blingy and BA which is way to tight and cramped.

A Pre-departure beverage was offered, along with macadamia nuts, and pyjamas, and amenity kits.

The seat offered reasonable storage and the wired remote to control the entertainment system. I checked out the seat and it’s features.

In real first world problems, a flight delay was announced by the pilots due to air traffic control. We were delayed 50 minutes. There was another pour of Laurent Perrier Grand sciele from the ice bucket while we waited. Bliss indeed.

I used this time wisely to check out the amenity kit. It was reasonable and stocked with La Prairie goodies which MrsWT73 promptly took over as soon as I arrived back home.

Eventually got underway, along with all the other US flights from our group. We departed behind United, another Lufthansa A380 going to somewhere and the Air Canada flight to Toronto. The Munich landscape was green and lush as we left.

The Purser came around for a welcome and a small talk. The menus were dropped off.

Along with a reasonable wine list with some eccentric choices.

“Dining in Lufthansa First Class is always an adventure to discover”

After we got to altitude, I opted for the full 5 courser to start. It was served with a US CBP customs form.

I started with the Smoked salmon, sauerkraut, pesto mouse

Followed by always engaging, Caviar with the traditional garnishes, with grey goose vodka over ice.

Followed by the trio of appetizers,

Followed by a soup course; Topinambour Cream, baby bread dumpling. This was pretty flat tasting. Surprisingly, the bowl was not very deep. The bread dumpling was actually wretched; I ended up leaving it behind.

The main was the Lamb loin, teriyaki tomato juice, and japeleno polenta. It was very tough with some gristle. It wasn’t super impressive…

I paired all this with the white new zealand wine, followed by the red Kanonkop Pinotage with the lamb.

The meal ended with the always excellent cheese cart.

After dinner, we were headed over Greenland. I made up the bed next door in 2G. Dinner service was completed in about 3.5 hours, which was a nice leisurely affair

I attempted some sleep. Took some relax and sleeps but being a daytime flight along with the engine noise I didn’t really get anywhere. I rested for about 5 hours until I figured it was time to eat again. I relocated back to 2K with some coffee.

In order to pass the time, I attempted the online wifi. Lufthansa provides a free pass for the whole duration of the flight for Wifi members. It worked okay but was very slow.

About 90 minutes prior to landing, I had the second meal service. The second meal service from the snack menu and consisted of smaller plates being brought out instead of a single offering. With it being a lunch, it sort of threw me off. I think I would have rather had a breakfast item.

We had made up some time on landing but not the whole hour. We landed about 30 minutes behind schedule with the usual views on approach into Los Angeles.

“This Lufthansa First Class flight was another consistently excellent experience with comfortable surroundings and professional discreet service in one of the most comfortable cabins in the sky.”

Overall a super terrific flight by Lufthansa in probably my favorite first class cabin in the world. The service was excellent, the seat comfortable. The only oddity is the food which appears to be getting stranger and stranger. The lack of a proper second meal is a strange statement for a 12 hour flight. I would have rather had a full second serving as I actually got off the flight hungry; something that never usually happens in International First Class.