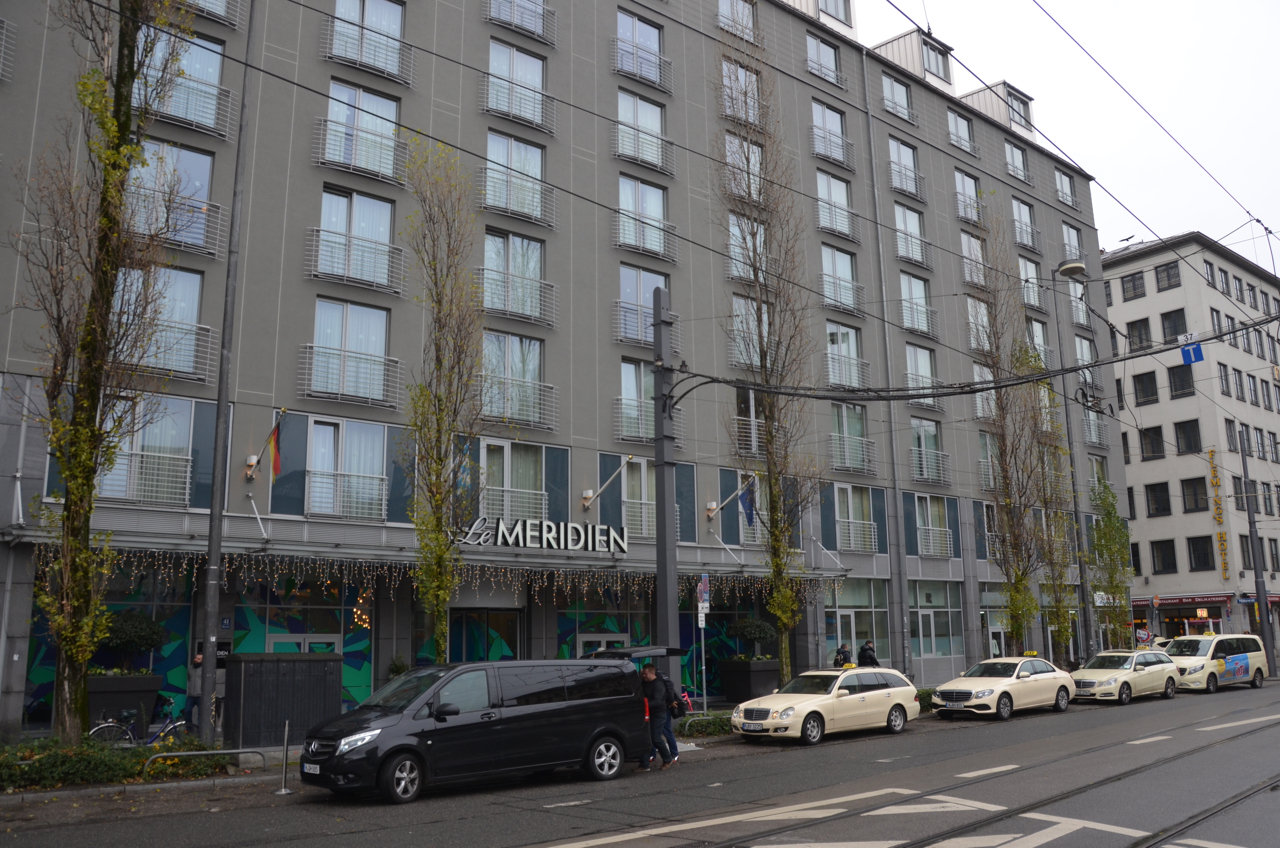 We picked the Le Meridien Munich as it was centrally located next to the Munich Hautbahnhof train station that we would use for our travels up to Hanover, Germany after a few days.

We booked direct on the Marriott Website. As a result of booking direct, we were entitled to Marriott Bonvoy Elite Benefits which included best available room at check in, a complimentary breakfast and a guaranteed 4 pm check out.

Our reservation for this stay was on a back to back reservation with two booking numbers. One half of our reservation was on a free night award courtesy of the Canadian Starwood Preferred Guest American Express card and the other night was on a cash basis.

We applied suite night awards to our stay which had cleared into a Suite separately on both reservations. The front desk host was able to merge our reservation(s) and keep us in the same room so we wouldn’t have to transfer mid stay.

Getting to the Le Meridien Munich:

We walked out the south door. The Le Meriden Munich is right across the street from the Hautbahnoff and next door to the Aloft. The Meridien’s location, although not in the nicest neighbourhood of Munich, is exceptionally convenient to access Munich’s transit systems. It’s also within reasonable walking distance of Marienplatz. Some photos from throughout the stay.

While the train station neighbourhood isn’t too exciting and personable, it is mighty convenient for stays in Munich

The Le Meridien Munich is located immediately across from the train station. It was a wheel across the street and we were at the front doors.

We found our way into the lobby at about 9 PM where there was no line to check in. The lobby is a reasonable space and there were often people hanging out there.

Our check in was completed promptly and we were assigned our corner suite.

We self led ourselves to Room 525, which was a corner suite. The room was a great and comfortable size, and just the thing we needed after a long day of traveling.

There was a separate seating area, along with a sofa bed that was actually comfortable to sit on.

The bedroom faced the street side. It had a nice comfortable bed which was great for relaxing.

Unfortunately, the street side is quite noisy with both ambulances, street cars and a taxi stand within proximity of the North Side of the hotel. This made getting a restful sleep a little challenging at times.

The bathroom had a separate dressing area, which was convenient for getting ready.

The bathroom was the standard variety; nothing all too special.

This hotel participates in Make a Green Choice.

During our stay, we enjoyed two great SPG Platinum Breakfast(s). The breakfast was offered 6:30 AM to 10 AM on weekdays and 7:00 AM to 1 PM on weekends. We were able to roll in at 11:00 AM on Sunday morning which was really appreciated after a late and jet lagged arrival the night before. The breakfast space is the contemporary breakfast room where a cheery attendant led us to available seats.

“If you enjoy a quality hotel breakfast, the Weekend Brunch at the Le Meridien Munich is not to be missed”

The breakfast offered an egg station, espresso coffee machines and free pour prosecco sparkling wine on the weekends only.

The hotel also offers a small bar / lounge. The lounge was typically full and appeared to be difficult to get a seat in, often resulting in customer spill over into the lobby. This was a pay lounge and not a dedicated lounge for Club Level or Platinum members.

All in all, I was really satisfied with the Le Meridien Munich. The hotel offered a comfortable stay and met everything for our needs in the area. The breakfast was substantial and the condition of the room was in solid shape. I also enjoyed Le Meridien Munich more than our past stays in Munich in the Arrabella Park areas where the hotels are a little older. The only minus was the room assignment which faced the street As a result, it was a little noisier than we would have liked. I would have asked for a room assignment facing the back or courtyard of the hotel if it was offered.