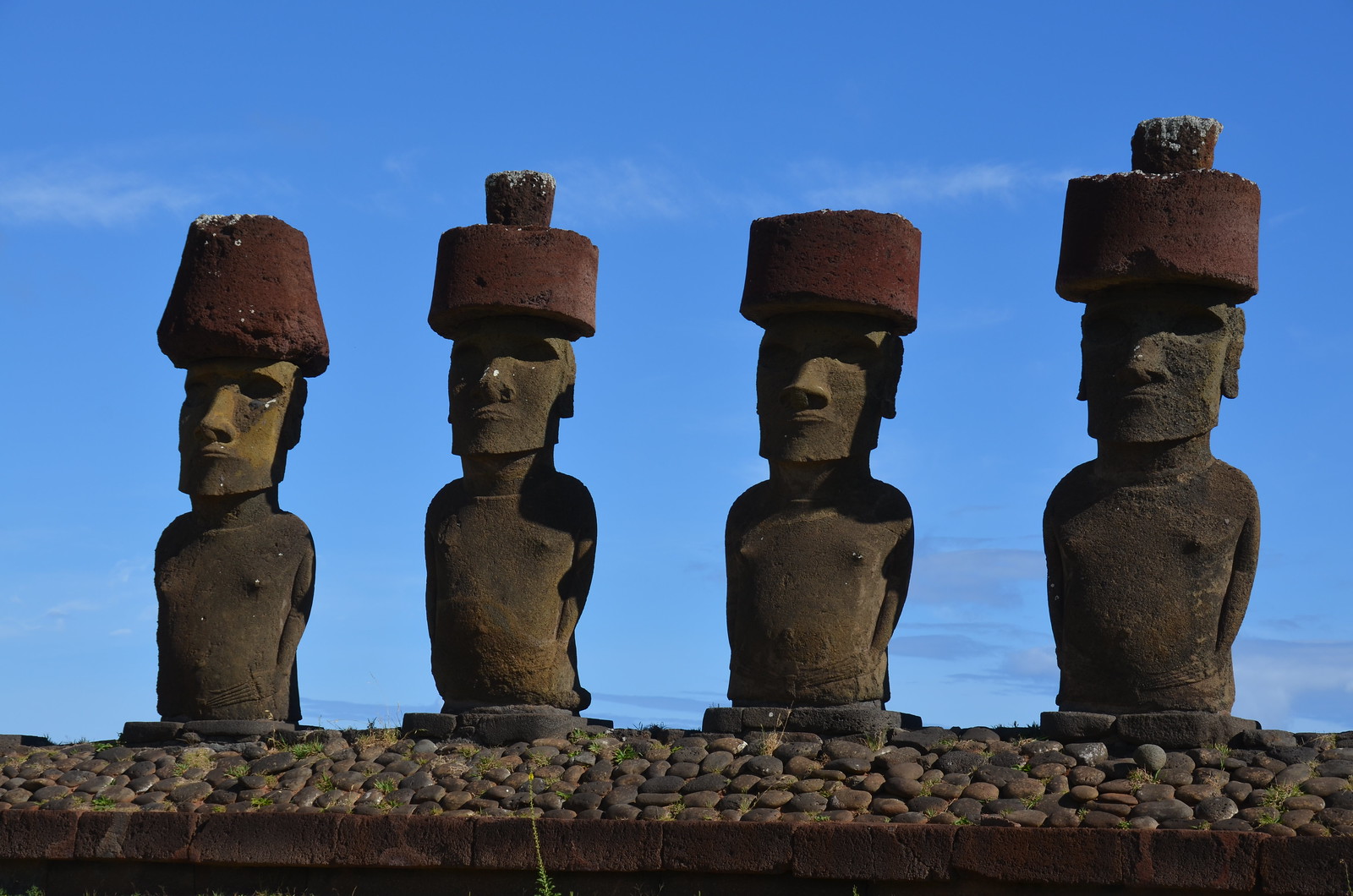 Our last day of touring on Easter Island took us through the lessor known sights of the island. Today’s visits included the beach at Anakena, Puna Pau, a pass by the crater at Orongo, the lights at Ahu Akviki and a last return to Ahu Tahni. Despite not having the most internationally famous sights, there was still a lot worth seeing on the island in some of the lessor known attractions.

This post is one chapter on our trip to Mexico City, Mexico and Easter Island, Chile. This trip was enhanced through Alaska Mileage Plan and through Marriott Bonvoy Elite Status. For more information on how this trip was booked, please see our trip introduction here. For other parts of the trip, please see this index.

Our last full day on the island had us doing the other tour with Easter Island Travel; “A Journey of Legends”. We were picked up at the Hotel Taura’a by Meheddin. The tour is set up to see the opposite side of the island, so that you can get in all the major sights in two days.

We headed out first to Anakena Beach. It was about 35 minutes drive from Hanga Roa. We managed to previously visit Anakena on our second day on the island.

The weather was co-operating a bit better today with full sun out and about. It was really nice in the morning sun as you could actually see the moai faces with strong detail.

We had the explanation of this being the first spot where the islanders came ashore. We were able to get a close look at the moai. The sand had not shifted and you could actually see impressions in the sand compared to ur last visit.

Uphill from the ahu and 4 moai with top knots, we saw ruins of a boat house foundation in the grounds above the site. This was allegedly the settlement and house where explorers first set foot on Rapa Nui.

We got some free time on the beach. The beach was in good condition and really sunny on our second visit. I took a look around but didn’t find my Maui Jim sunglasses that I had lost on the visit two days ago.

I couldn’t get enough of this place. Its an island paradise that hopefully I can get back too one day. . .

We left Anakena and headed over to the top knot quarry of Puna Pau. The quarry had since been filled in but it had good views from the top of Hanga Roa and the area around.

The islanders made the top knots here and rolled them to the sites for final installation. Reportedly, the top knots were made for individual moai and not all top knots could be installed on all moai since they had interlocking features. The quarry was 12 km to the shore line and 12 km the other quarry at where the moai were chilsened. The place looked like a Microsoft Windows screen saver in the sunshine, with rolling clouds and gentle sloping hills.

This was all that was left of the quarry pit; a filled in bowl.

There were some great views down to Hanga Roa on the soft volcanic rolling hills.

The Island’s only land moai

We left the top knot quarry and headed over to nearby Ahu Akivi. They were known for being the the only moai that are placed at an in land location. All the others are looking inward at shore locations. The moai at Ahu Akivi stare at the sunset and are aligned with the spring solstice. There were only six of them without top knots.

There were caves and tunnels in the area, that we did not get to see. The moai themselves here have been re-constructed with concrete as they were previously in poor condition.

We returned one last time to our favorite sunset moai Ahu Tahai near Hanga Roa. It was nice to see them in the day time. We approached it from the vehicle entrance which was away from town; we had usually approached on foot from Hanga Roa itself.

We also learned that the solitary moai with eyes was re-constructed. It was one of the only moai with coral eyes on the island. The island was not to further reconstruct the moai as the whole island is now a UNESCO heritage site; which means no further re-construction or changing of the statues presumably without heavy bureaucracy. It worth noting that out of about 900 moai on the island, there are only about 50 that are upright standing proud. The rest are tipped over or otherwise in archeological sites.

Our guide happened to notice the sole LAN flight arriving at IPC for the day. She picked it off when it was way out. I was busy looking at the moai so I didn’t notice until late.

Similar to other sites, there were boat house foundations in the area, in addition to a reconstructed canoe dock area below the moai. The circles in the moai were for public announcements only of significance by the islanders: such as “I’m pregnant”. I couldn’t imagine announcing that publicly!!

We had lunch at a wine bar here. Turns out it was hidden on the pack side and we never noticed in the two times we were here at sunset. I was able to get an Mahina Easter Island beer; one of the only ones I’ve had with a moai head on it.

After lunch, the group headed over to the scenic Orongo crater. As with the quarry earlier in our trip, you can only visit this location once on the national park ticket. Despite this, Orongo crater was totally deserted on our visit.

Once we arrived past the visitors center, we started off on the walk as led by our guide along the volcano rim. We were on top of a dormant volcano so it was quite windy and exposed.

We were led to the re-constructed village which happens to sit on top of the volcano rim. After the Rapa Nui persons knocked down all the moai word has it that they settled up here in tiny boat covered houses. The birdman games led competitors to run down to Moto Nui to chase after the first egg of Mantura bird. The winner who was able to return the first unbroken egg to to the top got to rule the island for a year. Moto Nui is the small island down at the bottom. There was supposed to be great clear snorkling down there but apparently not much fish.

There were some reconstructed models of the village. This included a replica of a living quarters.

We followed the path over to the Orongo crater. It was previously filled with edible fruits and vegetables that had been planet in the event that the fishing was not going to continue. There were still some fruit trees in the crater (non accessible). It was a pretty stunning view from the top. The last volcano crater I was lucky enough to be in was the Halehakala National Park on Maui, Hawaii, USA and the vegetation did not look as rich as this particular location.

We had one last view looking northwards towad Ahu Tonkariki up island from one of the tallest places on the island.

The Caves of Ana Kai Tangata:

We headed down the mountain and had our last stop of the day at Ana Kai Tangata. After we had a short walk across a field from the road, we clambered down a beautiful trail which led down to an underwater cave.

The underwater cave was used as a stop over or eating point on boat travels around the island. There were painted symbols inside the cave. Of course, as with many things around the island, there were hazards due to erosion from around the cave entrance (falling rock).

We were dropped off by our guide at the Hotel Taura’a. Easter Island Tours had provided another full but excellent day. I can’t highly recommend them enough.

We had our last dinner of our 5 day, 4 night trip down at Pea in Hanga Roa where we started with the snacks on day one. The menu was mostly the easily obtainable fish; tuna, ceviches and other seafood items. Pea offered another open air dining experience with awe inspiring ocean views.

I had a small mountain of tuna ceveche with red onions, rice and potato crisps along with a pisco sour as we watched the sunset one last time.

Getting the Easter Island Passport Stamp:

On our last morning, we slept in a bit and did the final packing for our trip home. I was really sad to leave this place. Perhaps it was the knowledge that because it was so far away, chances are we wouldn’t be back for quite some time.

We headed for the passport office to get the Isla de Pasqua stamp for our passports. The stamp was just sitting on the counter and we were free to help ourselves. It made for an interesting photograph along with our park permits that had been stamped multiple times for all our site entries.

We then headed uptown to an area that we had not yet explored on foot. There were lots of stray dogs around town.

Eventually we made it to the church. The church bells clanged throughout our stay and we would easily hear it from our hotel room.

The church was totally empty but we could hear it’s bells clanging every hour all over Hanga Roa town, even down at our hotel some 5 kilometers away.

We also hit up the larger souvenir market. Having already picked up our fair share of moai heads at the quarry, we didn’t come out of here totally broke. It was nothing special, although I did get some small stone heads with top knots to take home.

My Impressions of the other half of Easter Island:

We closed off another terrific day on this neat little island. I could have easily gotten used to spending a longer period of time visiting one of the world’s special places. With so much to see and explore, it is very easy to get lost in the Island’s natural attractions.

If you have visited the Oronogo Crater, did you find it an inspiring place to be ?

Like Loading...
← Towering Under the Giants of the Rano Raraku Quarry and Tonjariki of Easter Island, Chile.
Review: LATAM Business Class B787-9, Easter Island – Santiago →