Read more from this trip

The hotel for this stay was selected by MrsWT73’s company as they had representatives from North America and Germany staying here. It forms part of Marriott’s Autograph Collection, which I read to be Marriott’s attempt an independent and unique line of hotels that don’t bit the usual Marriott branding. It was in reasonably close proximity to the Georgia Center Convention Center in a walkable distance.

I arrived to the hotel after the flights and a short 17 minute taxi for a flat $30. MrsWT73 had arrived the day before, so the room photos are previously enjoyed.

Per their website, The Glenn Hotel building at 110 Marietta Street, Atlanta Georgia, was built in 1923, and was named after John Thomas Glenn, a prominent attorney and the 31st mayor of Atlanta from 1889-1891.

The Glenn building was constructed on an historic site. According to the contemporary record of General Tecumseh Shermanís march on Atlanta, the house on that site, which was owned and occupied by Major Hamilton Goode of the Confederate army, was spared. It is significant to note that the intersection of Marietta and Spring Street was part of the original center of old Atlanta.

Starting in 1975 the Atlanta Urban Design Commission, by the authority of the City of Atlanta, undertook a field survey of Atlantaís historic resources by a team of researchers who identified sites within the city that may have historic and/or architectural significance. In its 1981 Atlanta Historic Resources Workbook, a photo and article appear as part of the official roster of historic sites, structures and districts for the city. Again in 1987, the Commission updated the cityís inventory of historic sites and districts, which included the Glenn Building.

A wave of new office development swept into downtown Atlanta on the heels of two events: the opening of the Spring Street viaduct, and the grading and paving of Spring Street out to Peachtree. The ten-story Glenn Building, commissioned by the George Fuller Company, was part of its growth, its construction coinciding with the opening of the new viaduct.

It is a rather severe building, with a smooth, limestone facing. Terra cotta detailing along the base and top stories of the structure, as well as a heavy cornice, create the only relief.

The building was designed by the Washington, D. C. architect, Waddy B. Wood. According to plans drawn up by Burge and Stevens, the Glenn Building was to have been part of a larger business complex, including additional office space and a garage with uniformed chauffeurs. The garage, which extends several stories under the Spring Street viaduct, was completed in 1928. The office addition, however, was never built.

Richard Guy Wilson of the University of Virginia, calls the period of the 1920s and 1930s one of the great periods in American architecture and design. This period has been given different stylistic names, such as Art Deco, Modern classic, Stripped classic, Streamlined, PWA, and WPA. According to Robert M. Craig of Georgia Tech, the Glenn Building fits neatly and persuasively into this period as Modern Classic.

In 2006, Legacy Property Group undertook a major redevelopment of the Glenn building creating the first boutique hotel in Downtown Atlanta. The building was subsequently placed on the National Register of Historic Places and continues to proudly watch over the progress of Atlanta from the corner of Spring and Marietta streets. 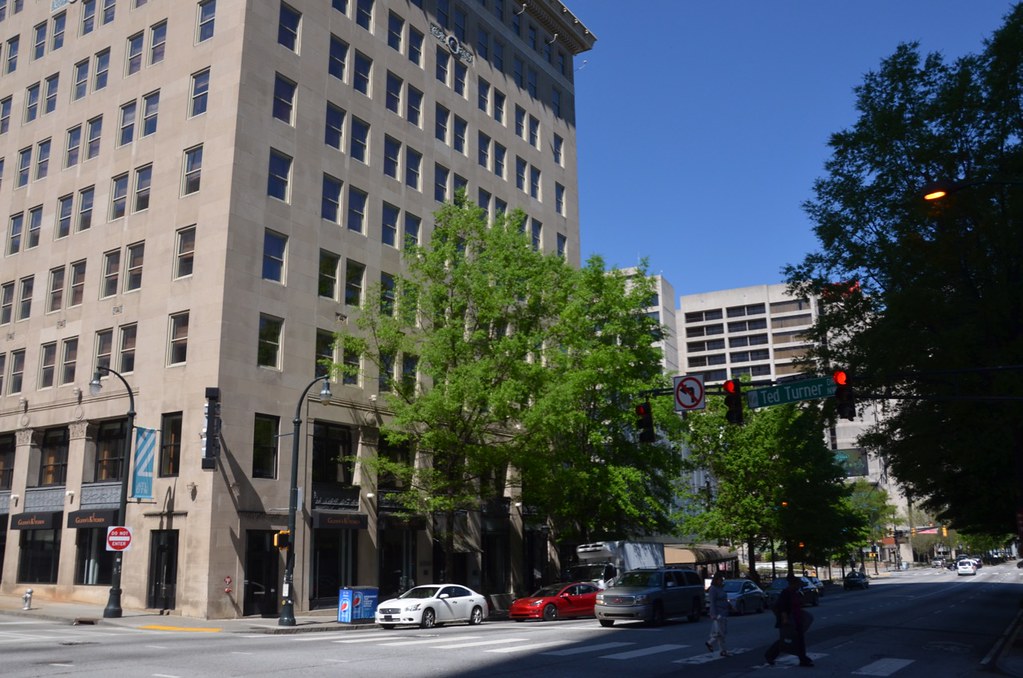 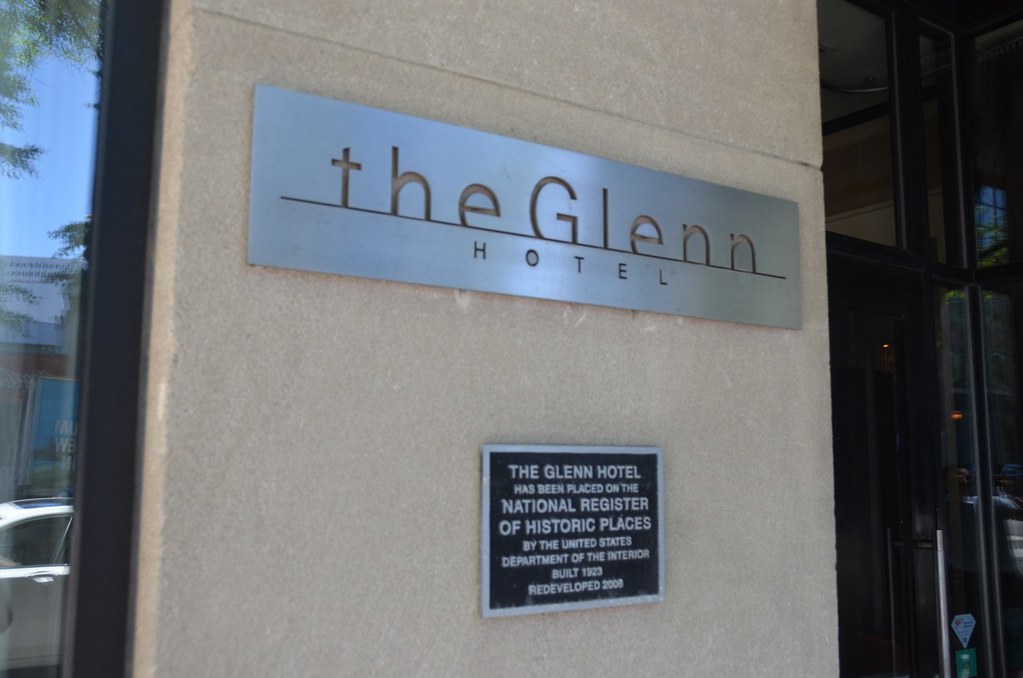 The lobby was an attractive area and they’ve done well for such a small space. One side of the lobby is dominated by the bar, whereas the other side has the breakfast restaurant. 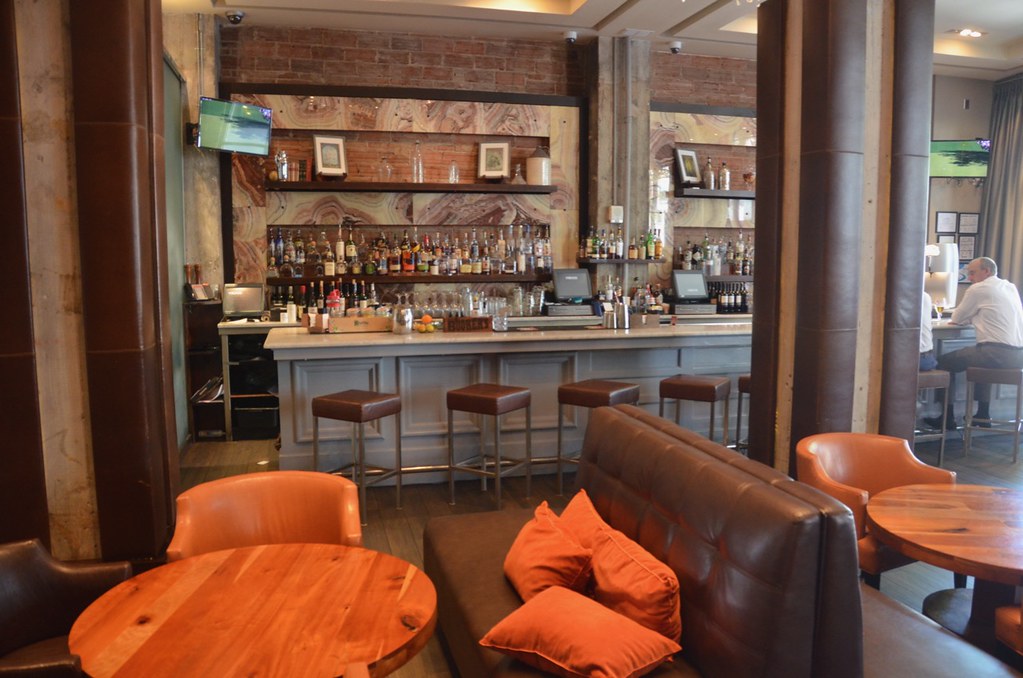 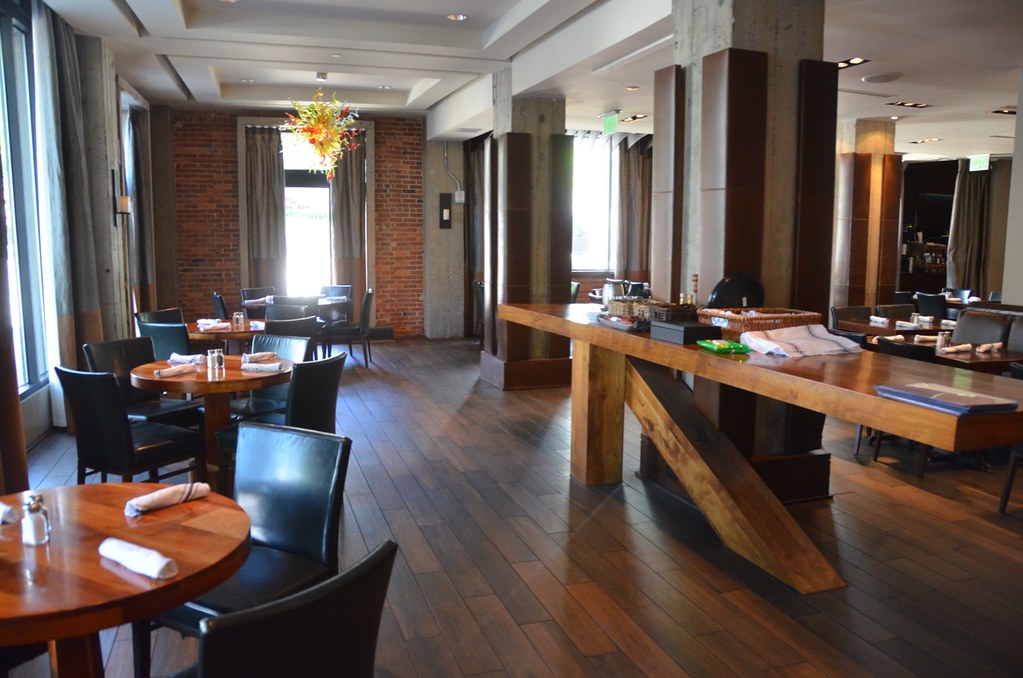 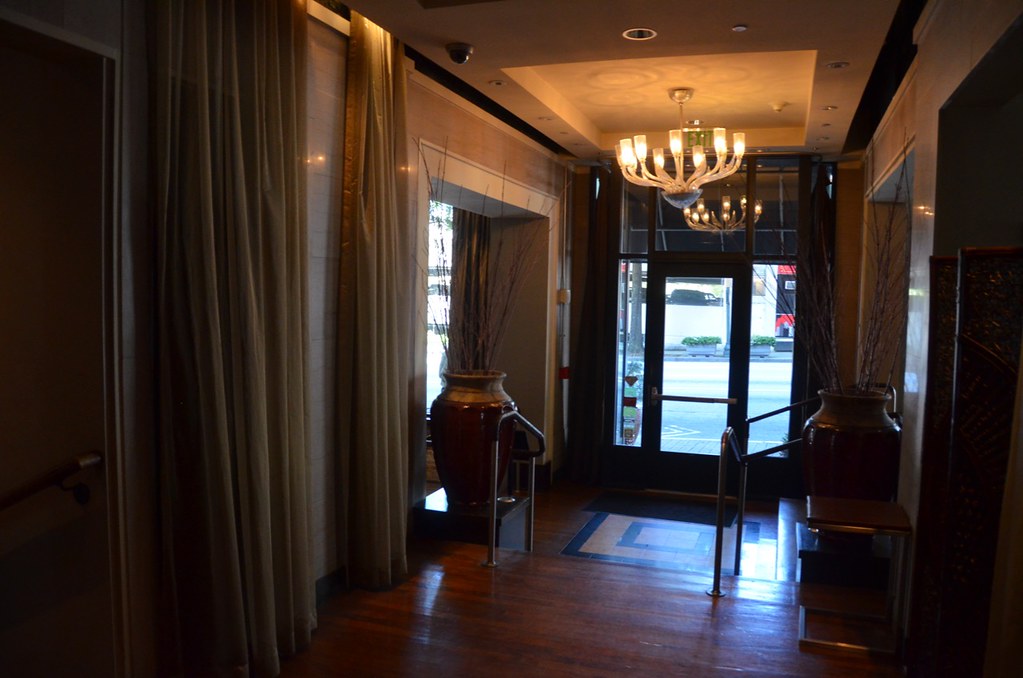 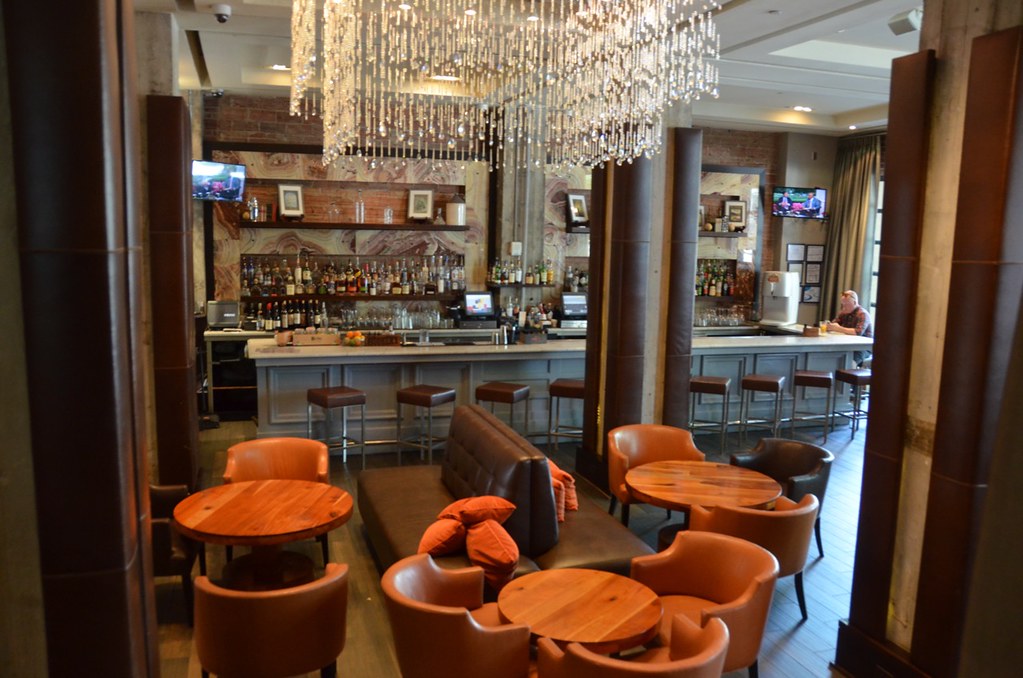 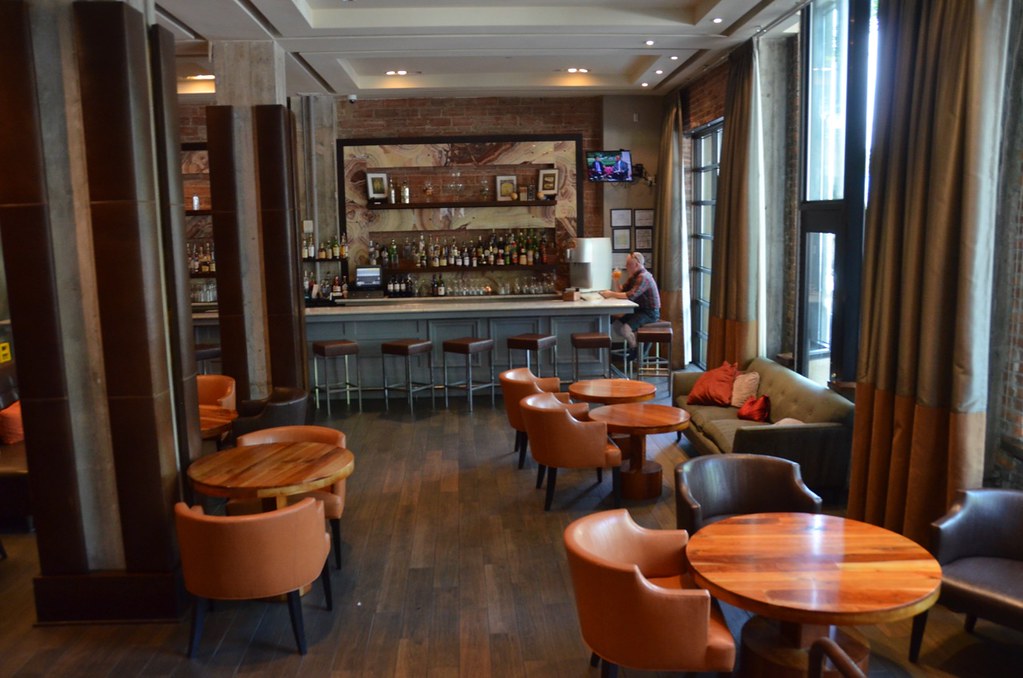 The Room: A Cozy Queen

In short, all of this to say that this means that the rooms are quite compact. Compact for one but really compact for two travelling together.I ended up storing my bag on the floor. 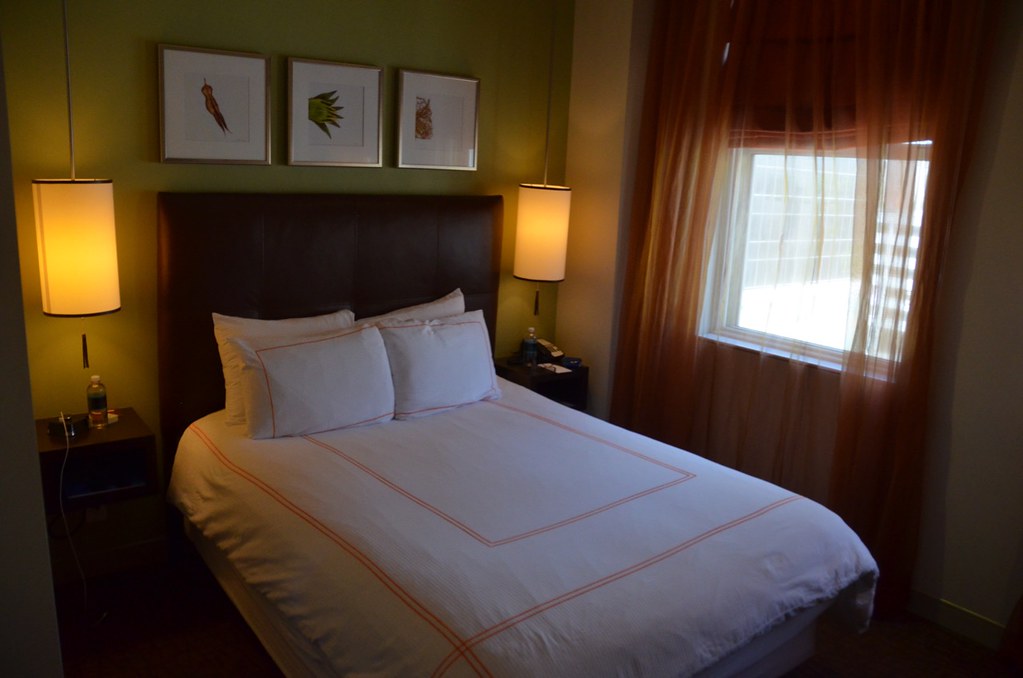 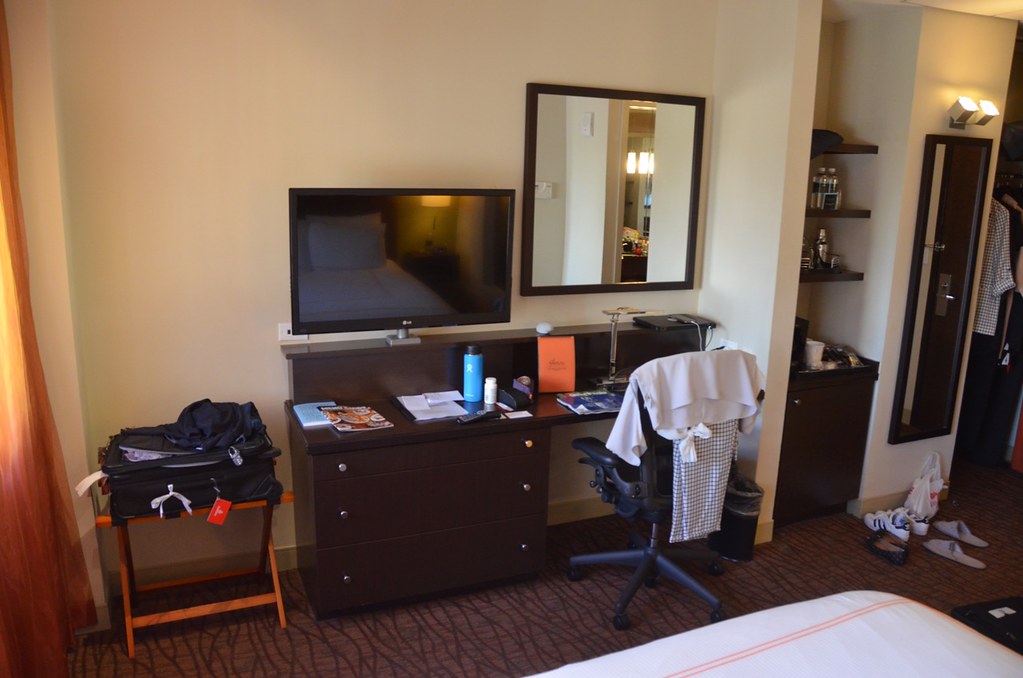 The room was reasonably equipped with a cooler, martini glasses and a renovated bathroom. 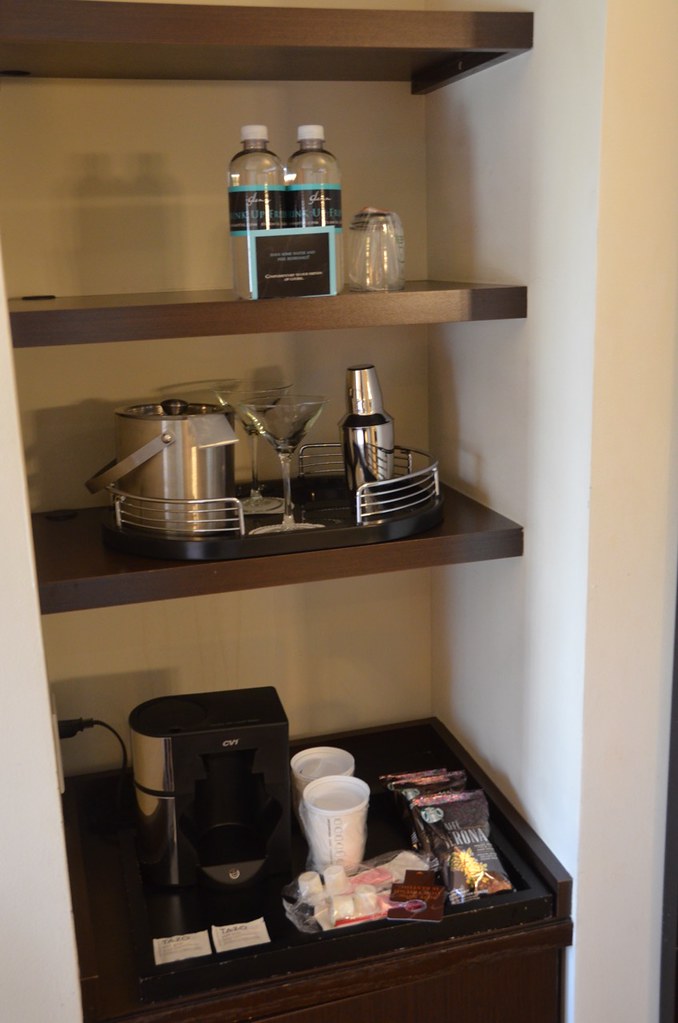 The shower faucet was a bit sticky. It had a shorter wand sprayer and a rain shower that I couldn’t get activated as the switcher appeared to be stuck. I ended up having a Lost In Translation “Short Shower” the first morning. 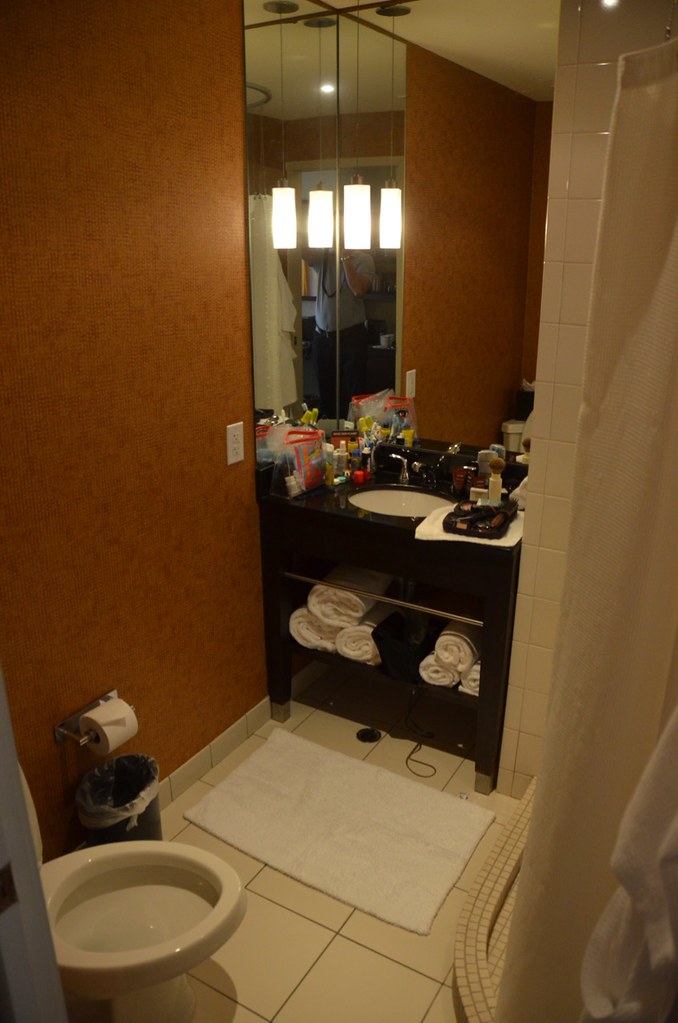 Food, Beverage and Breakfast at the hotel:

Platinum breakfast at the hotel involved a choice of two items off of the special menu. 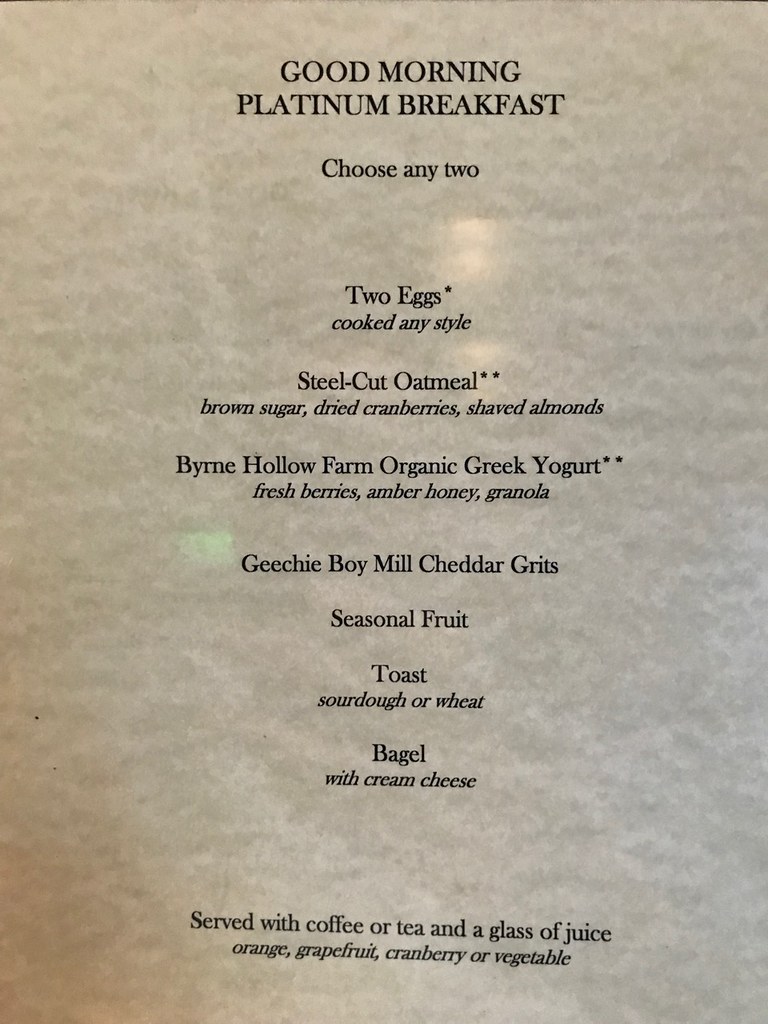 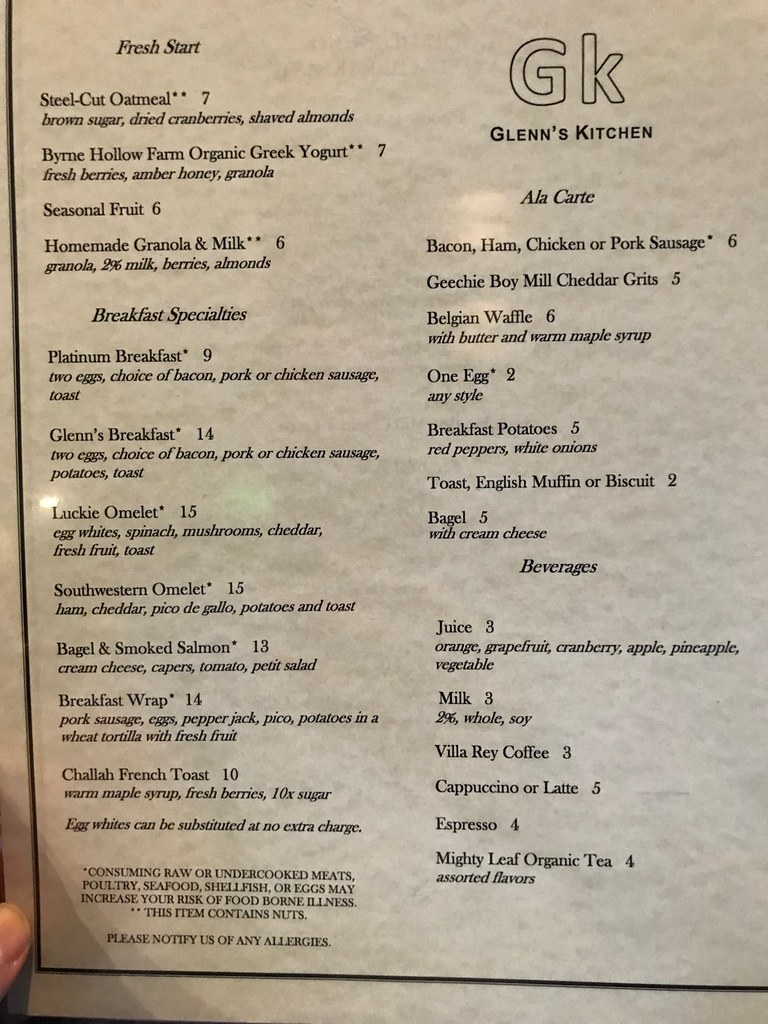 One of the better features of the hotel that’s worth mentioning was that it offered a happy wine hour between 5:30 PM and 6:30 PM every day in the hotel lobby bar. Although I expected this to be an upsell for supper hour, they weren’t too active with the food offerings in the lounge side. The crowd was mostly mid forties business travelers in suits unwinding after the day with their colleagues.

The hotel was immediately next to the Atlanta Centential Park that was refreshed for the Atlanta Olympics in 1996. Instead of the hotel offering a gym, the park became my circuit for running during my stay here.

In summary, it was a reasonable stay for a shorter trip. The charm of the smaller historic hotels would get wearing after a while for those that were regularily traveling for work purposes. I doubt I would be in a rush to return, instead opting for the newer Westin or other hotel offerings around town.