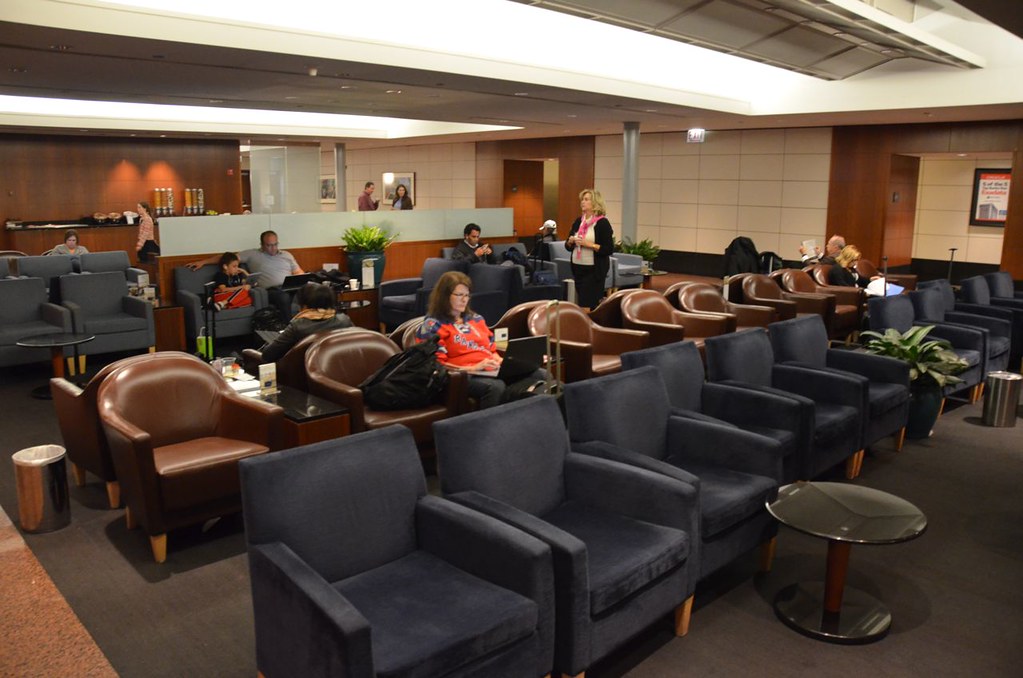 The City of Chicago in the United States of America is a focus city for United Airlines. Being one of their major mid west hubs for travel within the region, both on United Airlines and other Star Alliance carriers, it offers flights to almost anywhere. During our travel through Chicago O’Hare, we happened to be connecting through to South America. During our lay over, we stopped in at two United Club’s to pass our time.

“Situated in the outer concourse, the secondary United Club at Chicago O’Hare that lots of square footage and ample views from many windows.”

The United Club is located in the outer concourse where the Concourse is Primary occupied by United Airlines and occasionally, Lufthansa. You may need to get here by using the under ground tunnels, or perhaps directly if you are connecting through Concourse C off of other Star Alliance flights.

The main access point is immediately across from Gate C17. Like it’s sister lounge in concourse B, given it’s central location, it’s pretty easy to locate. Unlike the sister lounge, this lounge is all on one level and there is no need to use escalators to access the lounge space.

The United Clubs have a variety of methods in order to gain access.

A boarding pass for travel in first class on a Star Alliance member airline: Customers may only access a United Club location at the departure airport for their international first class flight. One guest is permitted.

A boarding pass for travel in business class on a Star Alliance member airline: Customers may only access a United Club location at the departure airport for their international business class flight.

Active duty US Military Members: Active duty United States military members with a valid military ID, boarding pass for travel within 24 hours on a United- or United Express-operated flight and one of the following:

Access to the United Club lounge today was provided courtesy of an international business class ticket on an outbound Star Alliance Flight. We were connecting onto Sao Paulo, Brazil on United Airlines later that evening and this qualified us for access.

Inside the United Club Lounge:

Once we were inside, we arrived to the most tired looking lounge of the whole trip. The decor of the lounge was reminiscent of an office conference area of a men’s golf country club. Like it’s sister lounge, there were stacks of seating areas in loungers throughout the lounge making it easy to find a place to sit.

Thanks to lots of square footage in the lounge, there were lots of in flight monitors available to monitor the evening’s departing flights.

There were the usual light bite offerings here typical of a United Lounge. These included the usual snack silos and cello wrapped Tillimook Cheese. The usual United Club snacks were on offer, although most were being packed up already at 8:15 PM., 75 minutes prior to the lounge closing.

Consistent with all other United Club’s, there was also a full service bar. The bar had a bit of a crowd tonight thanks to a game being on.

My thoughts on the United Club Chicago Terminal One Concourse C:

The United Club Chicago Terminal One, Concourse C is my preferred lounge at Chicago O Hare Airport. Although it doesn’t have the large ceilings of the Concourse B Lounge, it has lots of space to stretch out and sit with great tarmac views thanks to great windows. It’s also typically a quieter experience thanks to less passengers in the outer concourse.