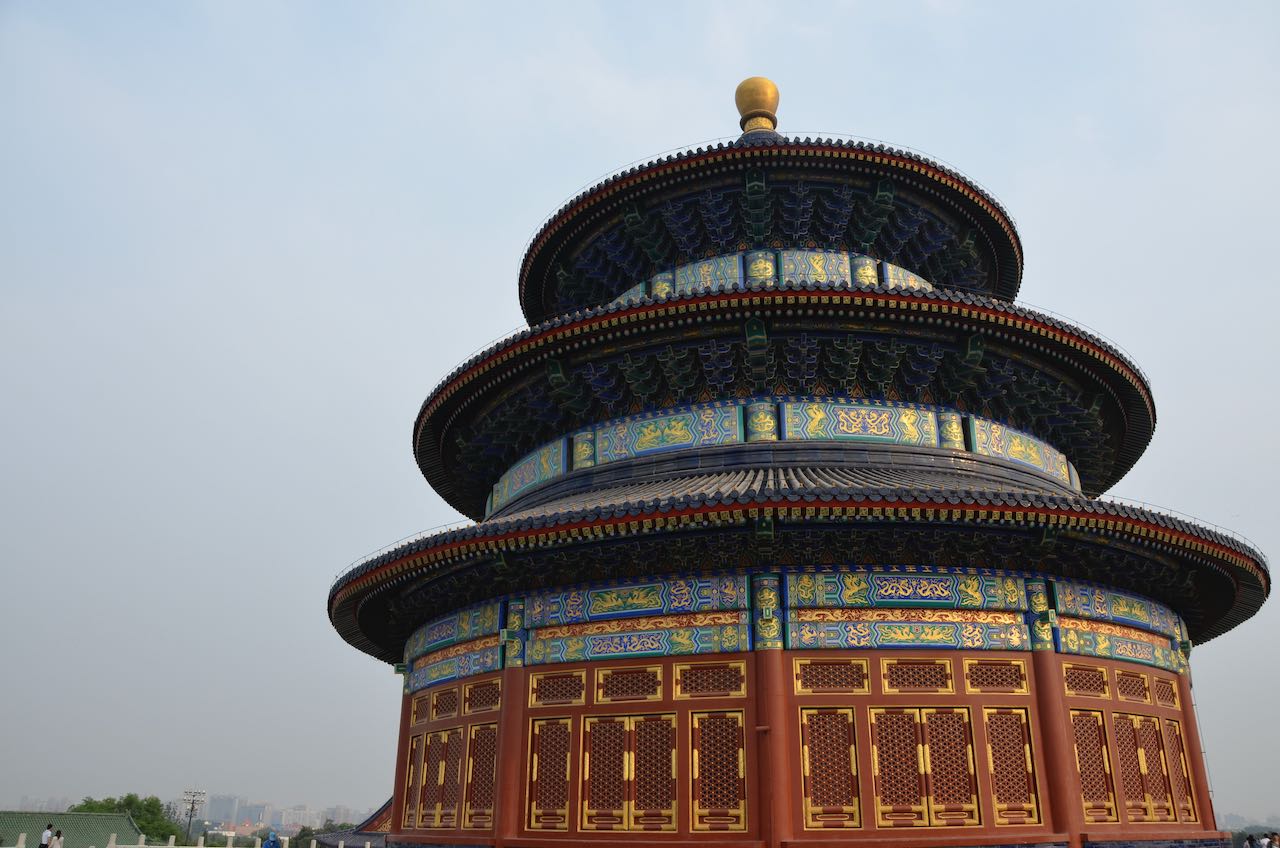 A visit to Beijing, China provides the opportunity to glimpse into one of the worlds greatest historic cities. Sightseeing here is some work, but if you put the effort in, you’ll be well rewarded with what you find.

This post is one chapter in our Around the World in Star Alliance First Class via China, Thailand and Spain. This trip was booked using Air Canada Aeroplan miles. For more information on how this trip was booked, please see our trip introduction here. For other parts of the trip, please see this index.

We had a good two day visit back in Beijing. It was my second opportunity to visit the city in 2012 (after the 2008 Summer Olympics), with my first visit back in 2005. It was MrsWT73’s first visit to the city so we opted to include both traditional and contemporary attractions.

Our first visit was to the Temple of Heaven. The Temple of of Heaven is a complex of religious structures that weree initially built in 1408 to 1420. The complex was visited by the Emperors of the Ming and Qing dynasties for annual ceremonies of prayer to Heaven for good harvest.

It was a neat and peaceful place to visit. It was one of the leading tourist attractions in Beijing and visited accordingly.

We had a large walk around Tiannamen Square. Tiannamen Square is a city square in the centre of Beijing, named after the Tiananmen (‘Gate of Heavenly Peace’) located to its north, separating it from the Forbidden City. The square contains the Monument to the People’s Heroes, the Great Hall of the People, the National Museum of China, and the Mausoleum of Mao Zedong. Tiananmen Square is within the top ten largest city squares in the world ( 109 acres ). As a result, it is truly impressive when you walk through it.

The Forbidden City is a palace complex in central Beijing, China. It houses the Palace Museum, and was the former Chinese imperial palace and state residence of the Emperor of China. The Forbidden City served as the home of Chinese emperors and their households and was the ceremonial and political center of the Chinese government for almost 500 years.

Constructed from 1406 to 1420, the complex consists of 980 buildings and covers 72 hectares (over 180 acres).The palace exemplifies traditional Chinese palatial architecture, and has influenced cultural and architectural developments in East Asia and elsewhere. The Forbidden City was declared a UNESCO World Heritage Site in 1987, and is listed by UNESCO as the largest collection of preserved ancient wooden structures in the world.

Inside the walled Forbidden City house all the structures related to the past government. The city has several layers of walls that surround the further Imperial City.

The Forbidden City is accessed from the North by the Gate of Divine Might. On my trips through here, I’ve always started at the south end near Tiannamen Square and moved to the North End, exiting at the Gate of Devine Might. Near the gate, there is the neighbouring Jingshan Park. The hills of the Jingshan park provide a good overlook to the area and are a great way of getting a larger perspective on the Forbidden City itself.

We also had a quick night walk through the Donghuamen Night District, which is east of the Forbidden City South Entrance. It was a vibrant place and had lots of people out in the cooler evenings.

This was an interesting side diversion to the trip that was worth the time to see some regional interests.

There is always something to see in Beijing between it’s many historic attractions, interesting culture and changing history. My second visit to this massive city certainly led me to new adventures and new sights. There is so much to see here that I’d still be seeing new attractions on my third, fourth and fifth visits.