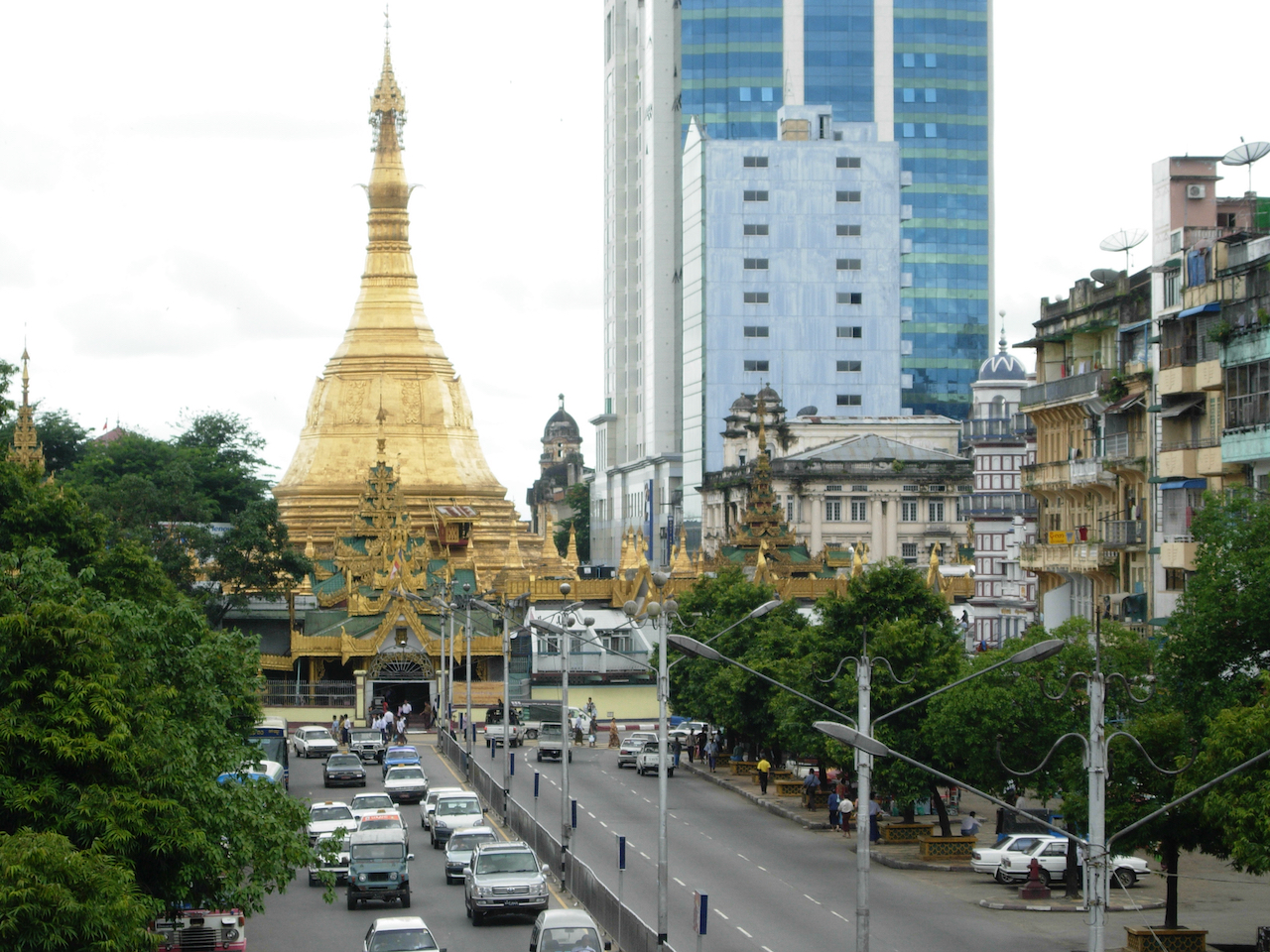 Read more from this Trip

“A walking tour through Yangon is like a trip back in time. A developing city, mixed in the cross roads of 2,000 year old religious shrines, low rise tower blocks mixed with street markets makes for an interesting sightseeing day”

The next morning we took another $2 taxi into the heart of downtown Yangon. Visiting in September, it was rainy season and the city had a very gray and dark appearance. Its industrial charm poked through with some old British structures that had long been forgotten. The sidewalks were covered with vendors selling products and food in between crumbling structures new and old.

We first visited Sule Paya, which is in the middle of the city. It’s not every city that has its center marked with a 2000 year old temple with a traffic circle that surrounds it. The mix of a old temple surrounded by newer Asia and their apartment blocks makes for a stunning contrast for life in what was one the capital of the country.

After a quick visit there, we set out on a walking tour around Central Inner Yangon, which was previously set up in a grid street system thanks to the British. Many of the buildings were over run with plants and run down. The Colonial Architecture was evident in some structures. Repairs were slowly being conducted on others. Some other buildings had a uniquely Asian stone look to them which I haven’t seen anywhere else. At any rate, there was a stark absence of any franchising or signage of the usual Western products. The Burmese script on the signs was also exquisite and interesting. The walk around town a mix between decaying parks and through streets and covers set up due to the rain. There was a complete lack of western tourists on our visit. The City Hall is pictured below over looking Mahabandoola Garden.

Throughout the streets, there were street markets with vendors open for lunch.

Many of the streets were ripped up, but instead of modern day construction and paving equipment, many of the repairs were mixed and dug by hand. We ended up wandering through the central market in Yangon; the Bogyoke Aung San Market. As can be expected, there was a whole assortment of stuff for sale. The market has been operating for 70 years and used to be called under its British Name “Scott’s Market”. The majority of the items were fabric to create the elegant longyi’s wraps that many wear out and about around town.

After a quick stop for some wonderful Chicken Biranyi with rice for lunch at the Nila Biranyi Shop, we wondered over to see the local circular train that runs around Yangon. The Yangon Circle Line runs in a circle around the city and is a means of discovering commuter life in the city. It was a relic from a different era, but in terms of a train buff, it was a pretty neat thing to see.

We further wandered down to the water area surrounding Kandawgyi Lake. It was a nice picturesque and grey area despite the clouds. The water walk way had Shewdagon Paya peeking through in the background. It was a pretty wet experience and we got throughly soaked halfway through our walk.

After we got a little soaked from the train, we headed back to the hotel for a little dry off, before headed on to the main attraction of the city, the gorgeous Shewadgaon Paya.

“Yangon is the place to visit if you’re looking for old Asia, before the tourists arrived. You’ll be mostly on your own here. Pre-plan accordingly”

Yangon itself somewhat reminds me of what South East Asia may have been like many years ago. Although there are cars and trucks running around today, the markets and food vendors are from an older era. They transact in cash. The lack of franchising and other western influences is pervasive throughout the city. The lack of western tourists was astounding. All of this adds up to a wonderful and safe travel experience that is unique in the world in exploring one of the world’s newest cultures.