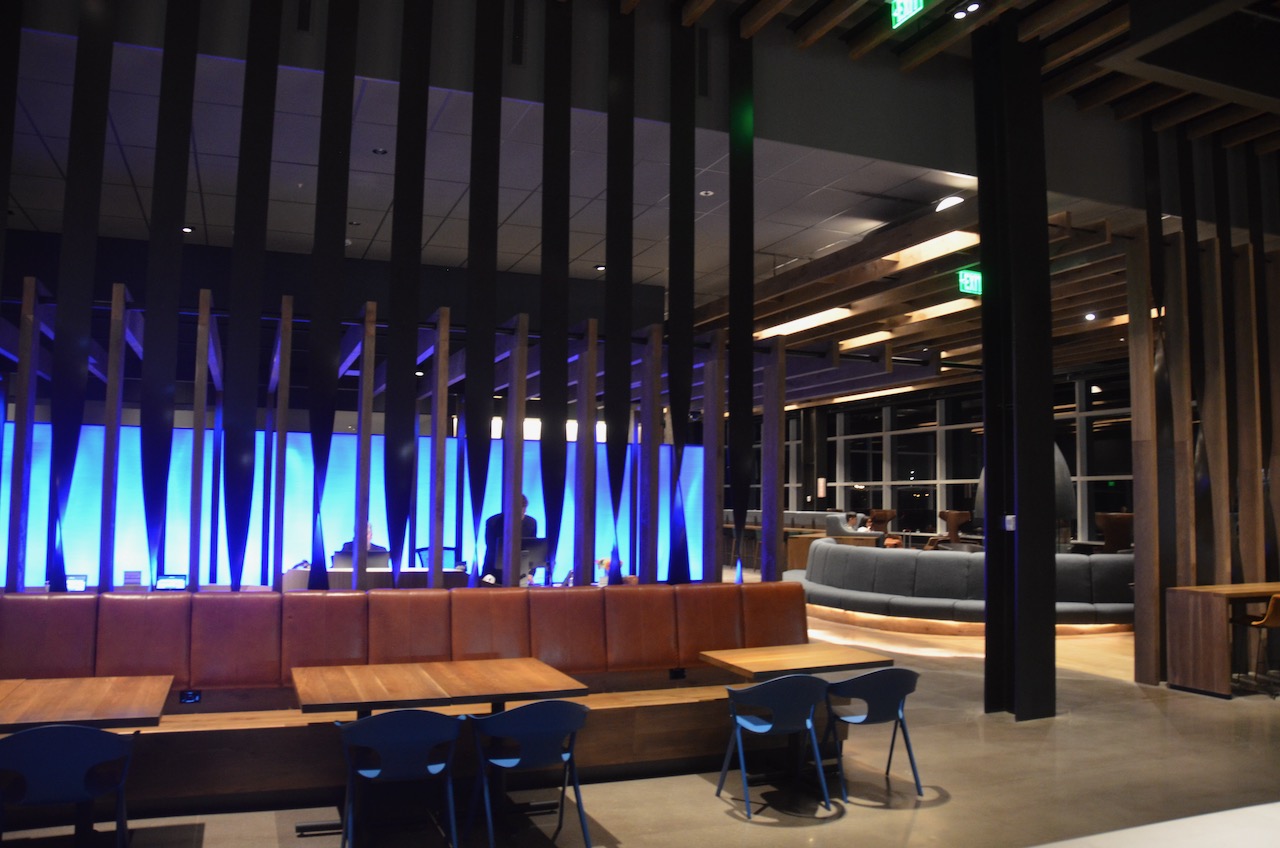 We happened to end up disembarking in the North Satellite at SEA-TAC. The North Satellite has undergone a bit of a re-birth over the last view years. Our visit happened to coincide within 7 days of the brand new flagship Alaska Lounge opening. With the window coverings finally taken down, we were keen to see what Alaska now had to offer.

The lounge is located on a new third level above the North Satellite in an expanded area. We took the elevator up since there were no stairs. We were entitled to access as we were on a same day Alaska Mileage Plan First Class award. Although there was no First Class cabin on our departing propellor Alaska flight (single class of service), the agent was able to scan our inbound Alaska First Class DFW-SEA boarding card on the scanner, and we were easily admitted access. Unfortunately, the Seattle Alaska Lounges have dropped out of Priority Pass, so the only way in is through a confirmed paid or reward (not upgraded) Alaska First Class ticket, an annual Alaska Lounge membership or a reciprocal lounge membership such as AAdmirals Club.

The lounge itself is nicer than any other Alaska Lounge that I’ve previously been to. However, that’s not saying all to much. The lounge is a marked upgrade from the usual older Alaska Lounge experience. The lounge was decorated like a dark “W” Hotel, with contemporary blues, greens and blacks. The size of the lounge is much larger and occupies the whole half top floor of the North Terminal, with large day light windows on 3 sides of the lounge.

The lounge offers a beautiful gas fireplace, similar to the Iceland Air Saga Lounge in Reykjavik.

There is a large bar at the east end of the lounge with top shelf liquor available for purchase. The Alaska no tipping policy seems to have been maintained, and the usual dollar bills across American airline lounge bars are not seen here.

There is a large coffee bar with available cappuccinos, along with the usual small Alaska cheese cubes. The food service station is so large, it almost dwarfs the small offerings that were out at the time of our visit.

Alaska has also gone upscale and now offers pay for purchase foods in the lounge, with menus across many tables. It didn’t seem like the kitchen was open at 10 PM when we stopped by.

All in all, a nice space and Alaska has a lot to be proud of with this lounge. Hopefully, I will get the opportunity to come and visit again on a day light layover in the near future. Without Priority Pass access or an annual membership, paid First Class remains the easiest way to get in.