We departed the lounge after a 30 minute visit. We needed to take the train over to the C terminal, but I forgot that the C Terminal Train station was temporarily closed for renovations. As a result, we had to get off the train at the D Terminal and walk back to the C gates.

We passed by duty free, which had already closed for the evening. It’s a good thing we had already purchased our duty free in Australia by taking wines back from the cellar door well buried in our checked bags.

We arrived to the usual boarding show mess at the propeller gates.

We boarded the usual Q400 at Gate 1. We had some Horizon Air mechanics on board with us tonight that were headed up to fix another Q400 that was AOG (Aircraft on Ground). 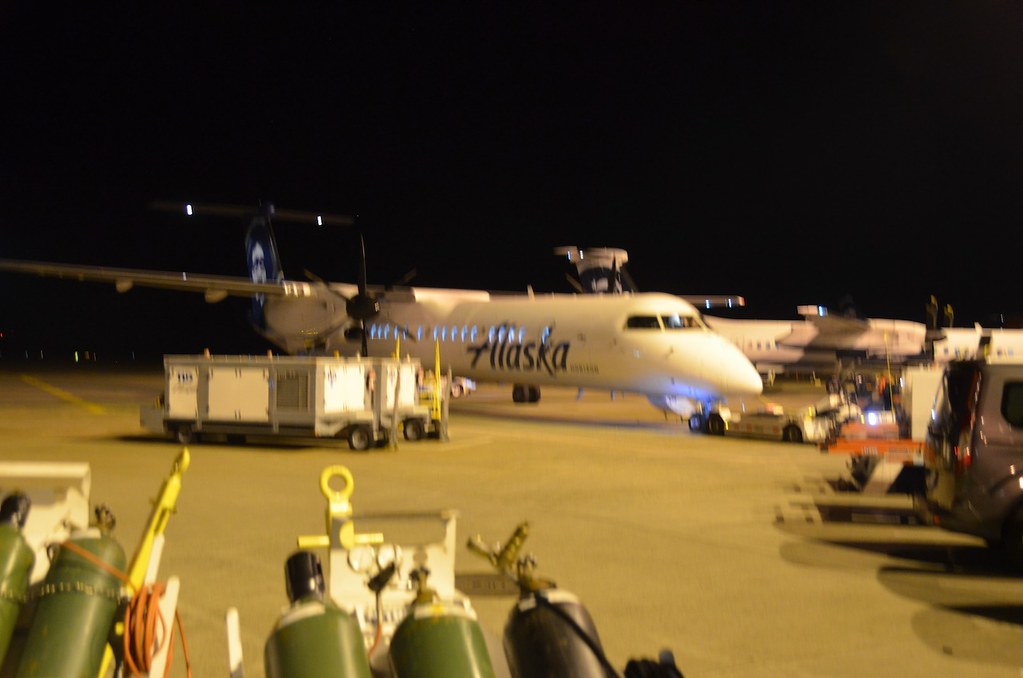 We were somehow asked to move from our assigned Seat 2A and 2C to Row 19 in order to weight balance the plane. We ended up in 19B and 19C with two empties beside us. We later were offered biscotti cookies and Alaska miles in compensation. Alaska was able to give us 1,000 Alaska Miles each. These turned up in our accounts within 4 days of returning home, unlike my recent Air Canada service delivery issues which were promised but some 30 days later still haven’t turned up. The offer was pretty reasonable for gaining an empty seat next to you and waiting and extra 120 seconds to get off the plane.

We landed in Vancouver in a warm summer evening. I was sent into secondary by CBSA at Nexus for my T2 tea bags that I had declared. The Canada Border Services Agency customs agents looked disappointed when I rolled into the stainless steel counter top secondary screening area and told them I was here because of “(T2) tea bags”. I was stamped out and sent on my way really quickly.

All in all, a great trip to Australia. The Qantas First Class is a great way to get to Australia. I’d love to use them to connect from the Americans to parts of Asia the long way around but it doesn’t seem like I’ll be able to do that any time soon. At any rate, the trip was a terrific value for Alaska Mileage Plan and I’d easily do another trip with them soon.

Thanks for following along on another great trip.

There’s some serious fog out there lately…
Rising above the Valley clouds, Blackcomb, Canada 🇨🇦
Snowy sunshine under bluebird skies, Blackcomb Mountain, Whistler, Canada 🇨🇦
Gorgeous skies atop of the clouds at Whistler, Canada 🇨🇦
Stopping by the old United Global First Lounge in San Francisco, USA 🇺🇸
Get in on the comfortable United Polaris First Class from Honolulu to the Mainland while it still lasts!
Here’s to dreaming of more First Class Travel in 2022…
Diamond Head Views, Honolulu, Hawaii, USA 🇺🇸
Advertisements