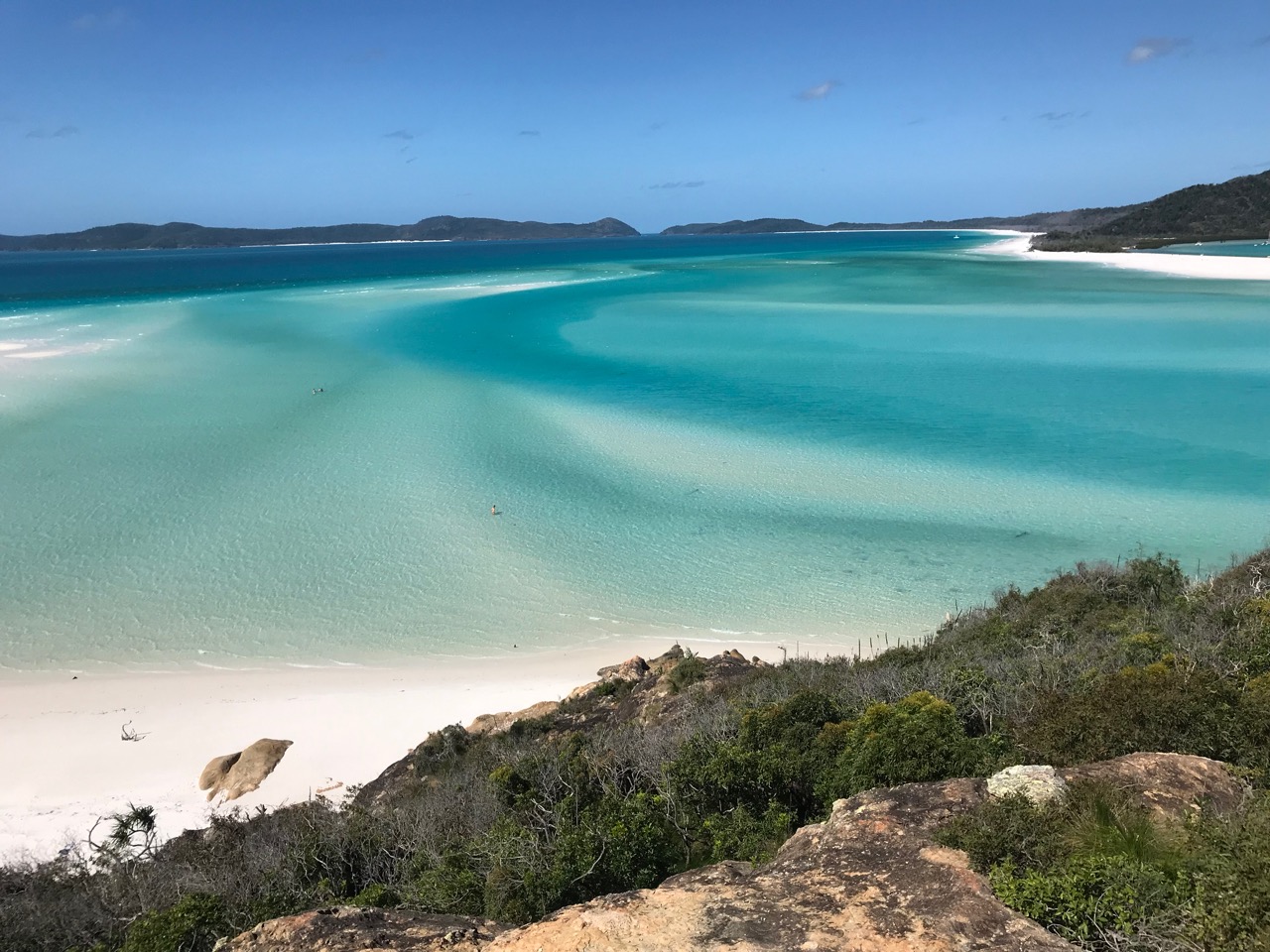 Since our catamaran boat trip around the Whitsundays’ had been cancelled, we couldn’t come all this way without getting out to Whitehaven Beach. We were supposed to visit on our boat cruise but since that was no longer, we had to make other arrangements to get out there to see one of the best attractions this part of the world has to offer.

We booked with the main operator, tour Whitsundays through the Qualia hotel. Qualia was able to handle the booking without any issue and with no additional 2% credit card fee that seems to be prevalent in this part of the world. The end routing was Hamilton Island Harbour – Whitehaven Beach – Hill Inlet – Hamilton Island Harbour.

After a Qualia Breakfast, we self-drove ourselves by golf cart down towards the harbor in our supplied golf cart. We met at the Cruise Whitsundays dock down at the Hamilton Island Harbor for 7:50 AM.

We boarded up the boat. The tour operators split us up into separate groups for a briefing as there were some others that were participating in only the half day tour. We were given instructions for our pre-assigned tour time to Hill Inlet, which was included the price of only the full day tour.

We headed out on the 30 minute journey to Whitehaven Beach. It was a bit windy today and the seas where quite rough. There were several people getting sick on the journey and I was really happy to have enjoyed taking Gravol before setting off. Despite this, it was much shorter than our trip to Hardy’s pontoon.

Landing onto one of the world’s finest beaches:

On arrival to Whitehaven, we immediately entered into calmer protected waters. The staff set up a tent on the beach and we all disembarked via the front stairs. The beach was at high tide and as a result the boat had enough clearance in order to land.

Our assigned time was 10:45 AM for our tour to Hill Inlet. As a result, we set up on the beach for some sunning for about 60 minutes prior to us having to present ourselves to the tender to take us to the other side of the island. There were some aggressive birds on the shore after food. They certainly made their mark.

Whitehaven Beach is an absolute stunner with miles of white silica sand that is among the finest sand in the world.

Happy to have made it, despite original travel plans gone awry.

It had been over 23 years since I had last been through there. The Australian Government has spruced up the place in that time with signage and other features of a modern eco-park.

At 10:45 AM, we took a small boat over about 15 minutes over to Hill Inlet. Hill Inlet is located at the opposite end of the beach. There isn’t any way to get there other than by boat, and it seems to be a common stop in the boat charter or tour package. We passed along the length of Whitehaven Beach which was mostly deserted aside from the occasional private helicopter charter.

We landed on the beach and had a look around. There were some trees that had been deposited on the beach as a result of Cyclone Debbie that had passed through the area about 2 years ago. The trees made for a picturesque photograph.

We started the hill climb of about 15 minutes in order to get up to the 3 viewing platforms. There were a few spiders and snakes spotted on the climb but nothing overt that would freak out MrsWT73 all too much.

Once we were up to the viewing platforms, we were treated to absolutely gorgeous shapes of blue, green and turquoise. The greens were apparently water from run off mixing with the salt water in the water.

It’s hard to beat a view like this. It’s hard to believe that it’s winter in Australia; perhaps with the exception of the light jacket that I was wearing.

After the viewing platforms, we got on to the boats back to Whitehaven Beach where they had set up a beach bbq for us for lunch.

We spent the rest of the day lazing in the fine sand in this pristine part of the world.

We had to line to tender back to the boat since the tides had gone out. It took about 20 minutes to get us all back on board, which was the only low point of the day. It was less than an hour to get back to Hamilton Island.

Our Last Sunset at One Tree Hill:

When we got back to Hamilton Island, we scampered up to One Tree Hill for our final sunset of our stay. Call us creatures of habit, but I’ll make time in the day anytime for sunsets like this.

All of which brought close to another spectacular day in this island paradise.

It came all too soon to depart Qualia for the last day. Our 4 day stay here was truly terrific and among one of my top stays worldwide in terms of hotel management and overall service experience. We really enjoyed the room and private facilities; just the thing that we both needed as busy executive types in our real-world life. Time away together just relaxing without interruptions is all you can ask for in a great relaxing holiday. We took in a few last moments in the hotel lobby while we waited for our van. In a nice touch, the hotel even offered coffees or teas with wait staff while we waited.

As we had surrendered the golf cart, we were transferred down to the Harbor in a Qualia van. The hotel came and collected the bags from our villa without any issue. We boarded a smaller Cruise Whitsundays boat destined for Airlie Beach via Hamilton Island Airport, DayDream Island and eventually Port of Airlie.

It was a scenic morning cruise back with not many people on the boat. We took the opportunity to sit on the upper deck and get in some sun in preparation for sitting in the tube later (airplane) today. The coast line was terrific and eventually the islands got to be more spaced out as we cruised out of the Whitsunday Islands group.

A quick stop at Daydream Island…

Before eventually arriving back to the mainland at Airlie Beach… A town which has grown up quite substantially in the last 23 years.

Our Hamilton Island stay was absolutely a spectacular experience. I couldn’t say enough nice things about Qualia; they were accommodating and our time there was very special. We would easily return in the spring or summer months.