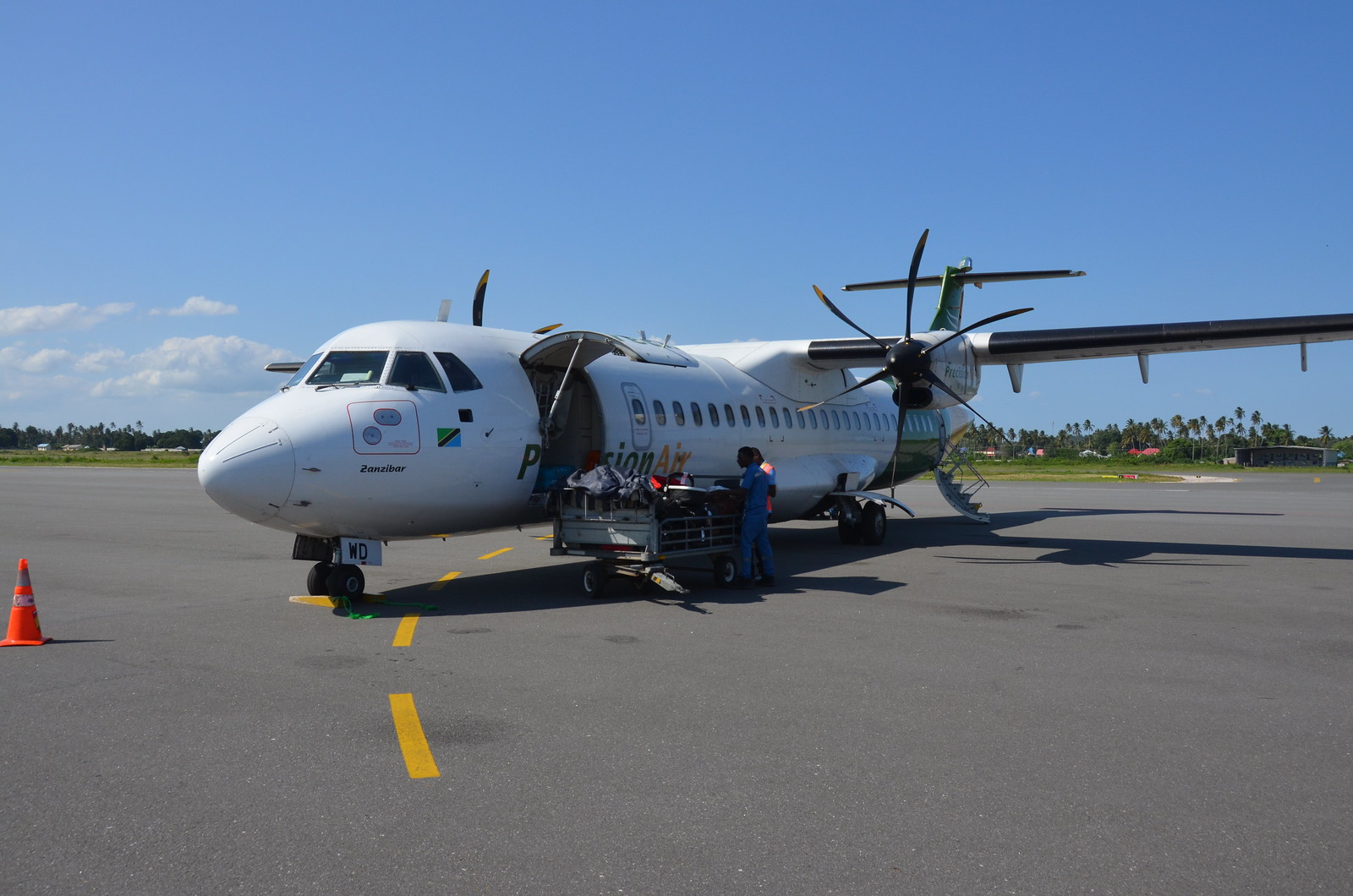 Precision Air is one of the regional carriers that offers service throughout the Republic of Tanzania and some select international destinations such as Nairobi and Entebbe. It is partially owned by Air Kenya, although has experienced some financial difficulties over the years. How would their service stand up for our short hop over to Zanzibar?

This post is one chapter on our trip to the Republic of Tanzania and the Islands of the Seychelles. This trip was redeemed through Air Canada’s Aeroplan and enhanced through World of Hyatt and Marriott Bonvoy Elite Status. For more information on how this trip was booked, please see our trip introduction here. For other parts of the trip, please see this index.

It came to be departure day from Zanzibar. We took a hotel car / van from The Park Hyatt Zanzibar to the airport. Mid way to the airport, I realized that my phone was missing. I had about 60 seconds of sheer panic before I realized that it was on the floor of the taxi. Thankfully we didn’t have to go back.

We had some interesting sights on the way out . . .

Getting into the airport, there was a document check, followed by a cargo and hand luggage security check to get into the airport. The process of getting inside the airport itself was moving very slow and we had about 15 minutes here despite having only 7-9 people in front of us.

Inside the Zanzibar International Airport:

Once we passed the security check, we entered into a very austere and African airport. It only had the bare necessities and just the minimum of what was needed to function as an airport.

The Precision Air check in desk was not marked so we went to the only manned counter and self-identified ourselves. Our checked bags were weighed on large scales but they didn’t have any interest in our hand luggage.

Our boarding cards were printed off and we proceeded around the corner to what we initially thought was the holding area. Instead, it was a loop around to where the international passengers cleared immigration and the hand luggage security check occurred.

We passed through both and waited on the secure side. We were amongst a large German tour group that seemed to be waiting for the daily Ethiopian Air flight to Addis Ababa via Kilimanjaro.

There wasn’t much here in the departures lounge to keep you entertained while you wait for your flight. There were a bunch of flat screen televisions that were showing local news and a Zanzibar Transit Duty Free Shop.

I managed to find a few Zanzibar “Remove Before Flight” styled hang tags (without the text) for 6,000 TZS ($3 USD). They’re now rolling around attached to my carry on.

We didn’t make an attempt for the Ethiopian Cloud Nine lounge with its ornate doorway. It was also a Priority Pass location at the time of writing.

Our scheduled boarding tine of 1:50 PM that was printed on our boarding cards came and went. Before we knew it, our flight departure time of 2 PM also came and went. There were no flight announcements, nor was there a flight display screen in the hold area (or anywhere else in the airport for that matter) to keep people updated. At about 2:15 PM, a Qatar Airways flight arrived so the few ground crew in attendence appeared to be more pre-occupied with them.

The airport did have fast and free wifi. It was actually faster than at the Park Hyatt. I tried to get on Flight Aware and the usual websites to track where our plane was but didn’t really get anywhere; other than understanding that the flight was coming in from Arusha and continuing onto Dar Es Salaam. It seems like Africa doesn’t really flow into these tracking systems as much as North America or Europe.

At about 2:35 PM, the plane landed. We headed out on to the apron for the walk to our plane. We passed by the Ethiopian and Qatar planes that had recently arrived.

It was no jets for us… instead another ATR-72 for our short hop over to Dar Es Salaam.

We ended up getting on board at about 3 PM, or about one hour behind schedule.

On Board Precision Air:

The seating configuration on the Precision Air ATR 72 is in a 2 – 2 configuration. The seats are covered with deep emerald green leather.

There was a freaky family of four that was travelling along that had about 6 carry on’s between them in the form of backpacks and camping bags. They were a bit upset at the Precision Air gate crew for “losing all their luggage’ on the way over, so they somehow got permission to carry six bags all on board with them.

The take off from Zanzibar had us on a due south course which took us over some beaches and what appeared to be new sub divisions under construction. Like on our flight out, the plane was full of dirty scratchy windows making for some challenging viewing.

There were some beautiful sand bar islands as we passed out of the bay of Zanzibar.

Before we knew it, we were over top of rural countrysides as we skirted the coastline towards Dar Es Salaam.

There were also some beautiful shoreline island views of crystal clear water.

On approach to Dar Es Salaam, we flew over the city harbour. I was a bit surprised to see a golf course just outside of the downtown area. It was a bit surprising but I didn’t realize that the city actually had a population of over 5 million people.

The communal housing appeared to be close to the airport as we started touching down.

We landed and we disembarked without any issue. The plane was continuing onto Arusha again, so most of the passengers appeared to stay on board.

We went into the domestic baggage hall where about 10 bags were put out on the conveyor belt. Mine was put out, but unfortunately MrsWT73’s checked suitcase bag was not. Having had it with missed baggage throughout Africa, we promptly got a hold of someone in the baggage claim hall. It turned out that the freaky family was right. MrsWT73 ended up practically crawling through the baggage portal on the conveyor belt to spot her back buried underneath the connections bags. Thankfully we were able to get it thanks to a little pro-active work and avert any delays.

We met our driver outside and transferred back to The Hyatt Regency Dar Es Salaam – The Killimanjaro for the night prior to our Kenya Airways Dar Es Salaam – Nairobi flight the next day.

My Thoughts on Precision Air:

The twenty minute flight of only forty five miles took us over five hours door to door by the time the flight and baggage delays were all said and done. I had heard of a reputation of delays with Precision Air and unfortunately, we did get struck with the delay brush.

The service was friendly as a whole and mostly efficient. However, I figure if we had some problems (like a lost bag or a connection to an onward flight) we would have been thoroughly stuck with little interest or speed on their part to get the issues resolved. Make sure you plan for lots of extra time if you plan to fly with Precision Air.

If you’ve flown Precision Air, did you experience any baggage issues or flight delays ?

Like Loading...
← Crusing into a Sunset on a Dhow in Zanzibar, Tanzania
Review: Kenya Airways E190, Dar Es Salaam – Nairobi →