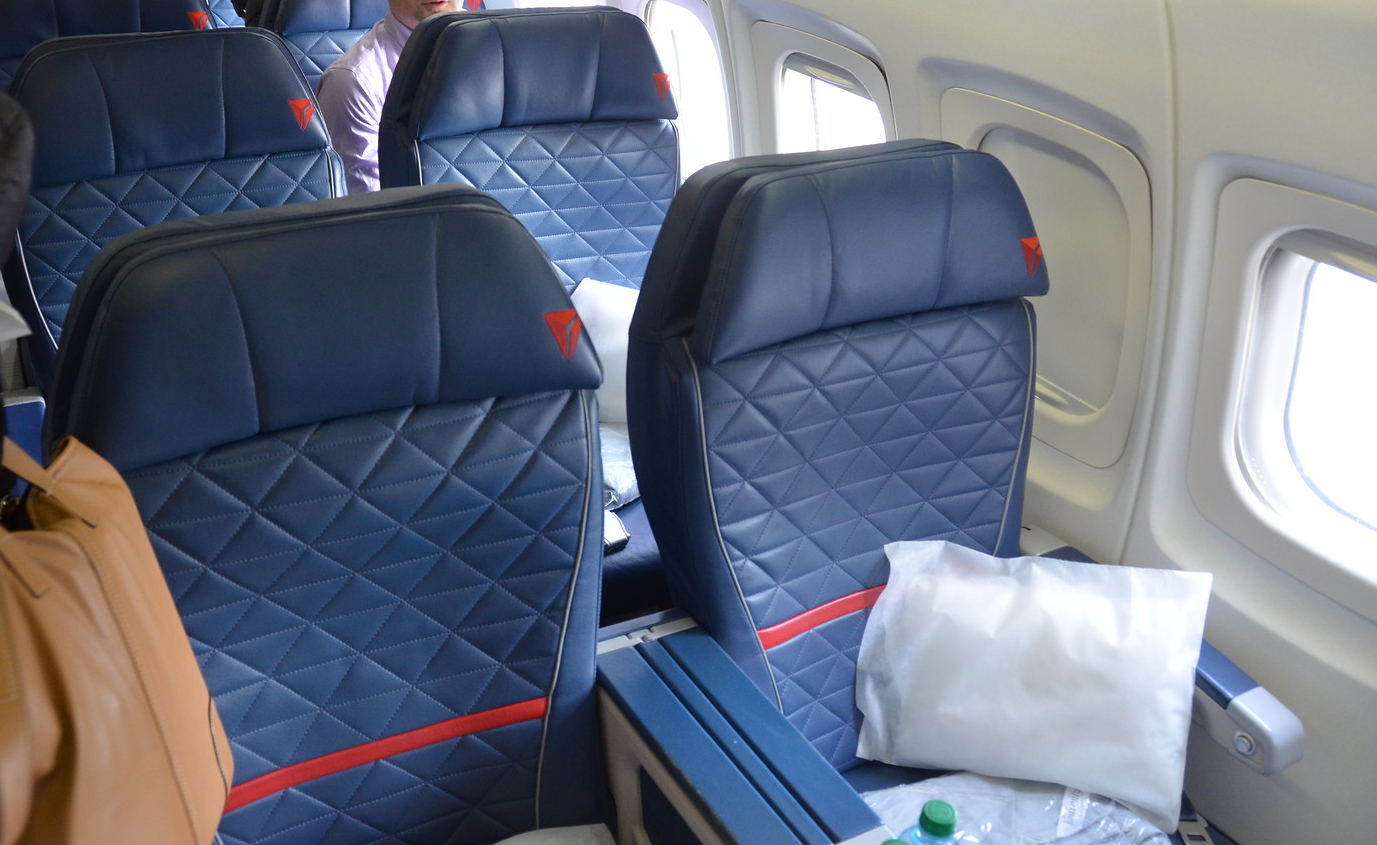 This post is one chapter on our trip to New York City, New York, United States of America. This trip was enhanced through Marriott Bonvoy Elite Status and credited to Alaska Mileage Plan. For more information on how this trip was booked, please see our trip introduction here. For other parts of the trip, please see this index.

We departed the Delta Sky Club La Guardia Terminal C and headed towards the gate at around forty five minutes before our flight. We arrived just as premium boarding was being called. There isn’t a lot of room around LGA gates but we managed to squeak around the crowds and get on board without too many hassles. There was, nevertheless, quite a bit of gate crowding today.

On Board Delta Airlines First Class:

There are no personal entertainment screens on the MD-90 aircraft. Instead, the view from the seat is of a plain seat covering.

Entertainment was available through the in flight GoGO App. I didn’t bother watching during the flight since it’s not much fun watching on a small iPhone screen.

Waiting for us on the seat was a 250ml bottle of Dasani Water and a thin pillow.

Delta Airlines offered us an open bar pre-departure beverage in a plastic cup. I went with a gin and tonic. I have to say that this is an excellent feature and I could really get used to this!

Our pilot announced a short flight time of one hour and twenty minutes today to the Delta Airlines hub of Minneapolis St Paul.

As we got underway, I did some plane spotting on our taxi out to the runway. I was able to make out a star of “The Apprentice” reality television show parked on the apron at La Guardia. That’s a T, a big “T” (laughing) on the rear vertical stabilizer.

We had a steep climb leaving La Guardia today with a hard right run as we departed. I was seated on the left side of the aircraft. Our flight track took us over Manhattan just north of the Central Park. This was the airport that Captain Joe Sullenberger struck a flight of birds when he had to ditch his US Airways Airbus 320 by landing on the Hudson. As we went over enjoying the views, I was also plane spotting the Teteborough Airport which seemed incredibly close across the Hudson and was re-constructing the whole incident, from a Clint Eastwood movie goer’s perspective anyway. It was indeed a very scenic view departing La Guardia New York.

The Meal: A Snack Basket

Despite the flight showing as having “meal services” on our purchased ticket itinerary, it was a snack basket only today of popcorn, pita chips, pretzels, Kit Kat chocolate bars and granola bars. This was unlike our trip out on Delta Airlines First Class Minneapolis St Paul – La Guardia New York (the same segment) where we had a full meal. I suspect that this was because this flight was not specifically covering a meal period as we were travelling between the early and late afternoon.

Since it was only a snack, I ended up with two rounds of popcorn chips since we didn’t really stop for lunch prior to departing and The W Union Square Continental Breakfast was wearing off. I paired the snack with white chardonnay wine.

It wasn’t super satisfying as this “meal services” snack wasn’t filling. Further, it was worsened by the fact that the lounge didn’t offer that much food making travellers twice as hungry.

We had a cold approach into Minneapolis St Paul with some pretty winter views. The weather looked absolutely freezing outside and it was confirmed to be –15 Celsius on the ground when we landed.

We touched down at landed at Gate C3 at Minneapolis St Paul. We were completely surrounded by old man winter.

My Thoughts on the Delta Airlines Regional Experience:

Our Delta Airlines flight was a nice but short flight. The high point was the ease and convenience of La Guardia and it’s proximity to Manhattan. However, I can’t get used to the no food part to these flights; even if they are short hops. This isn’t helped by a lack of food in the lounge, making it a little more challenging than necessary to get food when you’re in the Delta Airlines chain system. I’d recommend arriving with a full tummy because I ended up hungrier than I would have liked.

If you flown on Delta Airlines’ regional flights, was the food offering enough for your liking ?