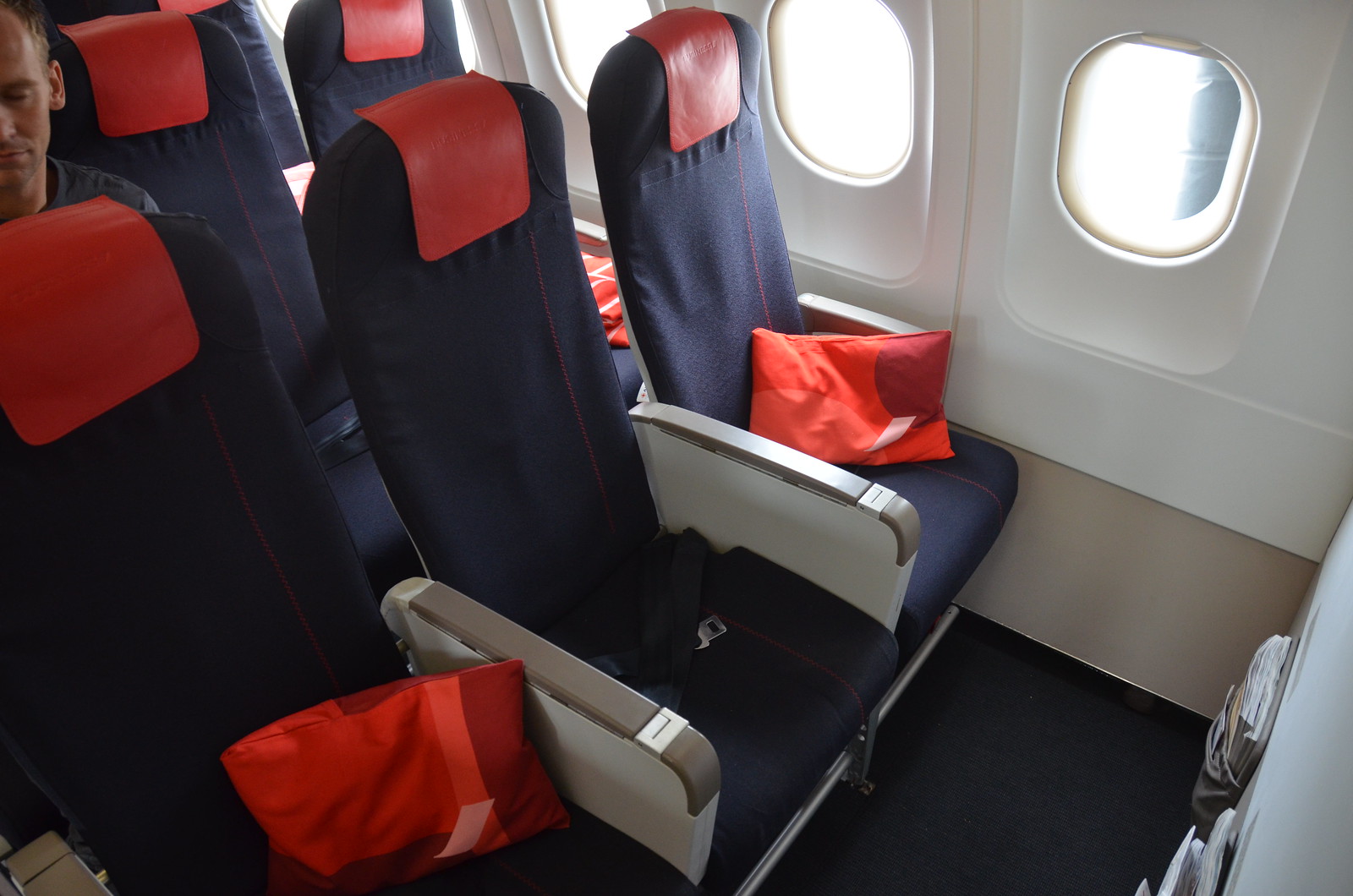 Leaving the Air France Salon Business Paris Terminal 2F lounge, we headed back up to the concourse. There wasn’t a lot of spare room, based on the way that had designed this finger of the airport. We jammed into the Sky Priority Boarding area. The gate area here was so stuffed full that we pretty much had to line cut to get into our zone. There were lots of Shengen flights leaving at this hour and the place didn’t seem to be designed with a lot of spare space in mind.

Our flight boarding was fully automated today and completed by scanning the boarding card into the gate system and a walk down the glass jet bridges. The carry on police was not around today and MrsWT73 waswere able to sneak on a few extras.

On Board Air France Business Class:

Our flight today would have us on the unusual Airbus 318 model. It’s the smallest and least produced Airbus model in the three hundred series of their aircraft family. They are configured in 107 to 132 seat varieties and there have only been 80 sold worldwide with none currently on the order book. Air France and Tarom are the only commercial carriers to currently operate this type of aircraft.

I’d give a definite thumbs up to an attractive cabin colour, with striking cushions that accented well. However, it’s a bit of a thumbs down for the less than inspiring bulkhead wall, that has no decoration of inspiration on it. As with most other European cabins, there was no entertainment or television monitors on the bulkhead wall. There was a bassinet holder that was available as well.

There was no pre – departure beverage offered today as the rest of the cabin streamed by for the economy boarding.

As we were getting ready to leave, we had a 15 minute flight delay to remove 9 suitcases. How anyone gets nine suitcases on a flight without turning up is a mystery to me. . .

We had a quick departure past the strange “no right turn” sign on the taxi way, with a nice view of the Air France Concorde on the climb out.

The Meal: A Light Meal

Once we were at altitude, a reasonable snack plate followed by a bar and beverage service. The snack was plated all at once, accompanied with a printed menu.

Strangely, there was no white wine available on the business class cart, but a bottle of sparkling brut was available, so I had a little of that followed by a coffee to deal with the jet lag.

We had bumpy ride down and a quick taxi to our gate at Munich. We collected our checked bag at the belt in Terminal 1 and waited for what seemed like forever (probably about 15 minutes).

My Thoughts on the Air France Short Hop Experience:

All in all, it was an okay short hop flight. I can’t see what the advantage of using Air France would be for a short haul intra European flight when so many other competitors offer likely better service (Lufthansa) and connection experience (Munich / Zurich / Austria). The CDG airport is pretty old with crowded boarding areas and the food and beverage (by short haul standards) is pretty much the same as everyone else. Keeping with the theme of the earlier Air France flight, it was a decidedly “average” experience.

If you’ve flown Air France, did you have a better seat, food, or service experience ?