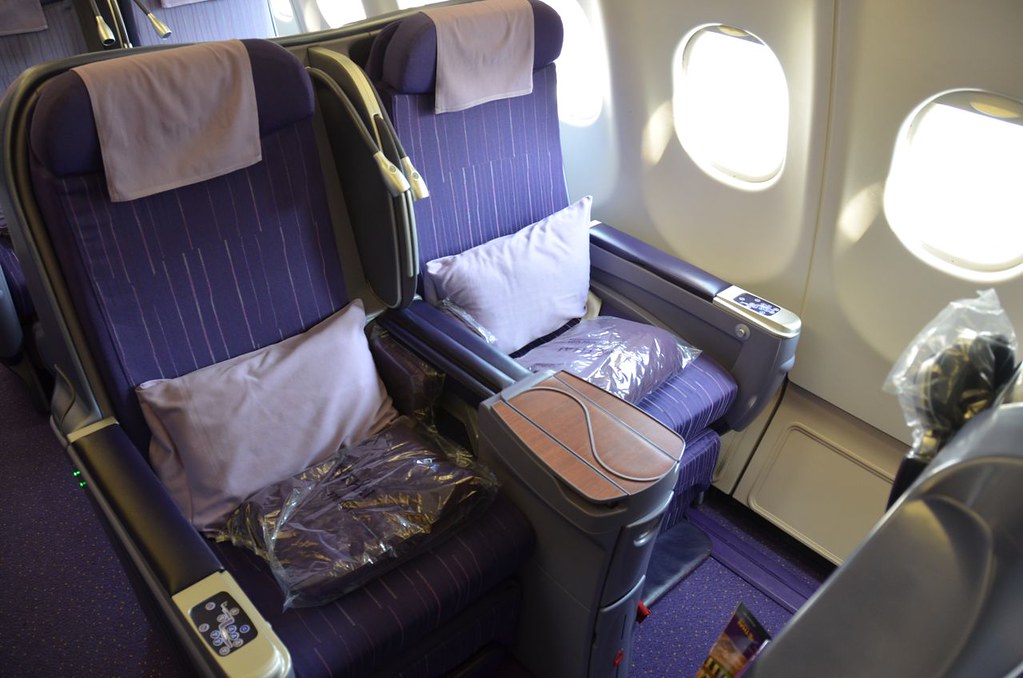 Thai Airways is one of the more unique carriers to grace the Star Alliance network. It generally has great reward seat availability, a unique in service product that involves elaborate costume changes on the part of it’s flight attendants, and world class transfer services at Bangkok Survharnabhumi airport that include massages for all Business Class and First Class travelers. This flight certainly set the mood for our inbound flight connecting through Bangkok on our way to the United Arab Emirates.

This post is one chapter on our second Round the World trip via Japan, the United Arab Emirates, Oman, and Poland. This trip was redeemed through Air Canada’s Aeroplan and through Starwood Preferred Guest (Marriott Bonvoy) loyalty programs. For more information on how this trip was booked, please see our trip introduction here. For other parts of the trip, please see this index.

“Thai Airways offers one of the most unique flying experiences by offering traditional Thai Hospitality, Thai oriented cuisine on board and the most purple themed aircraft around“

After a short wait, boarding started from Gate D1A. There was another big line crush when the initial boarding call was announced. Thai ground staff actively enforced the boarding priority, which was good on them since it’s much easier for gate staff to “forget”.

We hopped the bus as one big group out to our Airbus 330 that was parked at a close by remote stand. Double door boarding was used with stairs at the front and rear of the aircraft from the apron. It’s never fun to have a bus gate and Bangkok, even with all its gates, seems to have to use them sometimes.

The seating configuration of the Airbus 330 was almost identical to that of the Royal Silk product on the Boeing 777 that we had flown in on Thai Airways Seoul – Bangkok. The configuration in business was 2-2-2.

The seating configuration is pleasant for relaxing and the seats had ample room between themselves and the passengers in the rows in front and behind you.

The entertainment system was controlled by a wired remote control. The seat back featured the same adjustments as on the Boeing 777-200 configuration. The angle flat seat was great for relaxing but not so comfortable for sleeping.

Thai Royal Silk Business was a full cabin today with a blend of people typically associated with flying to and from the Middle East. This meant customers of all races, shapes and sizes. It was a contrast from the homogeneous Asian countries we had just visited. Our seats, 12 K/ 12H, were surrounded by a family of eight Asians traveling with two children. One of the children, aged about 9, took a special interest in us and actually invaded our seating area on two occasions, having to be physically pried back by the nanny and grandparents. These incidents prompted masses of attention as they tried to sort things out and occurred mid sleeps or during meal services.

Today’s service started with Piper Heindsek champagne and cashews. Thai was actually opening the expensive stuff on the ground in Thailand (as opposed to a cheaper sparkling wine) as evidenced by the actual PH champagne bottle that was brought around on the refill while we were parked at the remote stand waiting for boarding to finish.

It was so good, I actually had a second one.

The Amenity Kits: by Porsche Design

Time to Take Off:

The Menus were dropped off just prior to the taxi. The wine list was the same as from our Incheon – Bangkok flight.

The drink list was also presented. It featured wines exclusively from France: two whites, two reds and one Champagne. It was exactly the same wine list from our earlier Incheon – Bangkok flight.

There was some terrific plane spotting as we taxied and climbed out of Survarnabhumi today. We also had some great views over Bangkok and the winding Chao Prayha river, in addition to the Scirroco Sky Bar in the Lebua hotel made famous in the Hollywood movie “Hangover 2”.

A pre-dinner drink was offered today, as served off the cart. I decided to mix it up and went for a Gin and Tonic this time. The Thai Airways flight attendants were displaying their beautiful in flight dress that Thai flight crew wear while flying. Regular Thai fliers will be aware that the flight crew change outfits once on board and have an in flight outfit, and a ground outfit.

Today’s crew seemed to struggle with keeping up with the full passenger load in business. The dinner service was a bit rushed and there wasn’t much sticking around for pleasant conversation. The appetizer nuts would come out but drinks wouldn’t turn up until 15 minutes later. These aren’t bad things, but rather the crew seemed to be a bit stressed about the execution. Despite this, the crew managed to bring the bread basket around twice.

Today’s main was a New Zealand Lamb Cutlet with a tarragon tomato concaisse, roasted potatoes with rosemary and roasted vegetables on the side.

The meal concluded with another gluttonous double dessert of a fruit and cheese plate and a serving of walnut cheese cake.

After the dinner, we settled into the seat and tried to relax. First world problems here: but aside from the old-fashioned business class barca-lounger seats, these are the worst business class seats ever for long haul travel. After 11 total hours in the angle flat seats between the two flights, I have to conclude that the Thai configuration really isn’t super comfortable for long haul flights; especially where sleeping is involved.

They don’t lie flat or any further than 138 degrees (Seat Guru statistics) or recline, which results in the dreaded slide down the seat as time passes. As a taller person, I also find the seats a little tight. On my particular seat, the foot rest flap was also broken on the lower seat rest with one side detached- hanging off the seat lopsided. This wouldn’t be a key issue, but the flap is integral as it was supposed to prevent you from sliding down the slope on the business class seat.

MrsWT73 didn’t find the seat very ergonomic either. When I asked what she thought of Thai Royal Silk compared with our last experience on Thai Royal First, she commented “It’s by no means horrible, and those dinky little wine glasses. Every drink is a shot”. Top it off with lots of galley noise as well on this particular segment and it make us look forward to getting off the plane and into Dubai.

I settled into the Thai Video on Demand, which had a large selection of movies of all kinds.

About ninety minutes before landing, we were offered a second service. The service was typical Thai Airways snacks – sandwiches in a cafeteria style with cello wrap. I opted for juice to go along with this.

Throughout this last flight, we had 60 km/h headwinds that added an hour to the flight. We had a quick landing and a short taxi to the terminal at Dubai.

On arrival in Dubai, we disembarked and walked through a very narrow arrivals hall on an elevated concourse. The design must have been a bit older, as it was clearly not designed to handle wide body jets. There was lots of congestion with crowding with slow walking families walking 5 abreast with kids.

We eventually made it down the escalators and over under the aprons to the older Dubai Terminal along the underground moving walkway. There was a long 25 minute wait for immigration to get stamped in. Sadly, there were no fast track services available tonight. We eventually hopped a quick and efficient taxi to the Grosvenor house for 92 AED, ending our 16 hour travel day.

Overall, there was not much difference between the two Thai Airways flights. Thai Airways plays well in Star Alliance by offering great reward availability, and a pleasant transfer experience at the older Survarnabhumi Bangkok airport. Unfortunately, their soft product service seems to vary greatly and their hard product is starting to get really dated in comparison to the flat beds that other carriers are offering. The amenity kit doesn’t make up for these deficiencies. One could argue that the Royal Orchid Spa, depending on your mood, either does or does not make up for the product in flight. I guess it depends on what you value in your travel and whether the travel is fully paid or a reward ticket.

Wishing for a good dose of Aloha right now.
Remembering the walks on the lava beaches of Kona, Hawaii, 🇺🇸
The tiny and funky first class cabin on Hawaiian airlines Boeing 717. Easily a first choice when you have to fly between islands…
Dreaming of this!
Celebrating the end of the UA Island Hopper circuit at Bills Hawaii- an excellent choice in Waikiki
Unfortunately, no United Business Class on the way back from this particular UA Island Hopper trip... but I did score a UA Silver upgrade to the bulkhead GUM ➡️ HNL. Small miracles after 14 hrs in economy the day before...
A one stop wonder, one sunset night at the Sheraton Guam 🇬🇺
Remembering a brief stop at the Sheraton Guam 🇬🇺 There were giant whales lurking in the building for New Years.
Advertisements