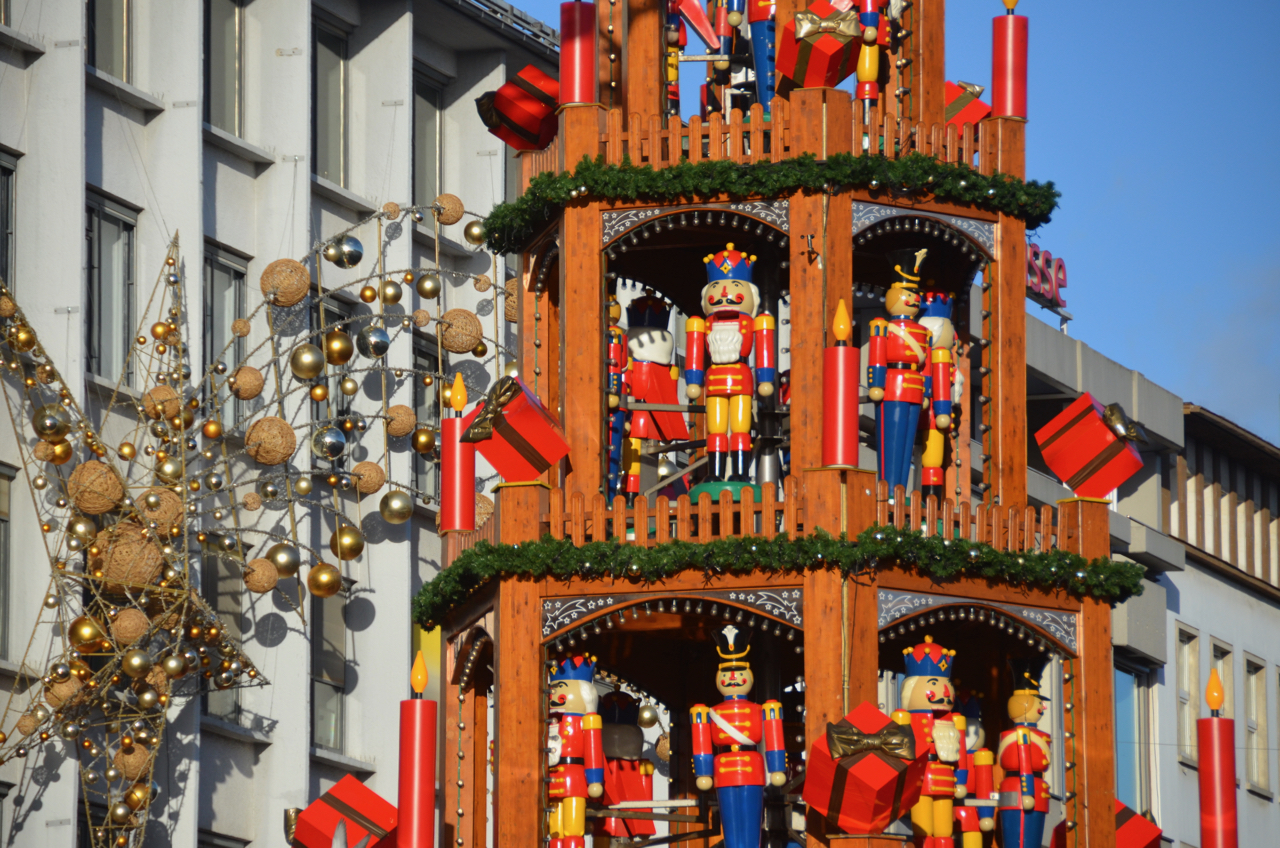 The first night we arrived, we walked up the street from the Novotel and left at the “T” about 5-7 minutes to Beckers Hannover wine bar. It was a quiet place on the street. There were no English menus so we set out with google translate to decipher the menu.

We ended up having Weiner Schnitzel which was a terrific way to spend an evening. All in it was super tasty and a nice way to arrive instead of the usual hotel restaurants that lack any We walked back to the hotel in the rain.

The next morning MrsWT73 went off to her meetings, and I had a leisurely start. The rain blew away so we had some sun. I ended up spending the day on an 18,000 step walking odyssey through Hanover.

I left the hotel and started walking towards town. I started at Listenplatz. I came across my first local Christmas market, which was just getting going for the day. It seems that the Christmas markets are everywhere throughout Germany, and that each neighborhood of importance has one. The Listerplatz market seemed to be the gathrering spot for this particular community and the area was getting filled with kids visiting the market in the morning.

As I wandered north, I passed by some lovely gardens that were very reminiscent of Amsterdam with its grand buildings.

Then over under the Raschenplatzhocstr flyerover, towards the Hautbahnhof train station. It was an interesting piece of seventies architecture and I couldn’t resist taking a view contrasting photographs.

I continued onwards down Kamarschstr through the main shopping district. I found a giant two story Gluewein pop up bar complete with spinning nutcrackers in the middle of the intersection at Kropcke; the city’s biggest underground metro train intersection.

I worked my way further south towards the Altus Rathus church. There were pretty much Christmas market vendors all the way south to and right around the church. This made for a pleasant walk with lots to look at.

A peace bell from Hiroshima sits inside as donated by the sister city of Hiroshima. It’s reported that every year on August 6, the day that the atomic detonation occurred in Japan, a delegation from Japan visits to ring the Hannover church bell.

The church is complete with a somber atomic bomb imagery on the floor by the bell.

I contined on towards the Neues Rathaus building. The sun was starting to set at around 3PM at this time so I was able to see it in both in part sunshine and shadows. It’s a majestic building that appears to sit on a man made lake.

I went down as far as the Courtyard by Marriott on the Maschsee for a little hotel chain reconnaissance for future stays. The Courtyard didn’t look super appealing in the winter, aside from it’s great location on the lake (likely terrific for summer); it looked downright sad in the winter months and was located quite a ways from absolutely everything except a stadium.

I returned back to down by the Altus Rathus church and the Christmas market surrounding it. The market was looking a little more magical with the lights coming on as the sun slipped away for the day.

I was getting a little hungry by this point so I stopped at one of the food stalls for some potatoes. The potatoes were being cooked on site fresh so I ate them as soon as they were ready. There were lots of variety at this point but I ended up with some with sour cream. Nothing like a nice light German snack! Simply devine!

I walked back up to the main train station (Kropke) where I took the U train back to the hotel. It was enjoyable to take in the sights under full color. Needless to say, an exhausting day!!