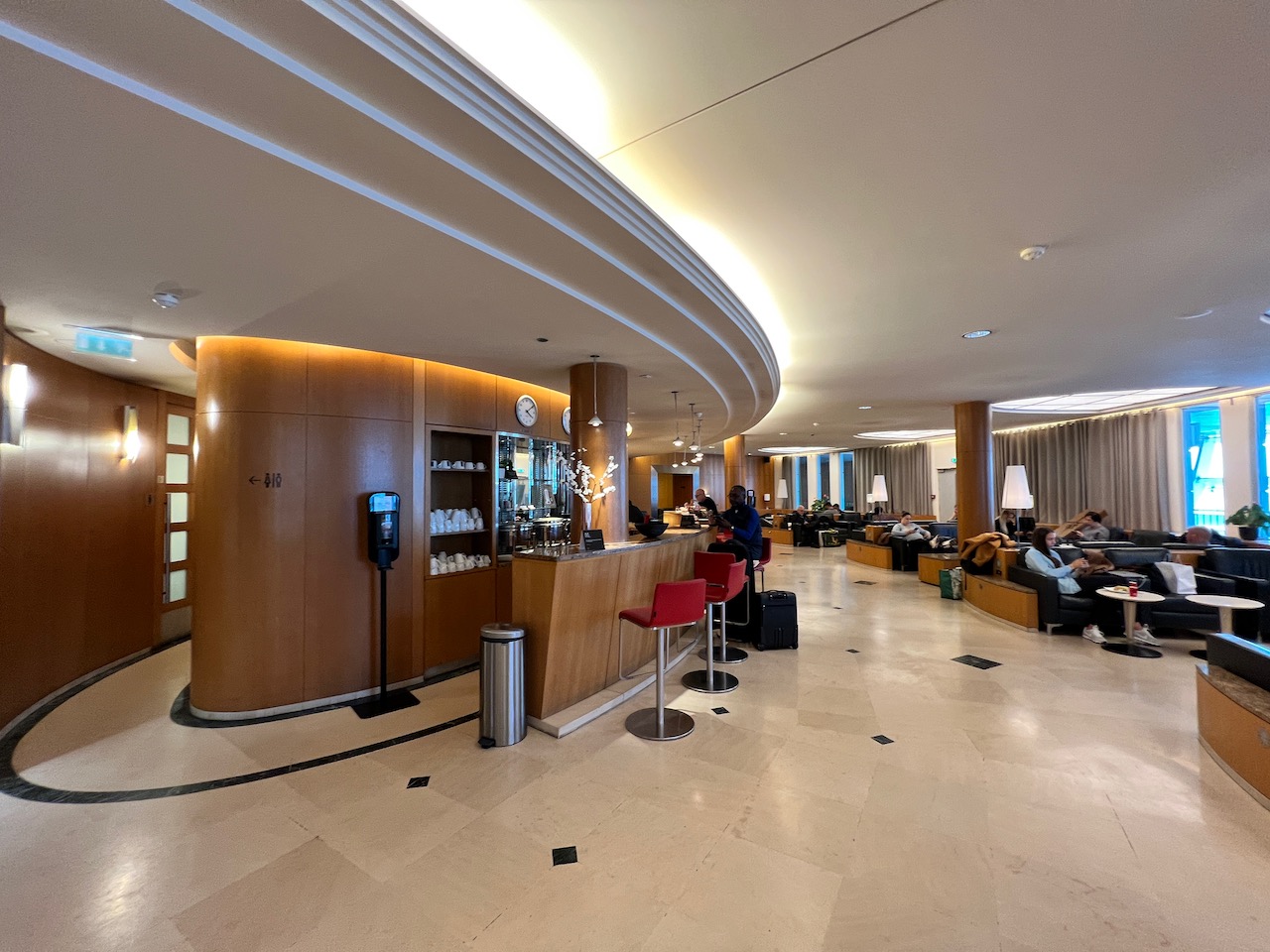 This post is one chapter on our trip to Jordan, Israel and France during the end of the pandemic. This trip was enhanced through Marriott Bonvoy Elite Status, Hertz Gold Plus Rewards and Alaska Mileage Plan. For more information on how this trip was booked, please see our trip introduction here. For other parts of the trip, please see this index.

✈️ Read more from this trip:

Having checked in earlier with Turkish Airlines in Paris Charles de Gaulle – Terminal 2A, we found ourselves on the secure side. While I left MrsWT73 in the contracted Salon Paul Maxence Business Lounge Paris that was located in the space between Terminal 2A and 2C, I left her in order to investigate the Air Canada Maple Leaf Lounge Paris – Terminal 2A.

I started out from the duty free retail space located at the shared departure hall between the two flowing Terminals in between Paris Charles de Gaulle Terminals 2A and 2C. The two departure halls are inter connected, and there is no obvious moment when you pass from one terminal to another. Both Terminal 2A and 2C share the same central departures facilities, so you’ll pass through the same exit procedures in order to access the departures concourse.

Walking along the length of the concourse, I headed down towards the Air Canada Maple Leaf Lounge – Paris. The concourses at the Paris Charles de Gaulle meander along in a gentle and gradual inward curve. There are no moving sidewalks or other organizing features, so fellow travellers seem to be scattered about the concourse.

Eventually, I passed by Gate A40, and headed into one of the separate outer terminal buildings through a glass enclosure pathway.

I eventually arrived to the outer round gate concourse of Paris Charles de Gaulle – Terminal 2A exclusively for gates A37, A38 and A39. The Air Canada Maple Leaf Lounge was located in this remote outer terminal at the bottom of the central escalator.

The Air Canada Maple Leaf Lounge was placed in an interesting spot, as during my visit, the Air Canada flights were actually leaving from the main concourse that I had already passed on my walk out. Air Canada travellers would have to walk 7 – 10 minutes out to the lounge, only to double back to their gate that they’d have passed on the way out.

The lower escalator entry isn’t super glamorous, but it was functional. The Air Canada Maple Leaf Lounge was well marked as a Star Alliance Gold Lounge.

The Air Canada Maple Leaf Lounge Paris is accessible through a number of ways:

The most likely way to get access to the lounge is through a confirmed business class ticket on a departing Air Canada international flight.

If you are travelling in Air Canada Premium Economy or Economy Class, Air Canada may offer you the option to purchase an international “one time pass” at the point of ticket purchase on http://www.aircanada.com, so that is another possible way that you could gain access.

Our access today was provided courtesy of our Turkish Airlines Business Class Paris – Istanbul flight as a result of travelling in business class.

Inside the Air Canada Maple Leaf Lounge Paris Terminal 2A:

The Air Canada Maple Leaf Lounge Paris has been operating at this location since at least 2006. I used to pass through France and this terminal regularly when I went to business school in Grenoble, France.

After reception, the lounge is divided on either side of the reception. In general, the lounge has a basement like space being below the main departure Terminal 2A Annex concourse. This results in a darker lounge thanks to standard height ceilings and limited views that look into aircraft apron equipment.

Immediately to my right after entering the lounge, there was an immediate smaller lounge room consisting of chair loungers packed against the walls.

Continuing on, there was a small coffee station and food service hallway. The hallway led to back office study carrels over red carpet. The work station area at the back of the lounge was quite dark, since it had no windows, and I wouldn’t find myself sitting back here unless I had some urgent work to complete prior to getting on a flight.

Heading back to the main reception, on the left hand side of reception, were most of the features of the lounge. Crossing to the other side of the lounge opposite reception, I found myself in an immediate bar and food service area. The lounge continued with seating around the outer glass, with lounge chairs that were arranged in traditional four person configuration.

Following the curve of the round departure gate building, the lounge wrapped around the curve. The curve of the building meant that the lounge itself wasn’t super spacious, as they had limited physical space available to work with in the smaller CDG Terminal 2A Annex.

The pathway eventually to the back of the lounge, where an additional small hold lounge seating room was located. This room was quite dark. Like the study area, it didn’t feature available light. This led to a bit of a dark feel for this space.

To summarize, the lounge seating was comfortable but a bit cramped. As a result of the basement location of this particular lounge, and the lack of window seating, it often meant that you were seated close to and near other travellers.

The decor of the lounge was pretty old, and it certainly didn’t measure up to many of the newer, or renovated, Air Canada Maple Leaf Lounges around the world. I suspect we will see this lounge change over sometime in the near future, as it doesn’t appear that Air Canada has spent much time into modernizing the wood paneling to match the look and feel of all their other lounges.

The Air Canada Maple Leaf Lounge Paris offered a range of food and snacks. Unlike many international lounges, there didn’t appear to be a formal food zone designated in the footprint and layout of this circular space. Rather, the food was clustered together on the left hand side of the lounge seating in various corners and carts. This led to a little bit of a less glamorous presentation and a bit of cris – crossing across the floor to see what was available on offer.

Against the concourse walls opposite the windows, and immediately adjacent to the bar, there was a charcuterie tray and food plate station.

The desserts and meets and cheese were located on the same serving area. The charcuterie actually looked pretty appealing and fresh, a bit of a change from many lounges that often have stale looking meats and cheeses.

On the opposite side of the lounge, there were baked goods and other goodies available. Regrettably, the presentation of the desert cart wasn’t as appealing as the charcuterie plate.

The food and beverage offering in the Air Canada Maple Leaf Lounge was enough to enjoy as a snack. However, it wouldn’t substitute in any way for a full meal. I would recommend arriving to the lounge in a fuller state, if at all possible.

I enjoyed the lounge prior to a very long fifteen minute walk back to Paris Charles de Gaulle – Terminal 2C in order to head off on a Turkish Airlines Business Class Paris – Istanbul flight.

My Thoughts on the Air Canada Maple Leaf Lounge Paris:

The Air Canada Maple Leaf Lounge Paris – Terminal 2A was a slightly out of the way lounge that had a dated decor. While the location was inconvenient, it did offer a place to get a snack, and a place to recharge away from the busy halls of Terminal 2A. The lounge itself isn’t a place that I would rush to get back to. Given it’s remote location, I probably wouldn’t bother coming out if I was pressed for time.

If you’ve visited the Air Canada Maple Leaf Lounge Paris – Terminal 2A, did you find the trek out worth your effort ?