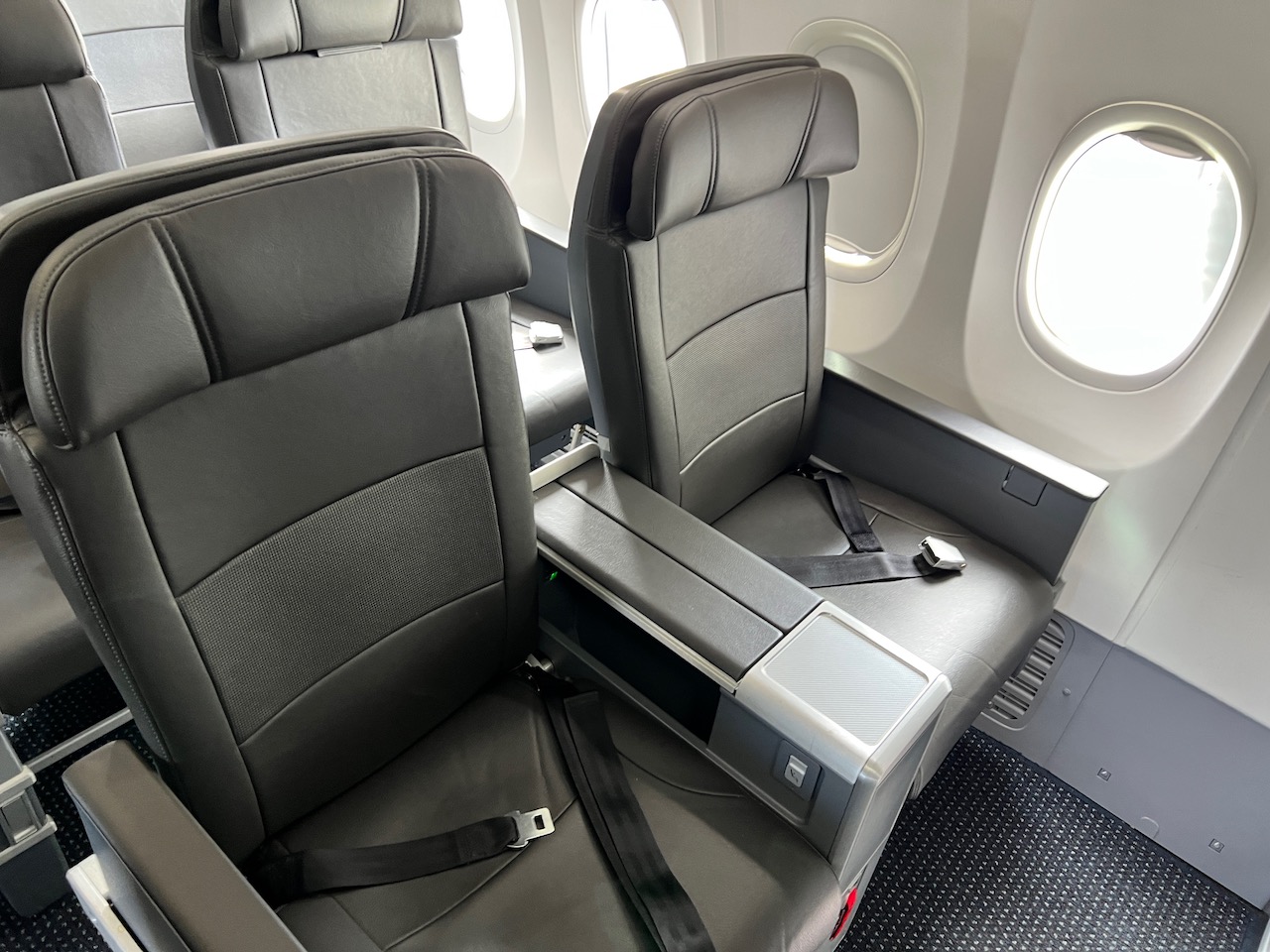 American Airlines feeds traffic from Vancouver into its American Airlines hub at Dallas Fort Worth, allowing connections throughout the United States and Internationally onto British Airways and Qantas. Our experience with American Airlines Business Class today would have us testing out their new next generation seat on their Boeing 737 series aircraft, along with their improved catering. How would the experience measure up?

This post is one chapter on our trip during the pandemic to Curaçao in the Southern Caribbean. This trip was enhanced through Marriott Bonvoy Elite Status and Hertz Gold Plus Rewards. For more information on how this trip was booked, please see our trip introduction here. For other parts of the trip, please see this index.

Our flight process started the day before with an Antigen Test courtesy of Switch Health through a tele-health mechanism. At the time of our travels, there was a Center for Disease Control requirement that all air travellers into the United States had to take an antigen rapid test with a negative result, no more than one day before travel.

We then proceeded through American Airlines check in processes the afternoon before through the new partnership with the Veri-Fly App. On receiving the check in notice, we were encouraged to review all travel requirements and upload vaccine certificates, proof of vaccination for international visitors to the United States and complete Curaçao Landing Cards and Passenger Location Forms. There was a lot of additional work and it took about three hours for us to complete the testing processes, along with me navigating through all the proof of vaccinations and relevant uploads. I was still unable to complete the online check in with American Airlines and had to present myself to an AAgent “approximately three hours before your international fight”.

We drove from the house today and parked the Land Rover in Vancouver Long Term Economy Lot Parking. It was one of the only parking lots open at the time of our travels.

We hopped the free Skytrain over to the US Transborders Departures area. It was a quiet check in today without any line in the Priority Check In area. We were promptly attended to by a junior but enthusiastic check in staff ground attendant.

We had our vaccination cards and negative rapid test results verified. We were also able to get our bags short checked to Dallas Fort Worth to mitigate leaving the bags in the secure area overnight during our connection prior to our American Airlines First Class Dallas – Miami and American Airlines Business Class Miami – Curaçao flights that we would be continuing on during the next day.

We wandered through minimal security using Global Entry / Nexus “front of the line” service. Thanks to our mid day flight times and the tail end of the pandemic two years in, there were still minimal delays at the CATSA security screening. Flights that depart Vancouver, like all other Canadian Cities, offer US Customs Pre-Clearance. This meant that you cleared US Customs in Vancouver and conveniently arrive to a domestic terminal on arrival in the United States of America.

There is no available lounge for American Airlines or One World Customers on the US Pre-Clearance Secure Side of the Vancouver International Airport. The usual Plaza Premium US Transborder Lounge Vancouver that is accessible via the American Express Platinum Card was shuttered as a result of planned expansion on todays’ visit. There was a construction permit sign outside indicating that the lounge would be expanding from 58 seats to a much needed 132 seats.

We wandered down to Gate E80 which was situated right at the end of the departures hall. Boarding started promptly at 12:45 PM with Concierge Key, followed by Group 1 and Military all at the same time. We boarded with Group 1.

On Board American Airlines Business Class:

American Airlines Business Class on the Boeing 737-800 is set up in a 2 – 2 configuration with 4 rows of business class. This is also known as American Airlines First Class if you’re flying this equipment type on a domestic United States flight.

Our seats today were in Row 3 A and 3 C. There was lots of leg room in the slim line seats. The seats themselves have a modern contemporary look being a pleasant grey color. Settling into our seats, there was also plenty of room in the overhead compartments for rolling suitcases.

The seat back did not feature a monitor. Instead, the seat featured a tablet / phone holder that allowed for storage.

The seats offered a reasonable amount of leg room for a four hour flight.

The seat recline feature was through a simple lever located within the centre console.

There was a holder for laptops and other devices in the center console between the seats. There was also in seat power at this location.

The table at our seat also comfortable held a 13 inch MacBook Pro computer, with a little extra room on the side to work.

The seat itself also featured individual air nozzles in the overhead area. I personally really enjoy having the overhead air nozzles as it allows for a bit more comfort when travelling when you can select and adjust your air flow.

Our pre-departure services started with an offer of a sterile wipe. This has been pretty customary during these pandemic times and is more of a pleasant gesture rather than something that I fund myself actually using.

While were were waiting to get underway, the lunch and pre-lunch drink orders were taken on the ground. Today’s choices were beef in a mushroom sauce with farrafelle pasta or risotto with butter nut squash.

The pre-departure beverage was surprisingly absent and likely another victim of pandemic cost cutting.

We had a bit of a delayed push back today from the gate with wheels up from Vancouver at 1:40 PM, or approximately 25 minutes after scheduled take off time.

We had a departure on Runway 26L meaning we had an overwater view of the Georgia Straight followed by a left turn back to the United States.

As we climbed to altitude, we had a towel service. It was a nice touch and something we don’t ever get on our short haul trans-border flights with Alaska Airlines. The tower was a bit nuked by the microwave and it wasn’t a very opulent or elegant towel.

The drink menu for both economy and business class / first class was printed on menu cards. It didn’t feature too many aspirational products and there as no wine listing that we occasionally see on our Alaska Airlines flights.

After arriving to cruising altitude the pre-lunch drinks were served. Today’s Gin and Tonic was Aviation American Gin served with Canada Dry Tonic Water and warmed nuts. We had apologies for the low rent plastic cup for the mixed nuts as they forgot to load the proper serve ware.

Lunch was served. The lunch was the beef with mushroom sauce over farafelle pasta. The main was served with a mini charcuterie tray of artichoke hearts, European salami, feta cheese and hard cheddar. There was also a choice of warmed ciabatta or French Bread, along with a green salad with feta, cucumber, red onion and Kalamata olives.

MrsWT73 had the vegetarian risotto with butternut squash.

There were frequent drink refills from a pleasant staff.

The food itself was tasty and flavourful. Even the jade MrsWT73 was impressed with the food product having regularly travelled this route for the past ten years on her work circuit.

Overall, the catering on American Airlines has improved substantially. If this is the new American, United Airlines’s food and beverage department has something substantial to worry about.

After the lunch, I took a look at the entertainment system. The design of the next generation seats on the American Airlines Boeing 737-8 offers a great device holder in the seat in front.

While there were no i-Pad’s passed out like Alaska Airlines, I was able to access the entertainment through the American Airlines in flight wifi and app.

Arriving into Dallas Fort Worth:

After our flight, we descended into Dallas Fort Worth in the state of Texas, United States of America. The landscape in Dallas is so different than from my home in the Pacific Northwest and it’s a startling contrast every time I arrive.

We arriving into the Dallas Fort Worth International Airport and parked next to an American Airlines Boeing 737 as the sun was setting.

We de-planed and found our way over to the Dallas Fort Worth Airport Marriott for our layover before continuing on with American Airlines First Class Dallas – Miami and American Airlines Business Class Miami – Curaçao.

What stood out for me most of all on this American Airlines Transborder flight between Vancouver – Dallas Fort Worth was the improved catering and food. The food was much better than expected and we also received some amenities like a towel service that you’d expect on a longer flight. The seat itself was reasonably comfortable and a much more modern and functional version of what Alaska Airlines and Air Canada offer on the same transborder routes.

If you travel between American Airlines and Alaska Airlines, which one do you prefer ?