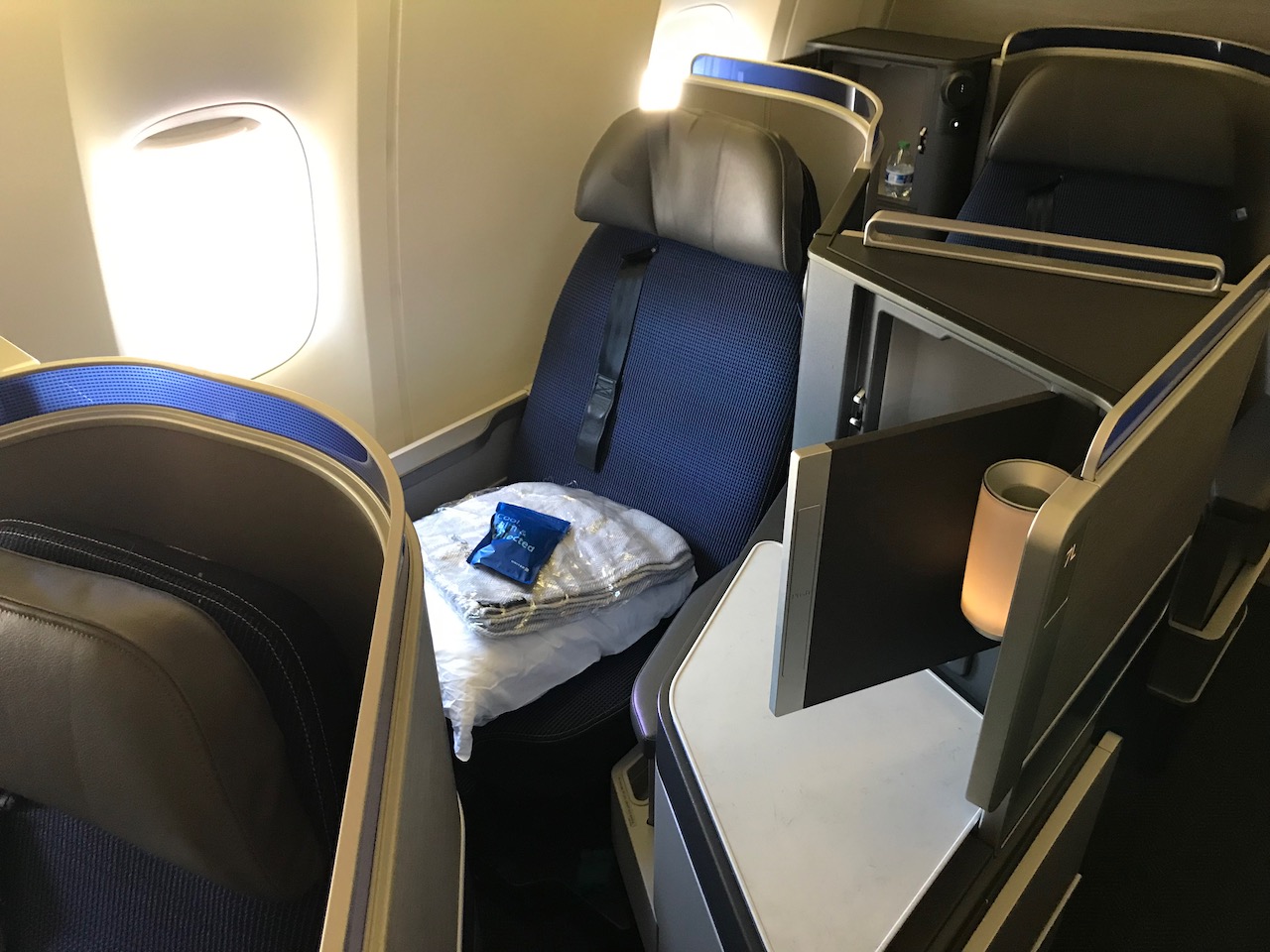 An overnight flight back from Hawaii often requires scrunching yourself up in an uncomfortable seat until the morning flight. We were lucky to have found a deeply discounted business class fare that would allow us to return to the mainland in a fully flat bed. Our experience in a United Airlines Polaris Business Class Seat would have us travelling back home in style.

When boarding got underway, we had the pleasure of double jet bridge boarding today. We climbed on board and I settled into 3L.

United Airlines Polaris Business Class offers a 1 – 2 – 1 configuration in a full flat seat with every seat having direct aisle access. The United Polaris blue colouring is still pretty pleasing to the eye. The cabin is also private since the seats have high walls that prevent you from seeing into other cabins, unless you happen to be standing over top of them.

While seated in the seat, you’ve got access to a wide range of power. The power options include USB charging, North American and European power plugs. There is also a wired remote nearby for controlling the entertainment system.

Immediately next to the seat is a small space suitable for temporary storage of laptops or other items while travelling. There is also a small reading light over the shoulder.

While seated in the seat, there is a large television monitor for entertainment purposes. Underneath the monitor was a small spot for smart phones and perhaps a wallet.

A footstool was also located underneath the screen console. The console also offered USB connectivity with a mild charging function.

The seat functions were controlled through a thin sleeve of controls loaded on the side of the suite.

The crew passed through the cabin to collect the plastic wraps of the blankets.

A simple amenity kit was provided to travellers. It was provided in a zip loc styled plastic bag in quite a low rent touch. The kit contained ear plugs, an eye shade and and some Colgate toothpaste.

While the amenity kit wasn’t all to aspirational, it fell into the category of better than nothing.

Before we got underway, we had a public address from the Captain. The Captain announced a flight time of 4 hrs and 41 minutes from Honolulu to San Francisco.

I attempted to listen to the awesome Channel Nine which allows you to eavesdrop on the air traffic control tower to plane conversations but they didn’t have it activated.

As we taxied out to the coral runway, we passed several US Air Force F35 sitting under bright canopy lights at Pearl Harbour Hickam Air Force Base. It was pretty cool to see $78 million dollar sitting around waiting to go.

As we underwent a taxi, the in flight safety video played. The United Airlines in flight video featured safety features set across a variety of scenes, including golf courses.

After the inflight video concluded, I played around with the in flight entertainment system. The United Airlines Polaris Business class offers a wide variety of movies, televisions and other things to watch. There were more than enough Hollywood movies to keep you entertained.

In addition to movies, there was also a flight screen which charted out the status of the flight.

We departed without any wait and got underway to San Francisco pretty quickly.

The Meal: Dinner Served all at Once.

After we arrived to a regular cruising altitude, the meal service started.

The choices for dinner were a Chicken Katsu with Steamed Rice and Brocolini or Pineapple Fried Rice. I went with the Chicken Katsu and a Bombay Sapphire Gin and Seagrams Tonic to go along with it.

The food was served promptly and presented all at once, which is always appreciated during a night time flight. They presented a double round of the drinks; which was a nice touch.

In addition to the main course, there was a Green Salad with Balsamic Dressing, along with mixed nuts and a warmed roll served along side it on the tray. For dessert, there was a wrapped regional Hawaiian Host Aloha Macs and a small Dasani water on the tray.

The Chicken Katsu was pretty tasty and the gravy was a nice touch. While I don’t expect much from a late night meal, this one was right on the money. It was filling without being too heavy, light with the rice and the broccolini was an upscale touch when broccoli is usually expected. The Hawaiian Host was a nice regional touch. Dinner was also cleared promptly, concluding the meal service.

After dinner service, I attempted two Relax and Sleep pills to make the most of the remaining 3 hours of flight time. I reclined the seat and attempted to rest.

The seat cavity was small for a side sleeper like myself. While the seat had a well designed foot / shoe compartment, the surface area is quite tiny for a large 6ft 2 inch person like myself.

As a side sleeper, I often found my knees bumping into the fuselage or the passageway wall that led to the aisle. The GE engines were louder than I remember; either that or I am older than I remember and as a result, it was harder for me to crash out and get any real sleep.

I also found that the Saks Fifth Avenue Blanket was quite linty and electrostatic-y. The pillow was quite comfortable but a bit soft for my tastes. Either way, it was an interesting way to remember Saks Fifth Avenue with lint spread all over your clothes.

I rested until the flight announcement that we were 20 minutes from landing at SFO. There was no second meal or snack service, unlike during our flight out.

We had an easy arrival into San Francisco International Airport. We killed off a four hour connection at the United Club Lounge San Francisco, prior to our United Airlines Business Class San Francisco – Vancouver flight.

After touching down at San Francisco, we navigated through the United Polaris cabin, getting off at door 2L

We were off before we knew it and into San Francisco terminal. We would later connect onwards to United Airlines Business Class San Fransisco – Vancouver for our final flight of the trip.

My Thoughts on United First Class (Polaris) from Hawaii to Mainland:

Overall, the United Airlines First Class (Polaris) is an excellent way to get too and from Hawaii. The ability to have a flat bed when most other carriers have a recliner seat is an advantage that is hard to pass up. Having access to plain but reasonable lounges throughout your journey is also an added bonus.  The large highlight was the food catering, which was better than expected.

If you travel between the mainland and the Hawaiian Islands, do you actively search out flight with fully flat seats ?