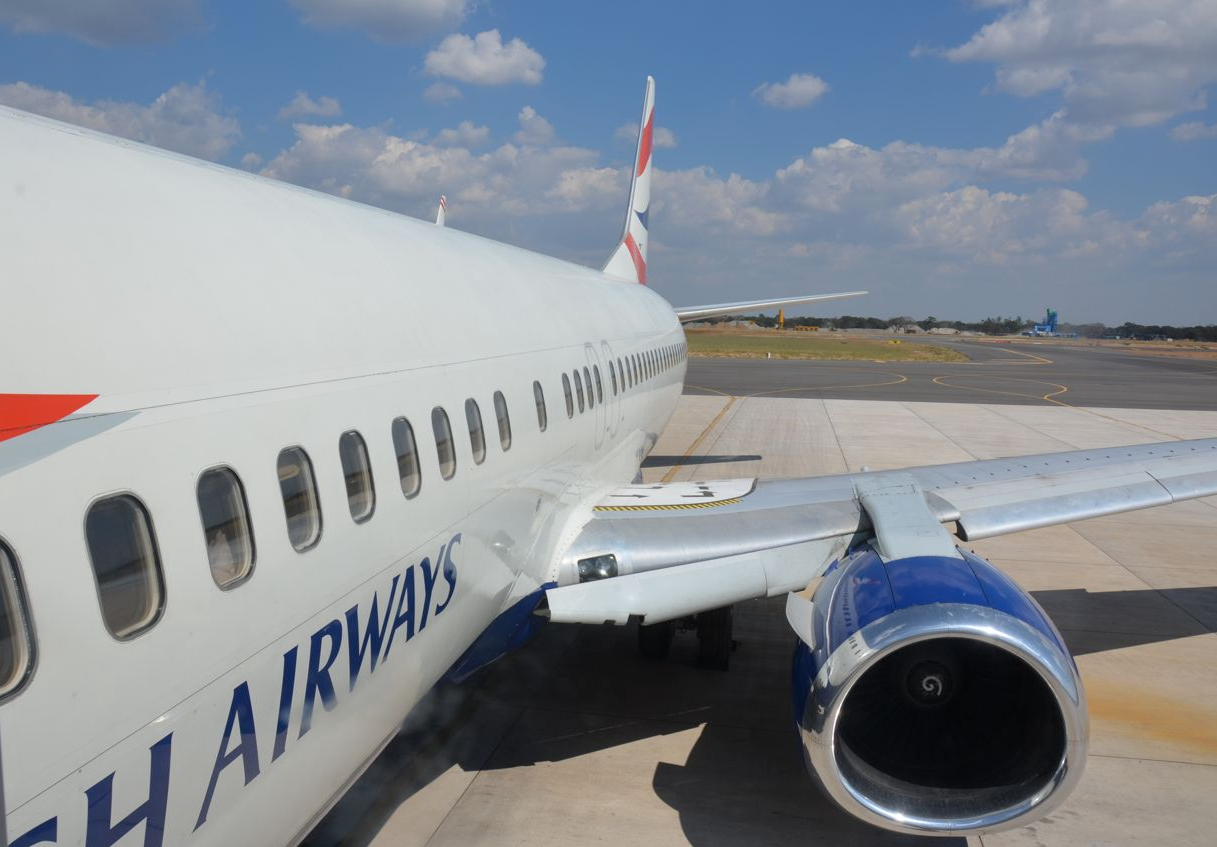 British Airways operates a franchise in Comair in South Africa. Flights with Comair allow people to gain access to reward points through the distance based British Airways Avios program. With this strategy in mind, we redeemed British Avios Airways rewards points for our international flight from Victoria Falls, Zimbabwe to Johannesburg, South Africa. Our Business Class experience was simple and a little bit easier than flying in economy.

This post is one chapter on our trip to South Africa, Namibia, Zimbabwe, Mauritius and the United Arab Emirates. This trip was redeemed through American Airlines AAdvantage & Alaska Mileage Plan. For more information on how this trip was booked, please see our trip introduction here. For other parts of the trip, please see this index.

I booked this ticket using British Airways Avios. At the time, I was underwater with work assignments and missed the reward availability in the early booking window at about 4 months prior to the departure date. There were previously 7 BA Avios Award seats available but they all disappeared by the time I was able to get my act together. I was able to find availability from neighbouring Livingstone, Zambia and marked that as “Plan B”. However, I kept my eyes on the flight and at about the 2 month mark, two additional reward seats opened up (when there were none before). I moved on them quick and booked us into Business for the terrific off peak rate of “7,500 British Airways Avios points and $50 USD” per passenger.

British Airways has decided not to offer seat assignments until 24 hours before the flight, even for business class passengers. In efforts to secure a better seat, I attempted on line check in. I received a message indicating that it was not possible and that I should “proceed to the airport” to check in for seat assignment.

As it seems with most of our experiences throughout Africa, it was a disaster at the airport. Although the Victoria Falls Airport is brand new, the logistics organization is at a melt down point. It’s almost amazing considering it’s an airport with only one other small flight leaving this hour. We joined an unmarked queue of about 150 persons; all waiting to be checked in. There was no marking or indications as to which carrier the line was for, and there were ground cosmetics indicating that it was for, at one time, Air Zimbabwe.

I held a place in line and sent MrsWT73 up to speak to a ground agent, who later identified an unmarked business class line up of 5 people towards the front of the large queue. Thankfully, we were able to scoot around and avoid a several hour wait.

Since British Airways Comair offers a 2-3 business class configuration, I attempted to get us assigned to the 2 side in seats A & C. The check in agent feigned the inability to change these; “We are working with a new computer system and it will not let me change them”. He pointed towards a cardboard sign on the counter that pled for patience as BA worked to “enhance customer service”. Meanwhile, at the nearby economy counters, the ground staff proceeded to soak the passengers for overweight bag charge fees, despite much protests from those travelling.

There was no announcement of a lounge invitation but I started to get excited once we got airside.

We ended up having beer at the local café instead. Perhaps there is no surprise that the Air Zimbabwe flight was cancelled.

The Victoria Falls Airport has improved itself considerably compared to the last time I was through here. It was a nicer than expected facility clearly designed to attract and increase tourism. It was nice and bright with enough to keep you entertained while awaiting your flight. If they would only fix their logistics issues on check in, it would be a better traveling experience.

As was the usual African boarding experience, there was no priority boarding announcement, or any announcement at all for that matter as the crush to get on board began. We got slightly run over by a few elderly Germans who pushed their way past us.

On board, despite only two reward seats available, surprisingly there were only 4 persons travelling in Club Business Class; one being a dead heading second officer (that means another first officer in addition to the one flying the plane) and the other a passenger traveling onto Amsterdam and then to Seattle.

We ended up moving over to our preferred seats 2A and 2C. There was not a lot of room the the BA Club product and I can’t really see why you would fly BA Comair if given the choice between South African Airways and BA Comair.

The equipment is quite worn well past its due date and looks tired and saggy. This time, we were in leather seating as compared to our last flight which had fabric covered seats.

We ended up waiting for about twenty minutes past the regular departure time for a poor couple who was stuck in the check in line and counter for what would have been about 3 hours. They were apologetic as they walked past to their seats, saying that their delays weren’t their fault. While we waited, a pre-departure beverage of sparkling was offered during this time.

As we eventually departed Victoria Falls on the climb to altitude, there were always interesting bush views of the landscape. I always find it completely amazing in contrast to Europe (which is highly dense and populated) and North America (which is usually covered in freeways).

The Meal: A Full Lunch

A lunch option was presented. The food was not that great and wasn’t all that interesting in its presentation.

The starter was a green salad with feta, cherry tomatoes and a multi grain bun.

This was followed by a similar dish to our British Airways Club Johannesburg – Cape Town flight earlier in the month.

There was pleasant service from the crew of one serving Club today, in addition to regular top ops of wine.

My Thoughts on British Airways Club:

The British Airways Comair Club Business Class, in my opinion, doesn’t measure up to the South African Airways Business Class equivalent. It does appear to be substantially cheaper (about 25% cheaper on paid fares compared to SAA) and much cheaper on reward miles. Aside from that, I doubt I would fly them again if price were no object as the whole process in our case seemed massively disorganized.

If you had the choice between the old South African Airways and British Airways Comair, which one was your preferred carrier?