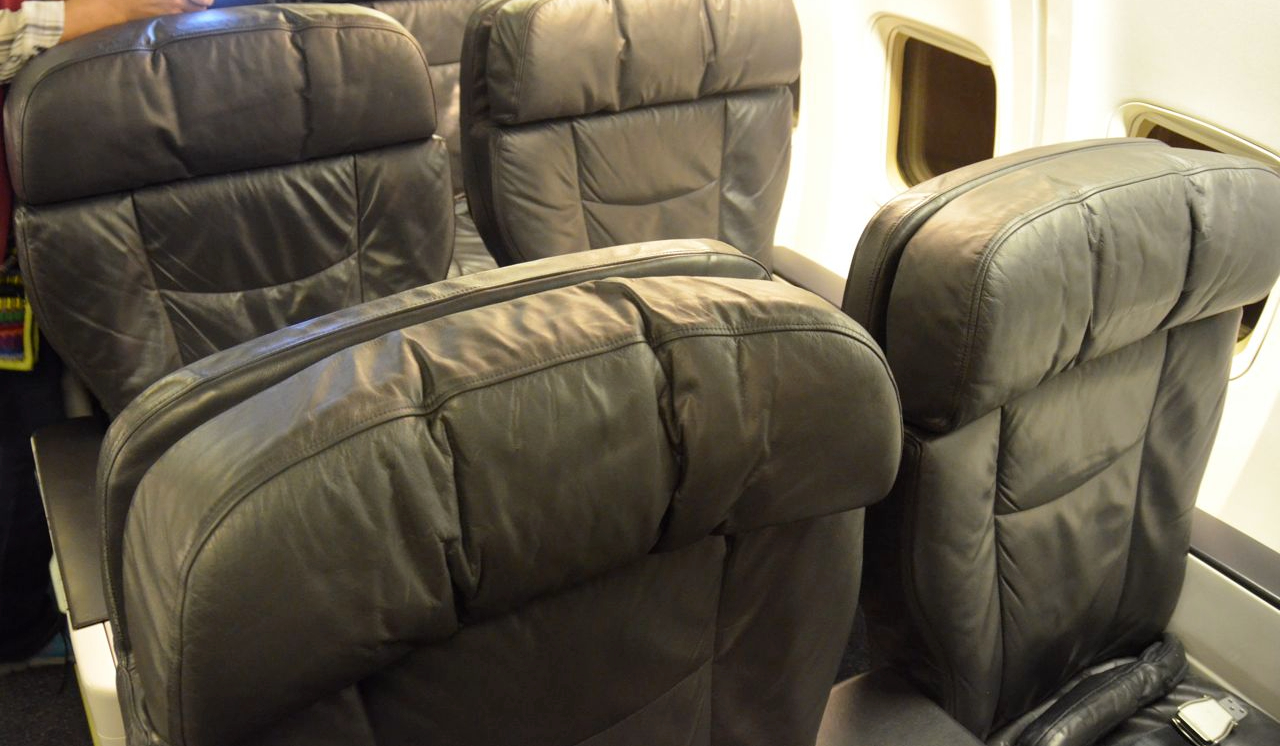 Alaska Airlines offered non stop service from regional Bellingham, Washington, United States to Hawaii. Their strategy was to attract Canadian travellers crossing the Canada / United States Border for cheaper fares than departing from their usual Canadian Airports. Alaska Airlines First Class Service was pretty good and highlighted by some unusual catering, and a comfortable way to get to Hawaii.

This post is one chapter on our trip to Honolulu & Maui, Hawaii, United States of America. This trip was redeemed through Alaska Mileage Plan and Fairmont President’s Club. For more information on how this trip was booked, please see our trip introduction here. For other parts of the trip, please see this index.

With a dinner time flight, we left the house at about 1 PM after a half day’s work at the office. As we were coming down from Canada, there were only three cars in the Nexus expedited screening lane at the Peace Arch Canada / United States Vehicle Border Crossing. We had a quick drive down a deserted Interstate 5, and we were in Bellingham in 20 minutes.

We had a quick visit to Costco for some household supplies and then up to the Bellingham International Airport at Exit 258. The Bellingham International Airport is a quiet facility, which is deserted at most times. It frequently serves the Las Vegas flights for all the Canadian travellers looking for cheap fares flying out of US airports. You can also connect up to three times a day to Seattle and onward on the Alaska Airlines network.

There must be some rowdiness in the parking lot for all the Las Vegas bound travellers. I’ve never seen an airport parking lot explicitly advertise “no drinking”.

We headed for the Alaska Airlines first class check in line and an over zealous ground handler kicked us out and away from the counters to check in at the economy kiosks. We were able to check in and self tag our own baggage tags but the roving wifi bag attendant was not able to link them to our reservations. We then were returned to the counter where they sorted it out and “oh, – you guys are in first class” comments. The whole process was pretty quick despite the back and forth and we were on our way over to security in less than 6 minutes. The entire lack of people thing at Bellingham International is pretty consistent of our trips through Bellingham; it’s almost like flying private.

Since there isn’t much land side at Bellingham, save one tired coffee shop, we headed for the nearest equivalent of a lounge, which is actually the only real restaurant on the secure side of Bellingham airport. We were TSA Pre-Check approved, but since they don’t have a separate area for TSA – Pre-Check, we ended up in the regular queue with Pre-Check markers. I would call it “pre-check light”. We didn’t have to take off jackets, belts or shoes but no separate screening with bags going through the regular x ray machine along with non pre-check travellers. It was a sad state of affairs with 11 TSA-Agents working to security clear one queue of Boeing 737-800 aircraft travellers, since no other flights were departing at the same time as ours.

We headed to Scotty Brown’s Social House restaurant for some drinks and some wings prior to our six o clock flight. There was free wifi at some slow speeds made the time go by much faster.

We finished off with some great airside sunsets waiting for our plane to arrive. There wasn’t much else happening here with only 2 other flights for the day departing from the terminal.

The Alaska Airlines flights that serve this route generally travel Las Vegas – Bellingham – Hawaii. Today’s flight was arriving from Las Vegas. Our in bound flight was about 15 minutes late but they made up the time as fast as they could once it landed.

At about T-30 (of the new delayed time) we headed over to Gate A. The only problem with being a road warrior on Alaska is that they seem to offer and announce free gate check of carry on’s immediately before boarding. This generates stacks of gate crowds as those that do check a bag (and on this flight there were more than 15 last minute gate checked bags) never seem to clear out of the way.

Pre boarding was announced for seniors and children under two, with quite a few grey hairs, some in wheel chairs and some running with canes and oxygen. First Class boarding was announced, followed by Alaska MVP’s and other top tiers. Thankfully, the line agents were enforcing the boarding priority by both questions in the line and at the podium so it made for an easier experience.

On Board Alaska Airlines First Class:

When it came time to board, we walked up the ramped jet bridge. There aren’t any jet bridges or elevated gates at Bellingham. The Alaska “Hawaii” Aircraft feature a lei of flowers painted around the head on the bottom of the vertical stabilizer.

Alaska Airlines First Class features a 2 – 2 configuration with thickly padded First Class recliner seats. They always have a heavy duty blue leather all over them, which a plush appearance. There are typically four rows of first class.

In my experience, no pre-departure beverages are usually offered on Alaska, but a small bottle of Dasani water was waiting for us on the seat. While it’s a long way from the open bar pre-departure beverage of many other American carriers, it is better than nothing at all. The printed menu was also left in between the seats as well.

I find that Alaska Airlines catering is usually a little bit different. The menu items are sometimes quirky and unusual. I find it a relief from the mundane, but MrsWT73 doesn’t like the strangeness of it all- preferring more mainstream like “United” Airlines style catering.

As we settled in, 3 crew were assigned to take care of us. You can really tell the difference between Alaska crews compared to some of the other legacy carriers – the “in charge” was genuinely thanking Bellingham ground staff for the quick turn and providing some entertaining in flight announcements.

We were airborne really quickly since there is no wait on the runway here in Bellingham for any inbound / outbound traffic. Drink and dinner orders were taken by status, in our case working from 2D/F backwards down 3D/F, 4D/F and back around 4A/C etc to our seats in 2A/C.

The Meal: A Full Dinner

Our in charge flight attendant informed us that they had 8 shrimp and 8 short rib loaded and was apologetic if we didn’t get our first choices. MrsWT73 didn’t care much for either option but didn’t opt for any thing from economy that was offered as an alternative. The economy meals were snacks only.

I had my usual gin and tonic to start, served with plenty of ice and properly accompanied with a lime.

Alaska Airlines had a promotion where they were featuring Browne Family Wines, serving both the Chardonnay and the Cabernet Sauvingon on board. The flight attendants indicating that most passengers preferred the red, over the white but I decided to give them both a taste.

Today’s first course was the Island Market Salad: a mesculin mix with fried garlic chips, sweet onion, mango and chèvre crumbles, miso seasame citrus dressing, with a warm Hawaiian sweet roll. The warm Hawaiian sweet role was surprisingly like the Parkerhouse Rolls I used to love as a kid at the Royal Fork buffet near you. It was all pretty tasty. I paired this with a Browne Family Vineyard Chardonnay.

The main was the Sweet Thai Chili Grilled Shrimp, with jasmine rice, baby bok choy. The Thai Chili lime sauce felt as though it was from a bottle at the local Safeway. However, I have to give some props to Alaska for serving something actually a little less mainstream than the usual carriers.

Dessert was an unusual but tasty ginger lilikoi crème brule.

Alaska doesn’t offer television monitors, projectors or other hard wired entertainment fitted into it’s seats. In first class, you get offered a small tablet for free with the headphones to match. These are also made available for free to Alaska Airlines Mileage Plan Elite MVP Gold Members. Lastly, they are also available to rent if there are any left.

The content is streamed via wifi. It’s worth noting that there is no other internet available on the way to Hawaii so this is your sole source of entertainment.

I finished off the flight with the movie American Sniper, some nuts and a Mai Tai! Thank heavens I wasn’t driving at the end of this leg.

Before we knew it, we arrived in Honolulu. It’s been about seventeen years since I’ve been back at the Honolulu airport. The last time that I was here was when it was a transpacific stop on the way to Australia. At that time, Canadian Airlines (who was absorbed by Air Canada) was in One World and you switched planes by crossing the hall in order to get off of your Qantas plane in order to get onto another connecting flight to and from Canada; typically Vancouver. The place didn’t look all that much different. It was still concrete and drab looking.

Overall, we were quite impressed with Alaska’s offering compared to the other options from Vancouver which was United via San Francisco / Los Angeles or non stop on Air Canada. It’s apparent that they treat their employees a bit better as well, since everyone is usually quite cheery by comparison. I enjoyed the funky food myself, whereas MrsWT73 did not. Either way, she’s keen to return shortly on Alaska so they must be doing something right.

If you’ve flown Alaska Airlines service from Bellingham to Hawaii, was it a convenient alternative than departing from Seattle or Vancouver?