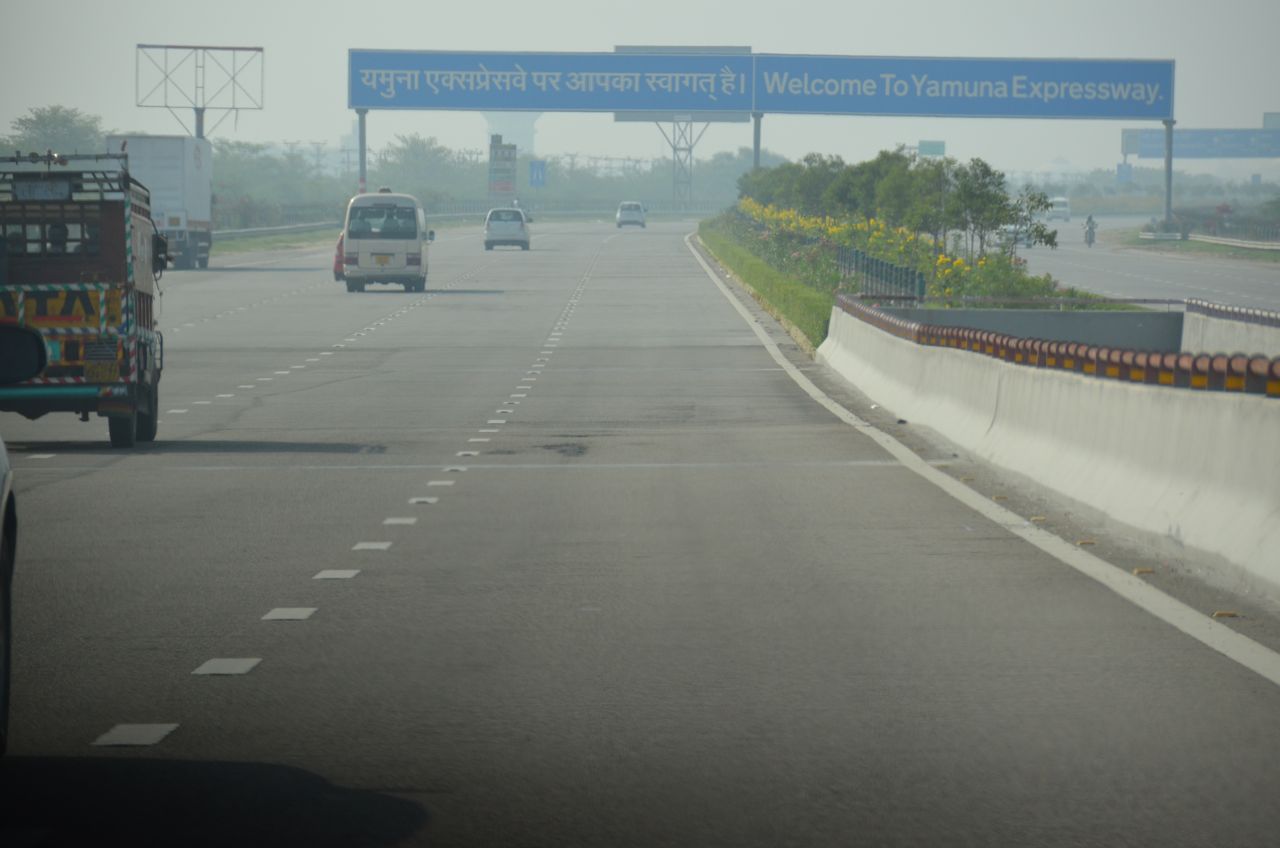 We had debated on how to get from New Delhi to Agra in order to take in the Taj Mahal. The options included taking a train, a bus or a private car. We ended up with the private car courtesy of our hotel. This option allowed us the experience of having freedom of time, in addition to being able to stop on demand for sights and scenes at a whim. It would turn out to be the right choice for us, even if the trip up was a little sterile.

This post is one chapter on our third Round the World trip via South Korea, Vietnam, Singapore, the Maldives and India. This trip was redeemed through Air Canada’s Aeroplan and through Starwood Preferred Guest (Marriott Bonvoy) and Hyatt Gold Passport (World of Hyatt) loyalty programs. For more information on how this trip was booked, please see our trip introduction here. For other parts of the trip, please see this index.

India’s Golden Triangle consists of the cities of New Delhi, Jaipur and Agra. The transport between the three can be somewhat challenging. There isn’t any one solid or regular way of connecting between the cities. Many travellers take the train between New Delhi and Agra. Given what I had heard through research and talking with friends, the town of Agra was nothing to right home about. Based on that, I ended up booking us a day trip to Agra from New Delhi with the plan of returning to New Delhi in the evening to minimize moving around too much. It was an expensive option but probably the best one for our circumstances. It also allowed us to save a day or two of travel getting in between Agra / New Delhi and Jaipur in that we didn’t have to line up with any train schedules.

Getting on the Toll Road:

At the early hour of 7:30 AM, we departed The Leela Palace New Delhi for the three hour drive to Agra in another nice hotel supplied BMW 525d sedan. There was a bit of traffic leaving, including an accident not involving us almost right outside the hotel. The accident was dealt with by all drivers within view of the accident abandoning their cars and standing around looking at the situation.

We were on the Yamanua Expressway before we knew it and headed out of New Delhi. The Yamanua Expressway was a new toll highway that has shortened the usual drive to Agra. It was built and opened for the year 2012 at a cost of $1.8 billion USD. It is currently the longest controlled access highway in India.

There were some entertaining signs that were along the way. Some of the signs would have been an issue for civil libertarians back at home. The drive was pretty rural, given that agriculture is an Indian industry. It was also pretty flat along the way.

Our three hour trip up had us pass through several toll booths. The Yamuna Toll highway was similar to the routes chosen by Europe’s high speed trains- they skirted most local towns and led for a sterile travel experience as you sped along to your destination.

Agra itself is not a pretty town. I had read about it being a less than appealing place and it’s fair to say that aside from the river and the Taj Mahal, it didn’t have many redeeming qualities to it. The one thing that it did provide was an insight into local Indian life outside of the big city of New Delhi. There were families at the cross roads of commerce, people changing transportation and local markets set in a rural environment. Anything goes here and from the windows of our car, we were able to pass by and see some of how the rest of India goes about their daily life.

As we got to see more and more of Agra, it turns out that we were way beyond the “land of no sidewalks”. Agra isn’t a place where I’d want to be stuck on my own without any money. I could probably make it out of there alive and in one piece, but it wouldn’t be a pleasant experience. Those working in this area, or at least the people out on the street during our visit, appeared to have the harsh reality of heavy manual labor, exceptionally rudimentary infrastructure and an existence that didn’t look all to promising from our western perspectives.

Looking at people on our travels by, I initially thought that they didn’t look all too happy. But after I thought about it, the difference is what makes travel through India all that more interesting. It wasn’t that people weren’t happy, it’s just that everything was different from our western lives. I’ve never traveled anywhere where every part of daily life is out on the streets. I’d never consider carrying around carrying my infant child on a motorcycle riding side-saddle next to a garbage truck but that’s exactly what happens here. It seemed that every aspect of daily existence intersected at Agra. Families ate, people stocked up on food, shopkeepers people fed monkeys. All of this occurred all over, in front of you, as you went on about your daily lives. It’s one of the blessings of travel in India and if you don’t look for it, you’d miss it in a heartbeat.

One other feature of Agra to get used to was the amount of wild animals that were located on the city streets. With cows and other animals being sacred in India, it took a little getting used to seeing cows intermixing on payment and among city streets.

My thoughts on travelling by car to Agra:

We were fortunate enough to travel by car from New Delhi to Agra. While the drive up was on a sterile toll highway, it was the street scenes at each end that were the most interesting. While we may have missed out on the experience of riding on India’s trains, it was super comfortable way to get from city to city at your own schedule not having to have worried about time tables or schedules.

If you’ve travelled overland from New Delhi to Agra, would you travel by car or train the next time you’d visit?