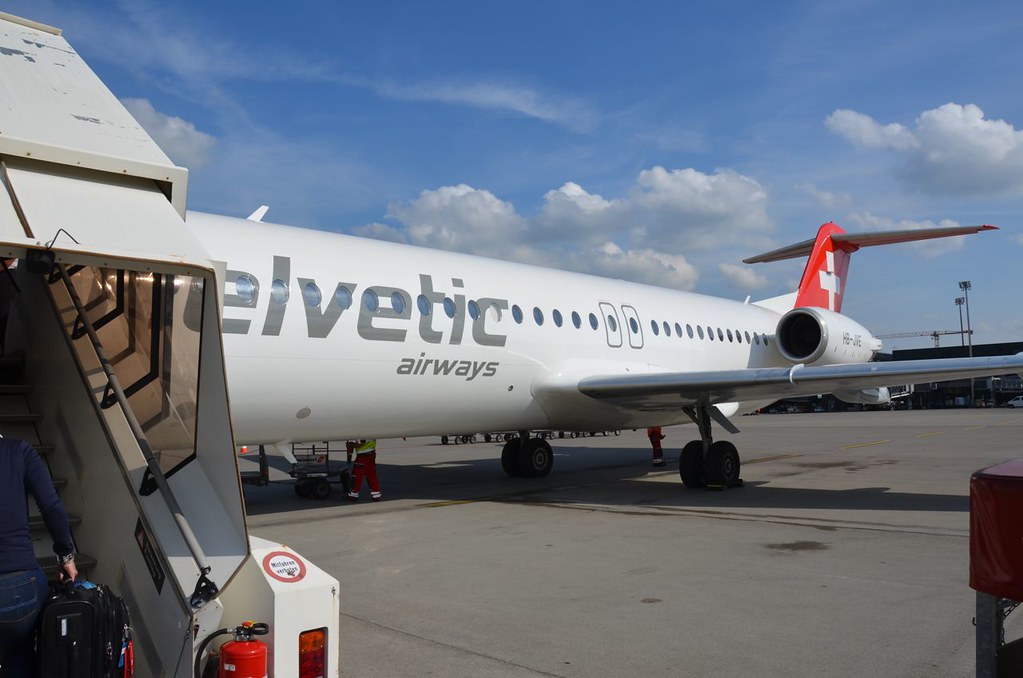 In another case of “you can’t get there from here”, we were only able to find frequent flier reward space in business to Warsaw from Istanbul via Zurich. The lone Star Alliance Member that offered non stop service “LOT” had no space available, making us take the longer way to Warsaw via Zurich on Swiss Airlines. As a result, we had a stopover in Zurich on the excellent Swiss Airlines Business Class product while we headed up to Warsaw, Poland.

This post is one chapter on our second Round the World trip via Japan, the United Arab Emirates, Oman, and Poland. This trip was redeemed through Air Canada’s Aeroplan and through Starwood Preferred Guest (Marriott Bonvoy) loyalty programs. For more information on how this trip was booked, please see our trip introduction here. For other parts of the trip, please see this index.

Today’s third flight of the day was operated by Helvetic Airways, a company that operates flights for Swiss Airways. Helvetic Airways was also known for the Belgian jewellery heist where armed bandits held up the cargo of the plane in Belgium and made off with several million dollars of jewelery bound for Zurich in 2013.

We left the comfortable Swiss Airlines Senator Lounge “A” Zurich, Switzerland and headed to the A gates.

We had boarded via a bus gate from A51. We were on the last bus being transferred to the aircraft today as MrsWT73 wanted to pick up a bottle of the Swiss wine that’s in the red metal container with the red cross on it. We had a bit of a talking to from the carry on police to MrsWT73 about having an extra bag (containing the wine), despite being in business class today.

“Oh my word – it’s legacy. “ said MrsWT73 as we boarded the Fokker 100 taking us to Warsaw. “If I had known you were going to book me on an old plane, I would have picked a different destination”. As always, famous quotes from a spouse accustomed to luxury travel.

On board, the configuration on the Fokker 100 is 2-3. There are three rows of business class, which is adjustable depending on demand thanks to the sliding curtain. I’d personally never had flown this equipment type before. There was a gate check available for carry ons but thankfully, we didn’t have to use it. My rollie carry on was stowed under one of the empty seats- or actually upright in the footwell of Seat 4A, which was vacant.

A pre departure beverage of water was served, as on the last Swiss flight.

The Meal Service: A Full Lunch

Once airborne, dinner was served. Today’s choice was a meatloaf styled dish with mashed potatoes, carrots and gravy, or a vegetarian lasagna. I had the beef.

Being sick while traveling is super de-habilitating. Instead of gobbling down any food put in front of you, I picked away, only eating about 25% of any of the meal. What would otherwise be a dream for me of better European airline catering, I couldn’t get down the rich tasting food. I stuck to water and still remained unable to try the Swiss wine.

We had a quick approach into Warsaw with an uneventful landing. Upon disembarking, I was immediately struck by the many MrsWT73 look alikes’ (MrsWT73 originally hails from the Ukraine). I won’t have any problem visiting here!!

At the baggage claim, bad luck struck again. A second long trip, a second lost bag for me. MrsWT73’ red Hey’s bag arrived okay. I think I will avoid the standard black bag in future. Her bright red one never seems to get lost.

I filed the usual the baggage claim report. There were no promises on when it would arrive. “Perhaps tomorrow…” was told to me in a thick Eastern European accent. I had a bit more confidence in the dealing with the crisp and professional baggage department here in Warsaw than I did in Johannesburg that the bag might actually be found. This time, I wass given a computer printed receipt. Although the fact that it’s between Dubai and Poland meant that it could have been anywhere.

Overall, Swiss continues as one of my favourite carriers. The service on board is excellent, and the catering has been generally pretty good. Add a terrific transfer experience in Zurich and some great lounges to go with the experience and you’ve got a recipe for success!