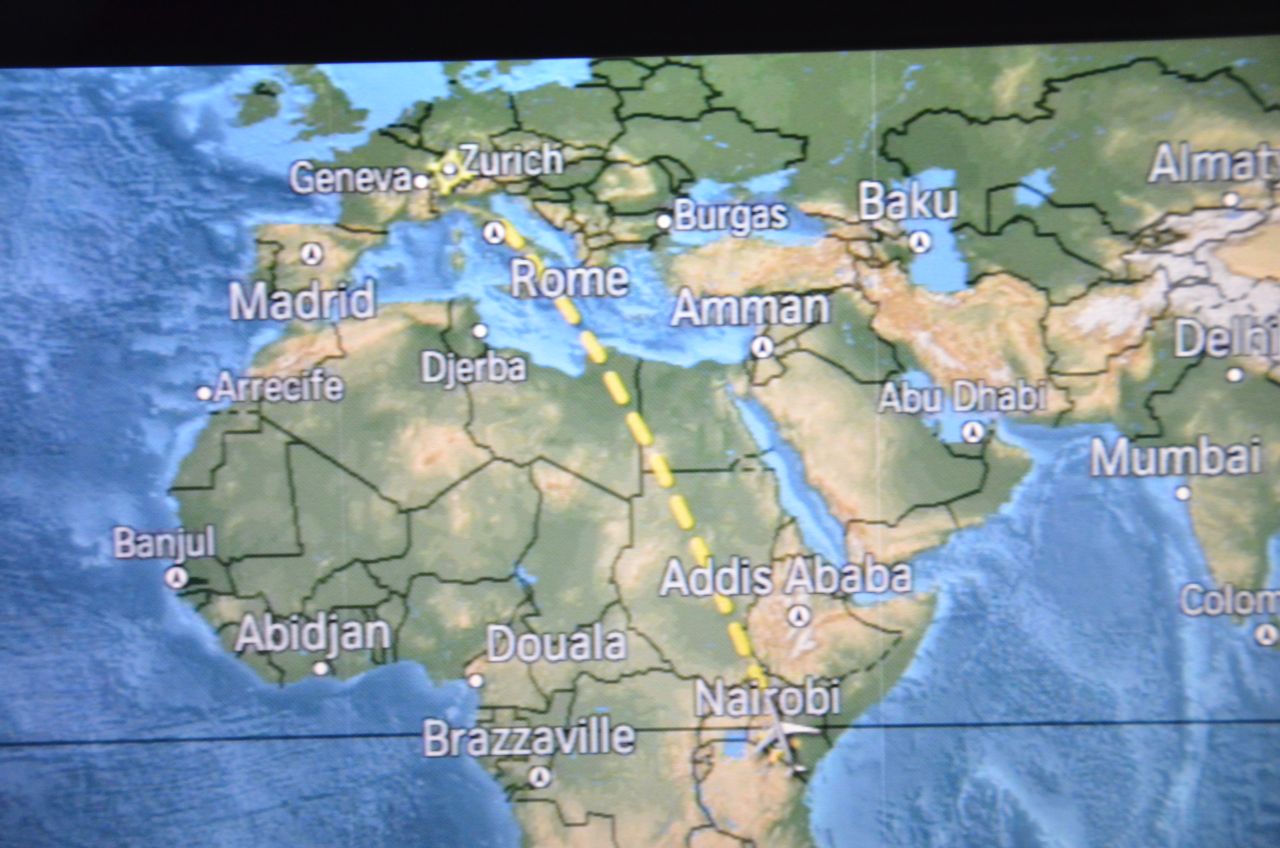 Swiss International Airlines offers select service to and from Africa with the sole flights within the Lufthansa Group to and from Nairobi, Kenya through their hub in Zurich, Switzerland. Although a smaller carrier amongst the Lufthansa Group, it offers excellent service and a comfortable way to fly between their select destinations across the Americas, Europe, Africa and Asia.

We were excited to try the famed Swiss Business product. We were looking forward to the legendary Swiss service, in addition to, hopefully, some above average food and beverage. Lufthansa does not serve Nairobi in any form, leaving travel to and from Nairobi on Star Alliance to Swiss, Turkish Airlines, Ethiopian and South African Airways. By a stroke of luck at about 300 days out, we were able to find at least 3 business class seats between Nairobi and Zurich. Swiss must be monitoring the route because as time goes on, around the 100 day mark, additional reward seats were released.

We had earlier flown Air Kenya Ngrende Airstrip to Nairobi Wilson. We had arrived in the early evening and, after a stop at Fairmont The Norfolk to collect our luggage and a pleasant pre-flight dinner on the Lord Delamere Terrance at the hotel, we transferred in the evening to the Jomo Kenyatta International Airport.

After passing through a Mario Andretti chicane concrete block road security check, our driver dropped us off at the Jomo Kenyatta International Terminal Building. We unloaded our bags from the transfer van next to a white United Nations Toyota 4Runner. At the time of our trip, there had been a large electrical structure fire at the Jomo Kenyatta International Airport and it’s fair to say that the airport was operating under limited capacity. The Nairobi airport website advertised “business as normal” after the fire, however the facilities were pretty cramped. We were subjected to immediate passport check prior to entering the building, and then a baggage x-ray prior to check in.

This time, we opted for a baggage wrap at $7 USD, considering the reputation of Nairobi and the poverty we had seen. The Swiss check in was open at T = 2 hours and 45 minutes. Swiss accepted our bags at the cramped business counter and was able to tag straight to Vancouver. We received our 3 boarding cards ex-Nairobi – Zurich – London – Vancouver and “apologies as we do not have a lounge to offer you”.

After being immigration stamped out of Kenya, we entered one of the worst airports we had been in for a while. Poor air conditioning, many people sleeping all over the floor, WC bathrooms in really rough shape (the worst of the whole African trip– which is saying something) and minimal eating facilities on the secure side.

Through all this excitement, we located what used to be the contract Swiss Lounge according to the gate attendant. Even boarded up, it looked pretty drab.

At T = 60 minutes, with no other options on the secure side, we opted to enter the secure screening pen at gate 14. I asked the document checker at the gate what happened to the lounge. I was told: “Well we used to have four. Two were closed due to politics, and two were closed due to the fire”. The Kenya Airways lounge appeared to be operating as normal but likely wasn’t big enough to handle all the flights leaving at this hour (Emirates, KLM, BA, Swiss and their own Kenya Airways passengers). We located free wifi in the holding lounge area which seemed to be provided via a smart Samsumg TV.

We had peek a boo views of our aircraft from the gate. When it came time to board, it was a single bridge boarding via a jet bridge. This was fortunate as British Airways seemed to be boarding via bus to a non gate position.

On board, we turned left to the Swiss Mini Cabin. The mini cabin consists of two rows of business before first class and just ahead of the galley. The rest of the business class cabin is to the right of the boarding door, and continued on for several rows prior to economy. The seats in Swiss Business Class are configured in a staggered format, with some outer seats having pairs, with some having singles. This means that rows have a 2-2-1, or a 1-2-1, configuration. As a result, seat selection is important on this aircraft if privacy is at all valued.

The first impressions of the seat were of a sleek modern design. I found the seat to be really compact with minimal storage space for phones, cameras and the usual accessories. I also found that the charging ports located in the center console between the seats, were not at convenient or well signed locations. As a result, stuff that was plugged in kept skidding around all over the place while it was on the console.

While resting, I found the seat really tight. Although the seat was a true full flat seat, the seat itself was quite firm. As a usual side sleeper, I didn’t have much room for the knees, which kept bumping into plastic of some sort.

The under video screen area was almost it for the storage space for the business class seat.

A pre departure beverage of champagne or orange juice was brought around on a tray in thimble glasses.

On our arrival, thhe amenity kit was on the shelf of the seat, along with some noise canceling headphones. The amenity kit wasn’t too exciting, with a box shaped like a geometry set that you had in secondary school.

Menus presented with breakfast card allowing option to sleep or to wake up for breakfast. A pen was provided to pre-fill the breakfast order on the card, along with wake up requests.

There was also a breakfast service with the “fill it in yourself” form.

As we got underway, we had a dark takeoff from NBO and headed northbound towards Europe.

I explored the Advanced Video on Demand which had the usual favorites.

The regular dinner service started around 1:10 AM local time. There was a choice of a heavier beef tenderloin or a regional Alper macaroni and cheese. I say regional as it was specific to a region of Switzerland. I opted for the lighter Alper Mac and Cheese, paired with Domaine de Chauviny Beavaix 2012 from Switzerland.

The food appeared to be double catered as most butter, and other amenties (bottled water, jams) appeared to be European as opposed to local Kenyan packaging.

There was also a lovely Full selection of wines. I skipped the bubbles for the starter and went for the swiss white. It was excellent.

I started with the smoked sailfish with couscous as the starter.

For the main course, I enjoyed the Apler Macaroni and Cheese. This was perfect for a late night snack and was a memorable meal for it’s distinctive taste not usually located on an airplane.

I moved through the white wines and into the Spanish Temperillo red wine and the Merlot Bordeaux prior to turning in for the evening. I enjoyed the dessert, which was a coconut and caramel chocolate mouse. Each wine was presented with a fresh glass, something I’ve only seen in the air on European First and Business Class.

On board, the service from Swiss was excellent, particularly by the maitre de cabine. We were personally thanked for “being their guest” and for flying with them. International service is often hard to get “just right.” I felt that the service was genuine. We were fortunate to get a crew that enjoyed doing their jobs.

Despite the cheer-y-ness, the service was not without it’s minor flaws. MrsWT73 asked for a refill on wine that never arrived, and later asked for a refill on coffee that decided to get delivered elsewhere. The non delivery was punctuated by the cabin lights being flipped off and plunging the cabin into darkness. This later proclaimed an announcement from MrsWT73 that Swiss was not her “First choice” for business class.

After dinner service, I attempted to sleep. A pillow and thick duvet were provided. However, row 5A is immediately ahead of the galley station and vacuum washroom flushing noises were quite noisy and as a result, I didn’t get much deep sleep. I would personally avoid the mini cabin next time, as the quiet and exclusivity we were looking for were overtaken by the noise from the kitchen and the washroom.

The flight track this date took us over Egypt (instead of the more direct Libya), Greece and then over Italy to Zurich.

The Second Service: A Light Breakfast

About about 5 AM, and 3 hours of intermittent sleep, breakfast service started. I had the breakfast. It was pretty light affair. It was served on the fill in form from earlier in the flight.

We landed at Zurich International Airport. Disembarking, I had a few chuckling comments from ramp staff about the fact that I was still only wearing a short sleeve T-Shirt from the earlier heat of Nairobi. Being November, there was snow on the edge of the jetway and snow on the ground in dark Zurich, Switzerland. Despite the chuckles, the Zurich airport was fabulous, sleek and modern. It was a stark contrast from leaving the world of African dis-order into the sleek world of European order.

We headed for the Swiss Arrivals Lounge which is marked by this sign on the upper left of the quadrant for a shower and breakfast. It is just outside of the baggage hall after customs.

Overall, I really enjoyed the flight. The amenity kit was a little weak, and the seat was not as spacious as I personally might have liked. However, I thought that the food and beverage made up for these weaknesses. I found the wines to be of pleasant quality and I really enjoyed the taste of the food.

My wife didn’t find the flight as pleasant as I did- citing responsiveness in service and cabin noise as the low points. Despite this, I found the service interactions and execution to be very pleasant and memorable. I’d certainly be up for trying them again.

Those that are looking to find reward seats- don’t give up checking. You might get lucky. They may release more seats as they did on our flight. I’ve found better availability from Europe to Africa / India and Singapore than I have from Europe to the USA where it seemed almost non existent.