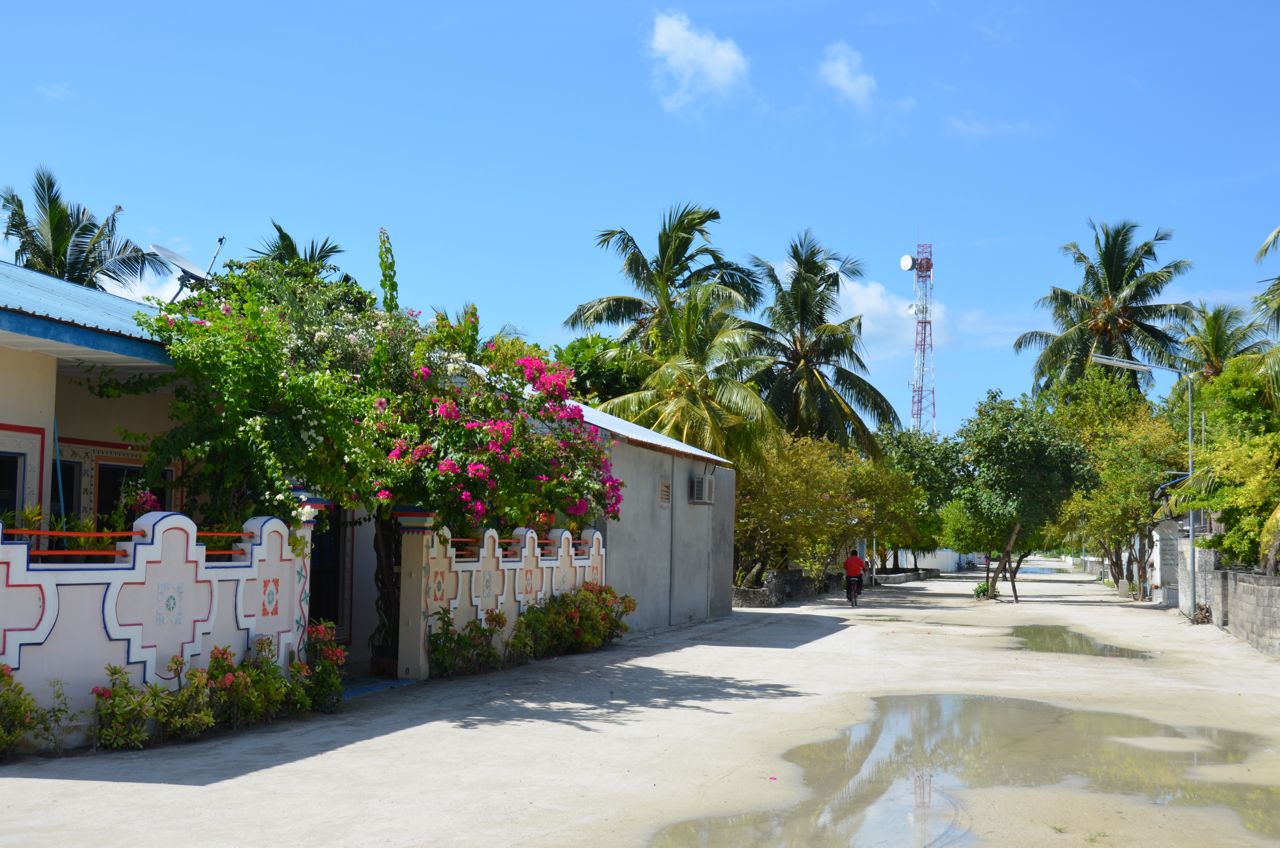 During our stay at the Park Hyatt Maldives on Hadahaa Island, we were offered the opportunity to visit an inhabited island atoll of Gemanafushi Island. Life in the Maldives is among the most segregated in the world with luxury resorts taking over entire atolls, keeping travellers away from locals. This was a unique opportunity to see what local life was like for the local Maldivian residents.

Booking and Getting There:

On our third day at the Park Hyatt Maldives, we booked an inhabited island tour through the resort to Gemanfushi Island. The tour price was $190 USD per person, or $475 for a private tour. However, since we booked with only 3 hours notice, there were no other tour participants.

I had wanted a look into the local lives and to see what atoll life was really like in the Maldives.

Visiting an inhabited island on your own is almost impossible for an independent traveler. First off, foreigners are not permitted to stay the night off of the resort properties unless they get a permit through the government. This means that there is generally no private accommodation on the Inhabited Islands, unless you’ve been sponsored by a local family. Foreigners are also only permitted to visit during the day time hours, and again a sponsor that is responsible for the visitors is required, making it a further challenge to visit Inhabited Islands without an escort. I was told by our Hyatt guide that tours to the Inhabited Island were organized by the hotel for about 3-5 guests per month. I guess in a snorkeling and diving paradise, diving tours or tours to a private island are more interesting for the tourists than seeing the local culture.

On the Ground at Gemanafushi Inhabited Island:

After a quick twenty minute speedboat ride from Hadahaa, we ended up at Gemanfushi island where we had a coconut juice arrival drink. We had an arrival photo taken next to the sign with the unique Maldavian Script. Given the Muslim and conservative population of the island, MsWT73 had to spend more of the tour with her shoulders and legs covered up. In the 35 degree heat, this was no small challenge. It was hot!! The one time MsWT73 is taller than me…

We headed into Gemanafushi, not really sure what to expect. Were these people going to live in houses? Make shift tents? I was curious. There were a few motorbikes on the island and apparently a few trucks, although we didn’t see any. Our first impression was that the island was super quiet and peaceful. There were also a lot of Unicef water tanks to collect rain water from he roofs so that there were appropriate drinking water supplies. To my surprise, and not really sure what to expect in the middle of nowhere, there were concrete houses complete with buried electricity cables and roofs.

Surprisingly, the locals were really interested to see us. Even our guides were encouraging photography of the locals, something I thought was verboten given the strong Muslim religion of the local inhabitants. “take pictures! take pictures!” they said…

Our first visit was to the local hospital. There was no one in residence at the hospital, but there was surprisingly a maternity ward and a functional place to give birth for local island inhabitants. Several women apparently give birth here every year.

I learned that many of the locals earned money on the island by catching tuna by net fishing in the area. Most of the tuna caught by locals was brought back to Gemanafushi where it was dried. It would then be shipped up to Male and packaged (and usually sold to China).

For those that haven’t been following it, the waters in the Indian Ocean (and globally) have been rising at the rate of 1 meter over the last 10 years due to the effects of global warming. Eventually, they fear that since the highest point in the Maldives is 2.4 meters above sea level, all of the Maldives will be underwater. The Maldivian government has been in the process of securing a land purchase in Australia, so that the Maldivian will have a place to go if their country ends up underwater.

Surprisingly the Maldivian’s that I spoke too didn’t seem to convinced that their country was going to sink. It really didn’t concern them too much. Whether this was a disconnect with the news or not worrying about the outside world, it seemed to be a comfortable state of bliss for them.

I also learned that the tradition houses used stones with a dead coral fill instead of concrete to mix the bricks together. There are a few examples of this still remaining amongst abandoned houses and if you look closely, you can see the dead coral mixtures mashed together between the rocks.

Saying “Hello” at the Local School:

We were given permission by the school administration to visit the Gemanafushi School during primary class hours. During this visit, I had the opportunity to chat with the Gemanfushi school prinicipal, who was a Maldivian. The school building served a dual purpose of primary classes in the morning and secondary classes in the afternoon. The principal indicated that the majority of students finished their schooling, and the testing was using Cambridge Oxford school exams that were sent from London. I surprised to see teaching to such an apparent high standard, but I did read previously that the Maldivian literacy rate as 98%. There were of course a lack of computers- I think I saw three in the administration office and that was it for our tour. It was so warm, even our guide was sweating like he was defusing a bomb…

The children were of course interested to see us strange Westerners

We did stop for a drink at the local store. Cokes and Sprites and a juice came to 38 Madlvian Rufiyaa ($2.45 USD), which I thought was a fair deal considering the distance that they had traveled. I later learned that Coca Cola in the Maldivies is the only country in the world where Coke is made using de-salinated sea water.

At the end of our tour, we were invited to one of the tour guide’s family home. We were given a sampling of local foods. “Short Eats” or hedhikaa as they call it – a snack between lunch and dinner. The Maldivian snacks included fihunu mas, (fish pieces with chili coating), gulha (fried dough balls filled with fish and spices), kuli boakiba (spicy fish cakes) and samosa like triangles filled with vegetables. The tastes of each were quite similar – spicy similar to Indian foods, but with an emphasis on fish. Needless to say, it was fabulous.

Swings outside the dock from converted fishing nets.

Before we knew it, it was time to return to Hadahaa. The inhabited island tour was a great opportunity to see the local lives of Maldivians – something you surely won’t get from staying on the resort. Most amazing was the fact that the locals were completely separated on different islands from the thousands of tourists that visit the Maldives every year. Taking an inhabited island tour will be your only way of really interacting with the island

If you enjoyed this post, you may want to look at these related posts that explore other aspects of the Park Hyatt Maldives by taking a look into these areas: