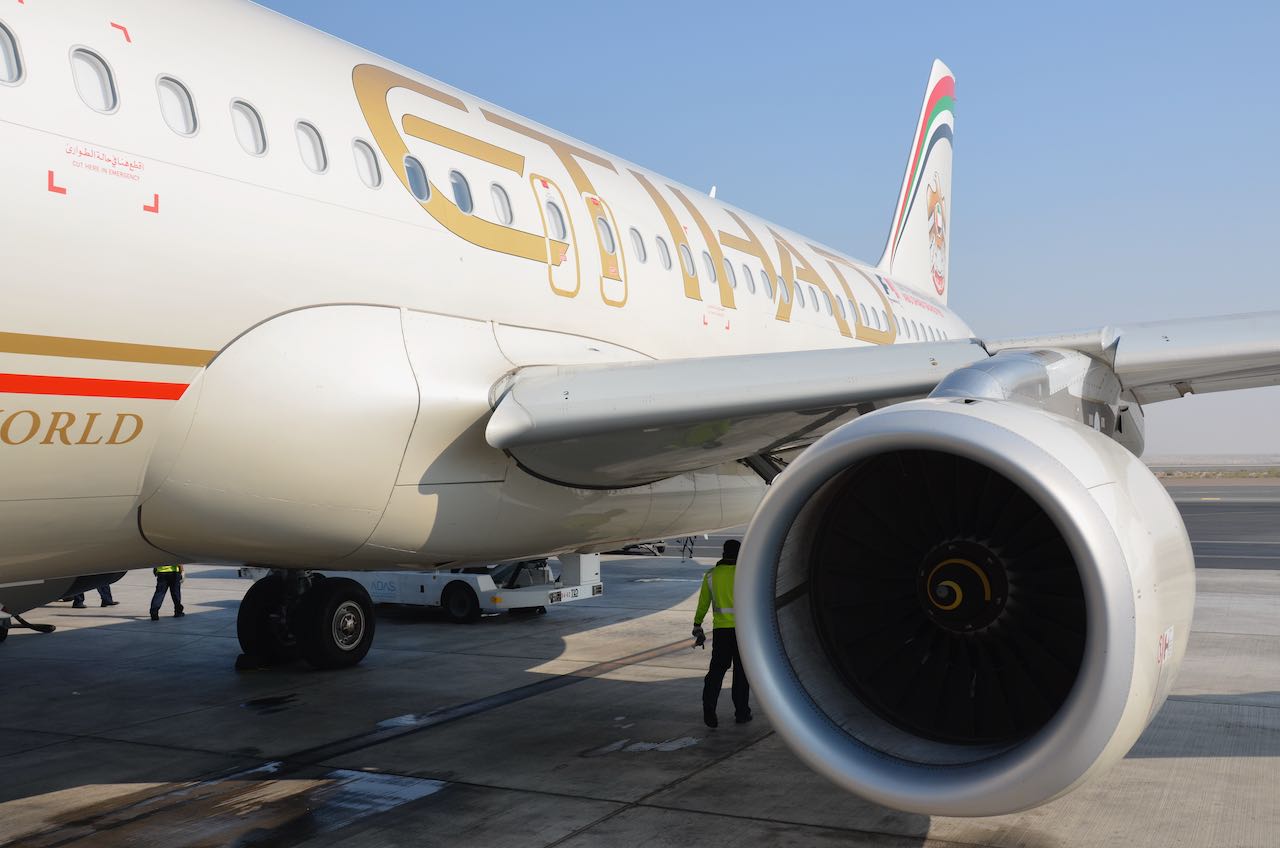 The Middle East Three carriers of Qatar, Emirates and Etihad have increased the competitiveness in air markets around the world in the last fifteen years. Today’s flight demonstrated the lengths that they would go, in order to increase traffic and competitiveness. We had a really enjoyable flight from Abu Dhabi to Male will full service all the way.

Getting ready for the next adventure, we returned the rental car (another 20 minute process involving the car key carrier person, the paperwork processor person, and the person in the back doing nothing but talking on the phone). The rental car return approach was poorly marked and was on the 3rd floor of the Skypark parking garage – apparently no one self drives in this country!!

The check in to Ethiad was pleasant and quick. Our Plusgrade upgrade did not come through this time so we were in the back. Their kind email from Etihad Plus Grade that our upgrade offer ($255 USD per person) was “unable to be accepted”. There was no lineup for Coral Economy. We got off at the check in desk with a verbal warning of our bags being 5 lbs over weight (each). “But sir, they are filled with nuts and granola bars and we’re headed to the Maldives.” This even prompted a knowing nod from him and a brief comment that the Maldives was an expensive place.

There were not a lot of stores on the public side of the terminal, just a lonely magazine stand. The economy check in was next to a completely separate business and first area.

The passport control was immediately after check in and was quick. Security for Ethiad also appeared to have dedicated lanes (both Business and Economy lanes) compared to another flow of lines from other carriers.

The Abu Dhabi airport, like it’s cousin in Dubai, had a massive duty free area, including many high end brands like Hugo Boss, Fendi and Salvatore Ferragamo, including all the wine that we would have liked to drink had it been available on the streets of the UAE. Despite the wonderful innovative architecture of the Dubai and Abu Dhabi buildings, the Terminal 3 airport had a pretty boring layout with small hallways and didn’t really have many exciting views of the tarmac as the concourse hallways were set back from the walled off secure gate holding areas.

Our flight was leaving from Gate 41, which was on the bottom level of Terminal 3. The gate area was a chaotic mess, thanks to over crowded areas with flights to Doha and Brussels leaving from the adjacent gates.

Soon it was time to board the flight. We eventually boarded a bus out to a non gate position.

The harshness of the light was apparent still in the mid of day.

Somehow Etihad has managed to create a super relaxing boarding contemporary music piece to play when it’s passengers board. Like musak, it’s played softly enough to be present, and has an Arabic theme that it keeps Ethiad’s identity. It became a great way to look forward to our trip on our Ethiad flights. Truth be told, it’s even made it to my iPod as the wake up music for my alarm clock at home. It’s that groovy.

On board we wandered into the back past Pearl Business Class. Today we were seated in Coral Economy Class.

Etihad Coral Economy Class on the Airbus 320 is set in the usual 3-3 configuration. We were seated in row 8 which unfortunately did not recline as a result of being one row ahead of the emergency exit row. We had attempted to change this at the check in desk, but we were told that there were no other seats available. Indeed it appeared that there were an unusually high number of people switching seats with each other as many couples had been switched up and separated as we started to get underway. Our seat mate in the other seat of the bank of 3 was connecting inbound from Shanghai. She was from Spain on a business trip and wanted to see the Maldives. And I thought I was the master of indirect routings, this was just backwards!

We were 30 minutes late leaving the apron. We had several aircraft in front of us before take off, including what appeared to be a Presidential Flight on one of their flagged 747’s. I’m guessing this because there were many signs for the “Presidential Flight” terminal on the road approach to the Abu Dhabi Airport.

It’s always neat to spot unique aircraft through the travels and this was no exception. The UAE Presidential Flights are operated via the private terminal for VIP and VVIP’s of the United Arab Emirates.

The Meal: A Three Course Lunch, served all at once

Once airborne, menus were passed out with a choice of chicken, fish or pasta. All meals were prepared to halal standards. I was happy to see a choice of wine available since we had consumed our duty free and by this time, we were in deprivation mode. The wines served economy were Jacob’s Creek Chardonnay and Footstep Merlot. The drinks were served at the same time as the meal service.

The meal was pretty tasty and I had no complaints with the service, food or beverage.

After the meal service, I explored the AVOD, which was in each seat. There were at least 100 movies available, which were provided through a remote system or touch screen. The flight path was more or less straight over Oman, right down to the Maldives.

We were able to get several refills of the wine, which was brought on a tray on each occasion. Maldivian immigration cards were passed out, with a long list of prohibited items on the cards themselves. Alcohol ranks higher on the no-no list than steroids, spear guns, firearms and explosives.

The flight ticked away as we approached the best island destination in the world.

Before we knew it, we were on the approach to Male. The scenery from the air was wonderful and a bonus for those who were lucky enough to have a window and seated on the left side of the aircraft.

We even got a view of Male, Maldives. The capital of the Maldives is one of the most densely populated cities per square kilometre in the world.

Eventually touching down and arriving to a non gate position, it was a quick walk to the Customs’ Hall and the collection of our luggage.

The airport itself was in a bit of a shambles, under going a renovation to serve better. After a bag x-ray, we changed $20 USD into Maldivian Rufiyaa currency for any local expenses. We actually didn’t need to have any local currency in the end, but it’s always great to have some on hand.

I was pleasantly surprised by our Etihad flights. The food was reasonable and surprisingly interesting,, the vibe was great, and the views on any flight to Male are out of this world. There were a few little touches in Coral Economy that made this flight stand out from other flights; the pre-departure beverage, printed menus in economy for a medium haul flight and pleasant service with wine refills. I enjoyed the experience and would chose them again in the future.