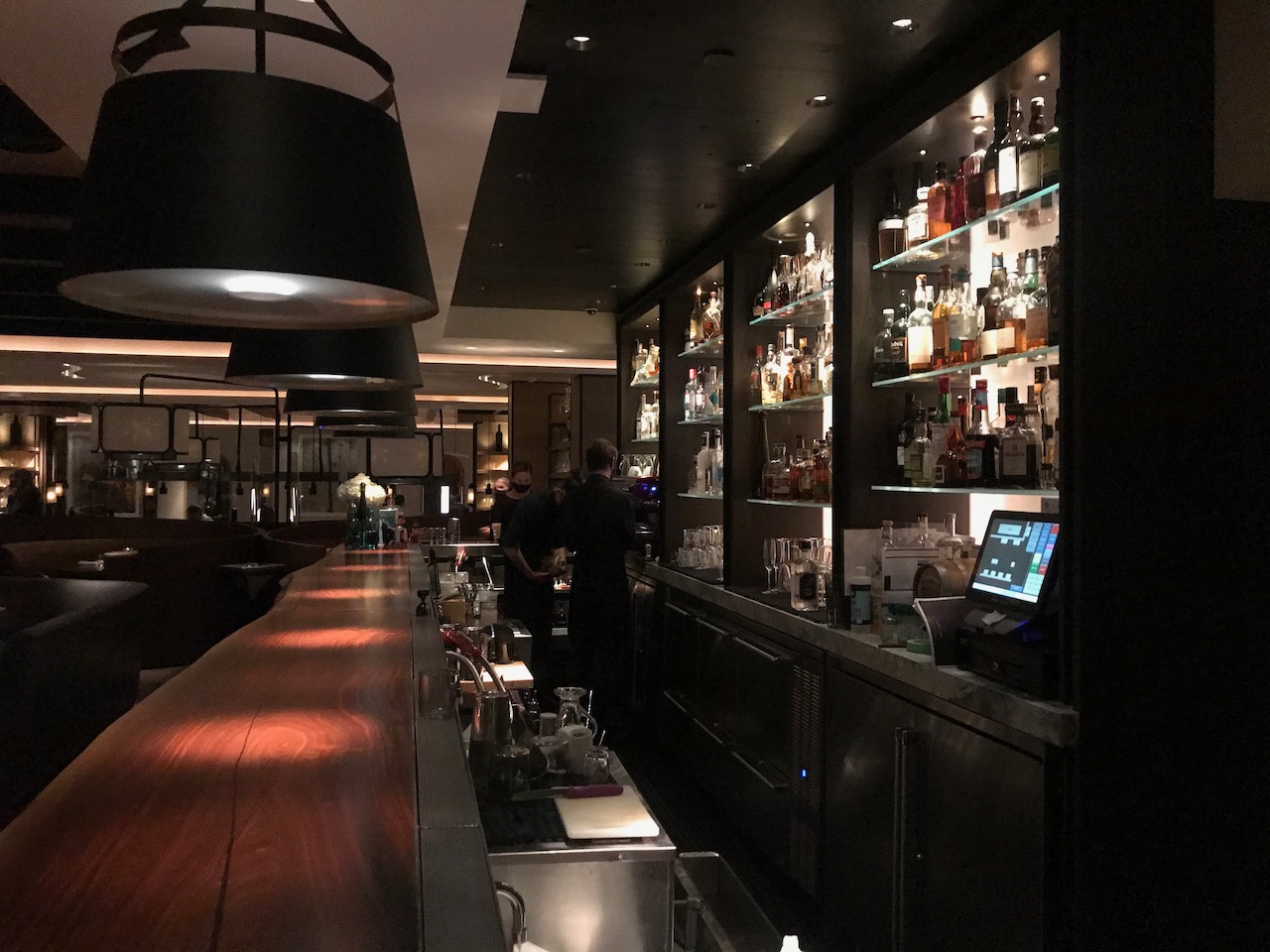 As Vancouver residents, we spend a lot of our free time up in the Whistler area. We enjoy the space, the recreation and the relaxed lifestyle when it comes to hanging out in the valley. During a Whistler weekend during Cornucopia, we happened across the specials at Il Caminetto as advertised in the town newspaper The Pique. With a fantastic four course Prix Fixe at $39 CAD, we were set with a great choice for a weekend dinner.

This review is of the Il Caminetto Restaurant. If you’re interested in a restaurant in Whistler, but something a little different, please here for our experience at The Bearfoot Bistro Restaurant, or the Wildflower Grill Room Restaurant.

There was fresh snow in the valley on our way to dinner tonight. We took the local bus (as one does) into the Village as the snow rested on the valley floor. There was some specular winter scenery on the way to dinner, and the snow made everything feel exceptionally crisp for the middle of November.

While everyone has their own opinion on the safety of pandemic travel, at the time of our visit, there were less than four thousand cases in a province with four million population. The provincial health orders were also allowing restaurants to be open, provided a safety plan was in effect and social distancing measures were in place.

The Il Caminetto Restaurant, like some others in the valley, has been a mainstay in Whistler, British Columbia, Canada for almost thirty five years. Occupying a space in the Whistler Village Suites (one of Whistler’s original buildings on the Village Stroll) it was run as “Il Caminetto” featuring Tuscan cuisine by Vancouver restauranteur giant Umberto Menghi since 1981. After thirty six years, in the spring of 2017, Umberto’s Il Caminetto was acquired by the Top Table Group which run the independent classy and elegant Araxi Restaurant, the Bar Oso and now Il Caminetto.

The new Il Caminetto restaurant is headed by Executive Chef James Walt who has been a mainstay in the Whistler valley for many years. He has a strong love for Italian food and was previously posted to the Canadian Consulate in Rome, Italy. He was also honoured into the British Columbia Restaurant Association Hall of Fame in 2011.

In our case, we arrived on a walk up basis shortly after the 5 PM opening and were offered socially distanced bar seating, or an option for heated patios outside. The restaurant tables were fully booked for the evening on a weeknight, so if you’re planning on coming to town, make sure you book well in advance if you want a reasonably timed table.

Once we had decided on the warmer inside, we were led into the restaurant. As the restaurant had transitioned to Top Table in spring of 2017, everything was fresh, contemporary and smart looking.

Given the current health pandemic, we were offered the opportunity to review the menus on line via a QR code left on the table.

I also happened to capture a copy of the printed menu (after the dinner). The Prix Fixe is the top portion with one course from each column.

For those that prefer it, here is a picture of the entire menu which includes the a la carte section on the lower half of the pages.

We were here for the terrific Prix Fixe value menu with four courses at $39 CAD each. We went with the included wine pairing for an additional $37 CAD each. I found this to be a reasonable value for the food and price paid. It’s also worth noting that the value of the Prix Fixe Menu is typically in off season and on Wednesday – Friday nights only.

To get started, we were offered fresh in house baked focaccia or sourdough. This was served with fresh olive oil and balsamic. The pairing was exceptionally tasty.

It is always exciting to have a multi course meal. The anticipation of it bubbles me over with excitement. Getting underway, our first course was Castelvetrano Olives with citrus, chilies and herbs. This was paired with a sparkling rose from Veneto region of Italy.

MrsWT73 spotted Chickpea Hummus on the menu. Once she saw that, there was no going pack. She enjoyed the Chickpea Hummus with autumn vegetable crudita, crisp ceci, and smoked paprika.

I took taste of this before it all disappeared. It was exceptionally fresh with organic radishes and earth carrots.

Being that it was winter out, I went with a warm soup dish as the second course. This was paired with an unnamed Pinot Grigio that was perfectly chilled. The soup itself had an excellent portion of broth to pasta. The fresh parsley was evident on the palette as the soup went down. It was highly tasty and hit the spot.

MrsWT73 spotted the risotto on the menu. Like the chickpea hummus, there was no going back. As a woman that would never refuse a risotto, she loved this dish. She enjoyed the plate, including the approachable portion size.

For our third course, we both went with the halibut dish, which was paired with an unnamed Rose from Sardinia. The dish was a very tasty combination on the plate. The flavours went well together. The octopus and clams elevated the dish compared to something that I’d be attempting to make at home. The fish was also expertly cooked at just a touch under; moist and juicy.

For dessert, I went with a traditional Tirmasu, which was paired with an Italian Marsala wine. This was presented simply in a coffee styled pot. While it was sweet and tasty, it wasn’t overly memorable compared to the other wonderful three earlier courses unfortunately.

However the real star of dessert was the house made gelato with shortbread styled crumbs, paired with a moscato. Today’s flavours of cherry and sour cream gelato were exceptionally strong and intriguing. MrsWT73 won out here with the better dessert dish of the two we enjoyed.

The cheque was a reasonably $167 CAD ($130 USD), which I found was a pretty good value for 8 plates and 8 glasses of wine. The only information I would have probably enjoyed a little more would have been a little more information on the wines. Despite this, they were very enjoyable in the glass.

Our experience at the Il Caminetto :

The Il Caminetto Prix Fixe was a great opportunity to get in a great meal with many courses and the ability to enjoy lots of flavours. The food was well presented with exceptionally fresh farm to table produce. The wines were enjoyable, but I would have really enjoyed hearing more about them as they were presented. Despite this, they were of exceptional quality and paired nicely with the dishes.

Memorial office chairs represented those on each floor of the Alfred P Murrah Federal Building in Oklahoma City where the United States first incident of domestic terrorism occurred.
I recently visited the Oklahoma City National Memorial to those that perished in the Alfred P Murrah Federal Buildling terrorist bombing in 1995; the first major domestic terrorism incident in the United States. The memorial was well done and respectful of those that ultimately perished in this terrible tragedy.
Modern Fair Fun at the Oklahoma State Fair, Oklahoma City, Oklahoma, USA
On a Recent Weekend In Oklahoma, it was time to take in the Oklahoma State Fair. It was my first experience visiting a State Fair in the Heartland and we got in all the ferris wheel entertainment we could imagine.
The Sunset at the End of Another Great Las Vegas Trip
Catching a Free Concert Triple Header of John Waite, Men at Work and Rick Springfield at the Fremont Street Experience, Las Vegas, USA
My Idea of a Great Evening: An In - N - Out Burger, a Luxury BMW and a Beautiful Woman.
Where It All Comes Together...
Advertisements