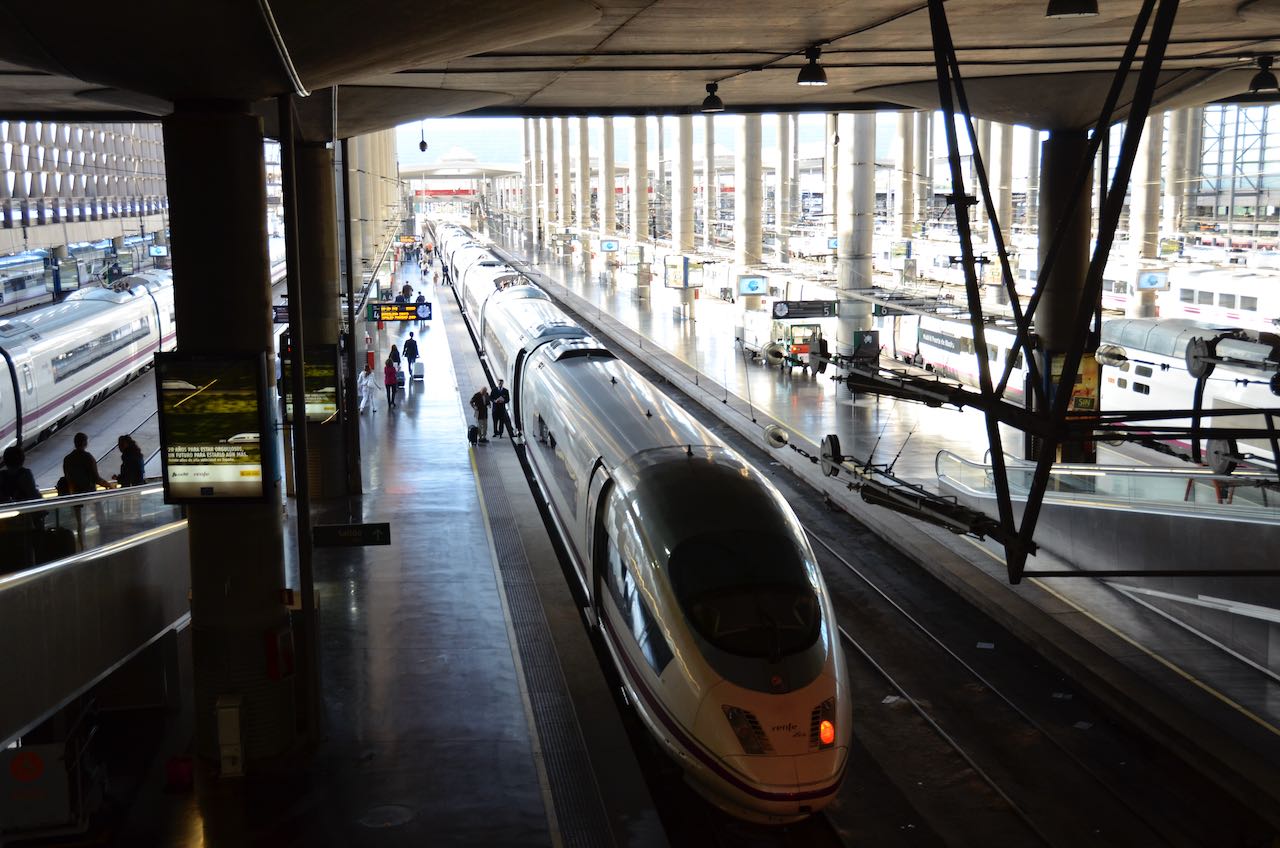 Soon it came time for us to continue our journey to Barcelona. I had considered flying there “Madrid – Barcelona” on a Low Cost Carrier but city-to-city travel in Europe is never as convenient flying from airport to airport. It was time to test out Spains Renfe AVE Train network from Madrid Atocha to Barcelona Sants.

This post is one chapter in our Around the World in Star Alliance First Class via China, Thailand and Spain. This trip was booked using Air Canada Aeroplan miles. For more information on how this trip was booked, please see our trip introduction here. For other parts of the trip, please see this index.

Booking and Getting there:

I booked the ticket through the internet on Renfe with a convenient English version. With a little trial and error, I was able to select the trains that I wanted and it priced. For those considering train travel in Spain, I learned that at the time of our trip, the trains became available for purchase 60 days in advance of your travel dates (no earlier), and I did not notice deep discounts similar to airlines for earlier bookings. The train prices came to 70.60 € outbound and 88.25 € inbound for a total of 158.85 €  per ticket.

On the day of travel, we arrived to the second floor at Madrids Atocha train station. The train departures and arrivals are on two separate floors, with departures on the top floor and arrivals on the lower floor. We showed our tickets and our bags were X-rayed as we entered the platform area. Regretfully this was another sad reality of the train bombings that affected Spain and the rest of the worlds transit infrastructure.. We proceeded through the security screening checkpoint (although the screening was without a persons search).

Inside the Renfe Sala Club Lounge:

We entered into a holding area above the train platforms. With one of us waiting with the bags, and the other one searching, we eventually found the Renfe Sala Club Lounge behind a dingy fire door alcove by Gate #14. The lounge itself was not signposted at all in the terminal. You would pretty much have to wander around the whole place to look for it if you didn’t know where it was.

We walked into our first train lounge experience and waved the bar code on our tickets at the reception desk. The scanner positively beeped and we were allowed access by the lounge matron. Access today was granted by virtue of purchasing a ticket in Preferente (Business) Class. Recently, Renfe has debunked their tickets so that lounge access is not always included when purchasing a Preferente Ticket.

Inside the Renfe Sala Club Lounge:

The lounge itself was tastefully decorated, but not very well equipped. There were some drink machines, and a grapefruit juice dispenser. There were also some snacks similar to what was offered at a United Club, some mini muffins and individually wrapped cookies. There was beer and tonic water mix available but no spirits. The coffee machine dispensed its espressos into plastic cups, which was a little different. There were also a limited amount of free Spanish newspapers were on offer.

As with other train stations, the platform number is not announced until about 30 minutes before departure. An announcement was made in the lounge and we headed over for another ticket check at the platform gate. There was a business line although it was not posted or marked. With another scan of the barcode, we entered in to the platform area.

The Club (First Class) and Preferente (business class) were the closest cars to the train station itself (or the back of the train). I peered into Club cars as we walked by and there only appeared to be two passengers out of twelve seats occupied. There was a representative assisting Preferente passengers at our car door.

We presented our tickets to the host at preferente who confirmed we were in the right place. The weight restrictions on the train ticket were 20kg a bag. Im proud to say (or horrified to admit) that we were way over that; carrying snorkel gear, Thailand Tattler magazines and amenity kits from around the world. Thankfully there were no scales or checking of bag weights.

I pulled our first bag on board and our host assisted with the second. There was luggage storage immediately by the door and there was plenty of room since most passengers appeared to be traveling lightly as business travelers.

We found our way to our seats. Preferente class was set up in a 1-2 layout. The passengers were mostly business travelers working constantly on their laptops and iPads  very similar to North Americas travel circuit. There were a few older tourist travelers. We were among the youngest in the cabin.

On time, the train departed. Within ten minutes were we at 295 km/h, steaming toward Barcelona Sants.

There was a movie on board shown with overhead monitors. The headsets were offered free of charge. The movie of the day was Footloose.

The Meal: Breakfast with Bar Service

Menus arrived to our seat with a full bar service available. Of interest is that the menu is actually one choice of meal in three different languages.

As we were chugging along toward Sants, zipping on a Spanish white wine, Ms Worldtraveller73 commented, “Honey you did a good job”… Success!

Our breakfast omelet was handed out. A decent meal, but not unlike any other egg dishes youve had on airplanes over the years. The meal was followed by a chocolate (mini) service and a second towelette / wet nap service.

Our service today had us stop briefly at Zaragoza Delicias where the majority of business travelers got off. Within 4 minutes, we were again on our way.

There was some lovely scenery on the way up to Barcelona, with some interesting mountain landscapes combined with arid vegetation.

We arrived into Barcelona Sants to a dark and underground rail terminal. We disembarked and made our way up into the station proper, which is in the middle of Barcelona and surrounded by an urban environment  meaning that once on the street, it was difficult to tell that you were near a train station.

Our arrival experience into Barcelona Sants was entertaining. I was on high alert arriving at Barcelona Sants. My sister, who works as a flight attendant for an unnamed Star Alliance carrier has had the experience to travel the world- professionally and personally. Over all the miles that she has covered, it has been mostly a safe passage for her. Safe except for the fact that outside this train station, she was relieved of her wallet and passport by gypsy kids that surrounded her, while others pulled her travel pouch of her shoulder. I wasnt about to have the same thing happen again to me, and knowing that you are most at risk when transiting to and from the hotel with all of your baggage, we circled the wagons as we headed with purpose for the nearby AC Sants Hotel for our home for the evening.

The Renfe AVE is a civilized service to get between Madrid and Barcelona. The stations, like all stations in Europe, are very conveniently located inside the inner city with a minimum of transfer after arrival and before departure. The Renfe AVE food and beverage service was more than expected with a full meal with wine available during our trip. I would easily use them again as a first choice between cities in Spain over flying.