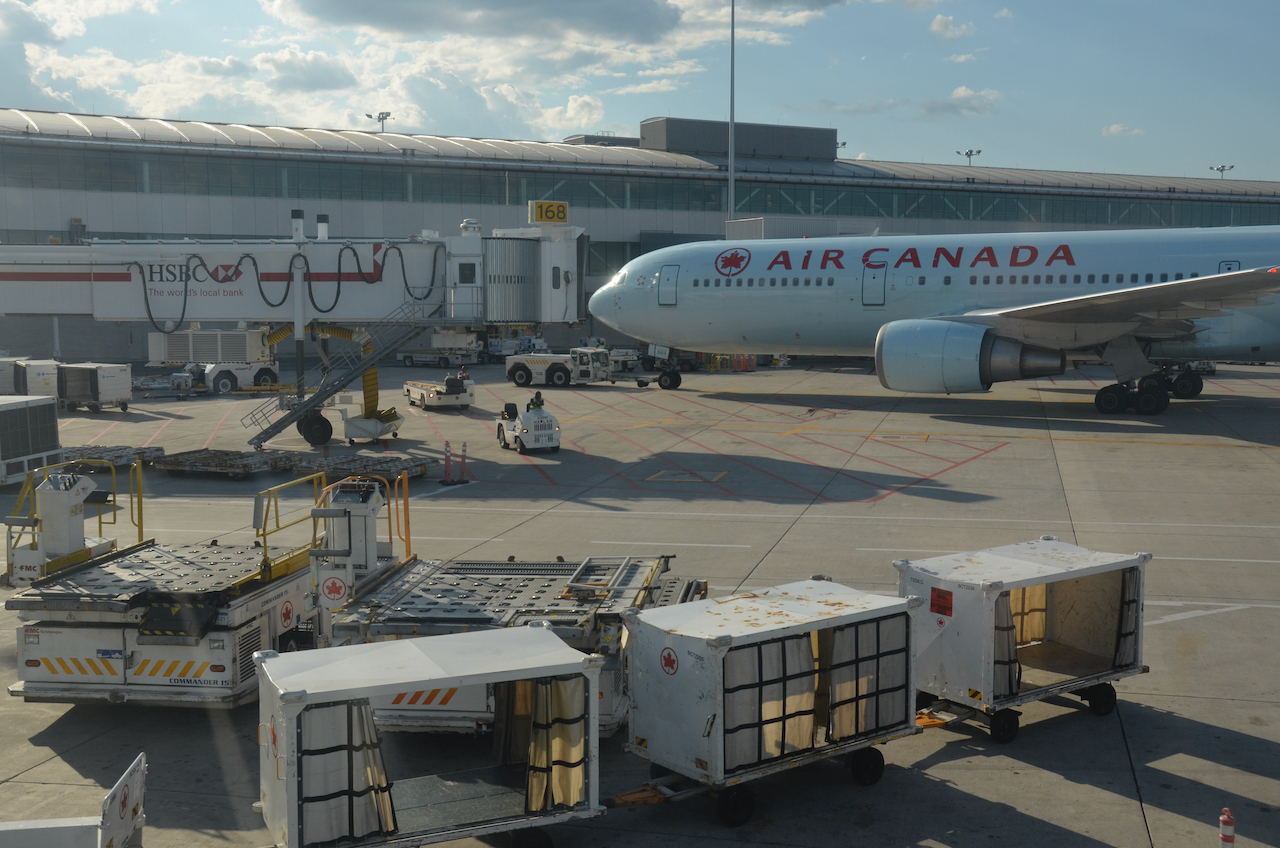 Its never fun or exciting when scheduled flights plans go wrong. Our returning flight back to North America sustained a lengthy delay that left us in Lima for an extra day.

“Our Air Canada Executive First flight home was marked with some pretty dis-organized flight cancellations that resulted in a 30 hour delay and a new aircraft being sent to Peru to collect us. This is what can happen when you rely on 30 year old aircraft for your main-line routes”

Since we arrived to LIM in good time, we had several hours to kill. We walked over to the Ramada Airport Hotel (attached by a covered walkway) and enjoyed dinner there. The menu was quite diverse for a hotel restaurant, and it was a pleasant way to kill 3 hours.

We entered the check in area (passengers only) about 4 hours before our flight home and didn’t see where the desks were going to be. All of a sudden, about 14 ground staff gate agents hauled out the signage, overhead size containers and pop up displays, elite mats and check in was on. We were second in line for the Exec class check in and had no problems with our confirmed upgrades.

Since there was no Air Canada Maple Leaf Lounge in Lima, Air Canada contracts with the local Sumaq lounge which is also a member of Priority Pass. We were given a Sumaq lounge invitation. I got scolded for taking photos in there so not many to share with you. I did use a shower here, which had excellent pressure. Was not a five star facility but certainly better than the local YMCA. The head host made the flight announcements in the lounge. Free Pisco Sours were available and there was a unique outdoor smoking area available in atrium. There wasn’t much food on offer, stale sandwiches, chips, tortillas and small cakes were put out. The best part of the lounge was the extensive bar selection and that it was open 24 hours. The wifi was also free with a code available from the front.

Flight Cancellation & Re-Route to a Hotel:

We arrived to the gate and saw ramp equipment all over the place. Not a good sign. I looked into the cockpit and it was dark, normally also not a good sign! ! ! We returned to the lounge and begged our way back in.

They announced flight delays, which I received on my phone thanks to flight notifications that I signed up for.

Then our worse fears…

Although I was in the lounge for most of this time, I was told that not many announcements were made by the ground staff with the departure sign and flight monitors still showing a departure time of 01:55 AM when our flight was cancelled.

There was a bit of a scrum from the ground staff as they figured out what they were going to do. Business class passports were collected as a group. The ground staff woman disappeared with our passports and returned twenty minutes later with a giant annulado over my passport stamp.

The business class passengers were escorted out on the departures level by staff. I don’t know what happened to the economy class passengers, but they had not started processing their passports by the time we had left. We were put into a private car, which was masquerading as a taxi and taken to the Delfines hotel in San Isidro. We were told at the airport before we left that the flight was re-scheduled to leave at 4:30 PM on Sept 6 as AC 2081 LIM-YYZ. We weren’t given access to our luggage.

We got to the Delfines Hotel at 5:30 AM and since there were only 2 people working, we were checked into the room by 6 AM. Not knowing what was happening, I cracked into my laptop and signed up for flight notification for the new flight. We slept for a bit.

After a few hours of sleep, at about 1 PM the next day, I started asking around but could not find any information as to when the bus was coming to get us for our 4:30 PM flight. The hotel front desk staff were not given any information and just told us to wait around.

I went back up to the room and checked my booking on line via the Air Canada website and learned that I was re-booked onto AC 2081 in J with a further connection YYZ-YVR in J.

An AC representative eventually came to the hotel at 4 PM – some 12 hours after our flight was cancelled. Surprisingly it was “Donald” who handled our theft of article complaint when we arrived in Lima. I had to ask myself, is it a bad thing when you recognize the ground staff in a foreign country on a first name basis? ? ?

AC determined that the plane could not be fixed, so they decided to fly down an empty 767 to pick up the 179 passengers stranded in LIM. At the time of writing, AC did not have a daily service between YYZ-LIM. Our flight was set to leave on Sept 7 at 2:30 AM as AC2081. Donald said, “Please be in the lobby for 10 PM”

I was packing up the room at 9 PM, when I received a telephone call from AC Ground Agents. A man in broken English told me that they indicated that the empty plane flying down had yet to receive governmental approval to fly over Ecuador. “Yes, it sounds like a joke, but it is not…” said the man. “Please be in the lobby for 2 AM”.

I started to wonder how this late departure was going to affect my 4 day entry Visa and what would happen if I overstayed. I had only another 1 day left on it until it expired.

Due to the lack of information coming from AC about the outbound flight and our connections, I attempted to monitor the ITIN electronically, but the booking reference was re-timed so many times that the reservation computer showed flights that we were on our reservation that had already been cancelled (AC2081).

Returning to the Airport:

At about 2 AM, we boarded a bus that had arrived for us. We eventually departed for the airport at 230 AM. At the check in, we were given $250 voucher in future traveling compensation in an apology letter. I inquired on whether I would be protected on an upgrade for my connecting flight YYZ-YVR but the gate agent in LIM refused to look into it or check us into our onward connecting flights, indicating that YYZ would sort it out. I attempted to pressure him but didn’t get anywhere in getting him to back down.

I signed up for flight notification again after checking in and learning the new flight number. We headed back to the Sumaq lounge and hung out. The bar did close at around 3 AM and the place was pretty deserted except for the cleaners and the vacuum droning away on the other side of the lounge.

The flight was again delayed, but by this time, who was really counting? I guess I was, because I kept track of the flight notifications as they came in.

After wandering down from the lounge at around 4 AM, we eventually departed on AC 2083 LIM-YYZ in J at 6:15 AM. On board, as we taxied toward the runway, the disabled AC plane was sitting on the side of the runway looking very lonely.

On board, not too many photographs given the early morning hour and that we had been up all night waiting for transfers and group movement to the airport.

The service was order was reversed given that the flight was supposed to depart at 01:55 AM, and instead left at 6:15 AM. The crew was a lot fresher than we were.

Turkey and Gruyere Croque Monsieur Half with Grilled Vegetables

I pretty much crashed out for most of this trip home.

Air Canada’s long haul service on these old Boeing 767 birds are a comfortable way to get around. Unfortunately, they’ve been in the fleet for more than 30 years and tend to have reliability problems. When they do, they still don’t have their act together in notifying the group and passengers of the processes. Ultimately, this has likely led to their ultimate decision to off load the Boeing 767 products on to their low cost carrier offering Air Canada Rouge.