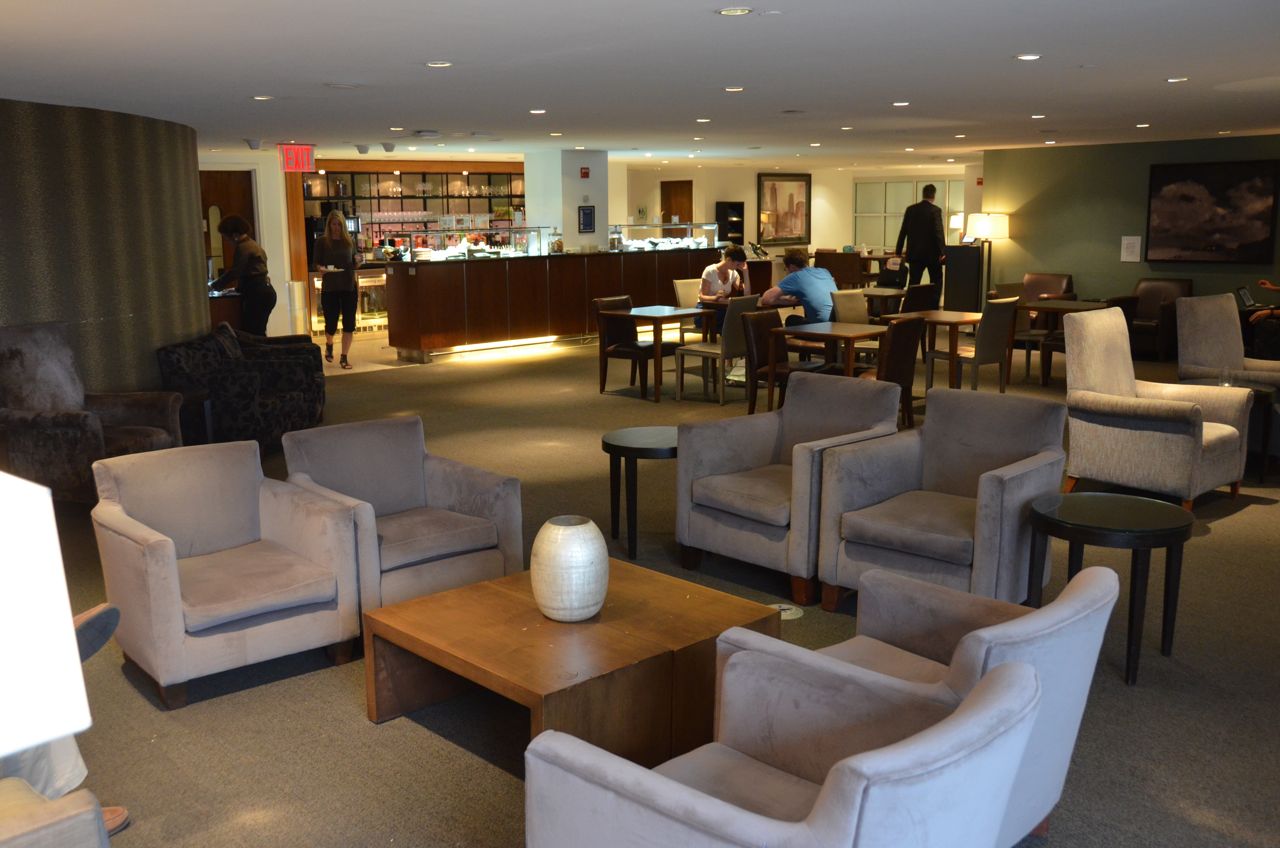 This post is one chapter in our trip to New York City via Cathay Pacific First Class. This trip was booked using American Airlines AAdvantage miles and Starwood Preferred Guest points. For more information on how this trip was booked, please see our trip introduction here. For other parts of the trip, please see this index.

Forgoing the Dial 7 car service we booked a Carmel car transfer this time with a day’s notice. The driver arrived 5 minutes later in a new black Toyota Avalon that was in much better condition that the Dial 7 car, and earning AAdvantage miles to boot! A quick 40 km/h and 45 minute drive in heavy traffic to JFK and before we knew it, we were in front of British Airway’s T7 check in. The experience was much better and more professional than Dial 7 and we would book again with Carmel in the future.

Cathay Pacific offers premium check in services on the far left of Terminal 7. It’s a facility that’s shared with British Airways and Iberia. Once inside at the premium check in desks, the Cathay Pacific check in desks at the British Airways area were manned but not open at 6:20 PM – with a sign displaying a 6:30 PM opening. No mazes set up yet but the queues to check in had started already.

There were at least six British Airways flights to London during our departure times!!

At 6:30 PM, the displays came up on the monitors and we joined the first line. We ended up stuck beind someone having trouble with his ticket and had to deal with a manager to sort it out.

When we booked the tickets, I was assigned Seat 1A and MrsWT73 was assigned 1K on the far other side of the cabin. Seats 2A and 2K are usually the bassinet position. With some reluctance, and radio clearance from his supervisor, I successfully got the seating changed to 2K and 2D.

Our bags were tagged without issue to Vancouver. We headed over to the Fast Track Security which feed all BA First / Business, Iberia and Cathay flights leaving. Bizarrely enough, the entire security line was sloped uphill about 15 degrees causing an interesting balancing situation with shoes off and bags not really wanting to slide up the conveyor in to the X-Ray machine.

The fast track deposited you in to the end of the terminal, so everything is backwards. Clearly added after to fact, the express services make you now wander through the busy terminal in order to get to the lounge, entrance of which is located by the main regular entrance.

Once into the terminal that is the chaos that is JFK T7. There were several overseas flights leaving, including 5 flights to LHR within the next 2 hours, an ANA flight, a flight to Paris Orly among others, it made for a chaotic experience.

We picked up some duty free, again by the main entrance.

A short ride up the escalators and we were given access to the BA First Galleries Lounge, which it shares with the British Airways Business lounge. It included pre-flight dining accessed from the business side. Access was granted thanks to the One World First Class Lounge access policy that allowed access to any One World First Class Lounge based on a One World carrier first class ticket.

There was also the occasional low rent touch.

The food offerings were pleasant. Nicely catered. Slighty better than your average international lounge but nothing to proclaim as the “best ever”! At least the food is well presented.

I had a few snacks as we settled in.

One area which the lounge excelled in was the alcohol selection. Grey Goose Regular and Lemon, Bombay Saffire Gin, Laurient Perrier Grand Sciele champagne and a great selection of single malt whiskies available on the first side.

Some okay wines, although I stuck to Grey Goose and Tonic. I was impressed that they had four different reds on offer. ^

In all, not a bad place to be for a few hours with enough quiet corners for some relaxation. Aside from the occasional low rent touch, it’s a reasonable First Class lounge that’s a little dark in ambient light.