“The highlight of todays’ domestic flight was the harbour views on final approach into Sydney, Australia”

We were among the last to board, thankfully no one travels with rollies in Australia so there was lots of bin space left. We were into the usual barca lounger seats on this B737 with views of an active apron immediately next to us. 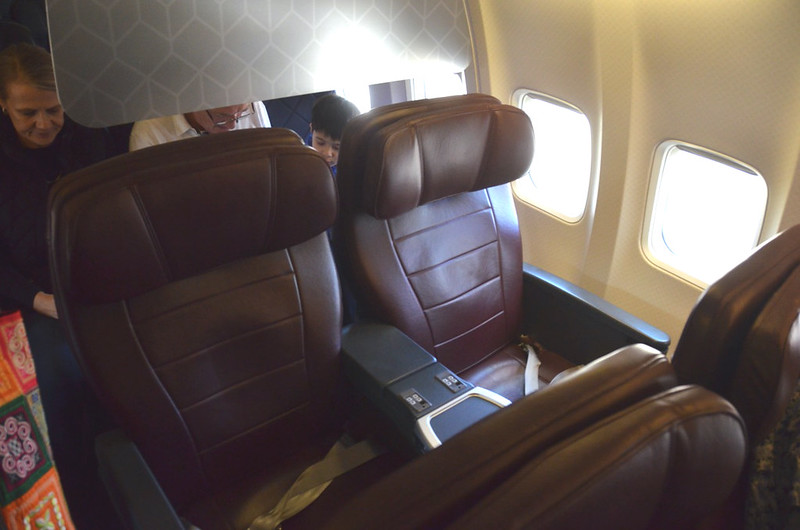 There was a PDB offer of sparkling or still water in a proper glass.

We had an easy departure with no other traffic to delay us today. Our departure track and climb was over the city and immediately southbound.

We had very pleasant older crews today who took interest in us travelling; especially when they learned that we were Canadian. Stories were shared of the crew’s Alaskan Cruises and their journeys on the somewhat famous Rocky Mountaineer Rail Tour through from Vancouver to Banff.

Food and Beverage: A Lunch

Today meal offering was a proper meal consisting of a Moroccan Soup or a Bali Duck with Jasmine Rice and Green Beans, along with a specialty chocolate were offered for lunch. This was paired with Howe Island Sauvingon Blanc. They had run out of the soup option by the time that they got back to Row 3.

Regular top ups of wine were offered, much to MrsWT73’s pleasure.

We had a nice sunny descent into Sydney. Usually when I arrive into Sydney, it’s after a long overseas flight and its’ in the morning when you’re all groggy and tired. It was absolutely spectacular and gorgeous to be able to arrive in the afternoon. We had a terrific view of the city as we lined up toward the south of the airport; we happened to be sitting on the correct side water side of the plane for once.

We eventually passed over the airport as we circled around for the final approach. Sydney’s sure a spectacular place to arrive to when the sun is setting.

We were off at Sydney Domestic Terminal 3 and the bags were out without any issues pretty darn quick.

We rolled over to the Hertz Gold Plus Rewards lane and picked up our Audi Q2. As we were staying just one night, I went with the more economical option to rent a car and self drive versus two Blacklane’s or bothering with the airport train and a taxi both ways.

All in all, our short flight was pretty uneventful. The coastal flying made the views over Australia much more enjoyable. Qantas rates quite high in my book with their offerings and I can’t wait to fly them again in the future.