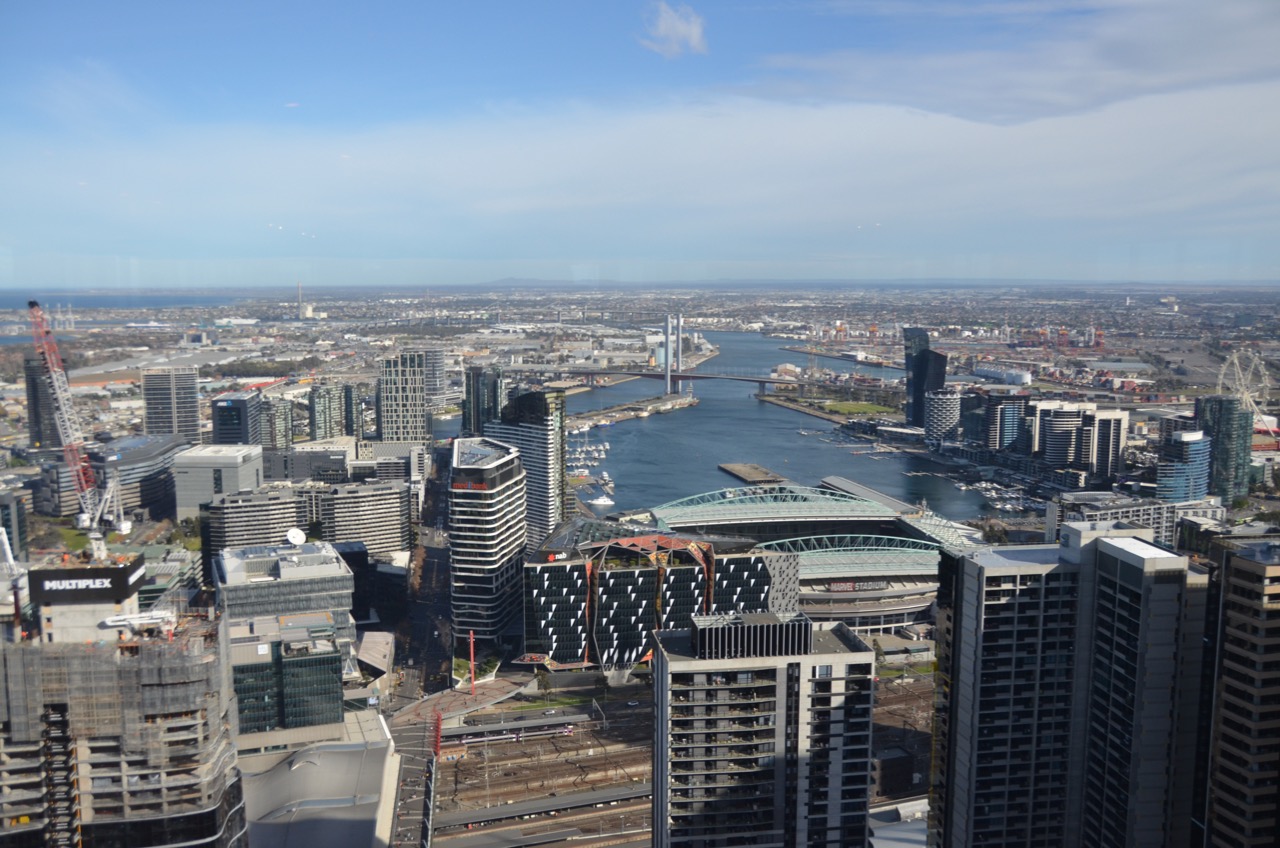 We woke up and had breakfast in the hotel restaurant. The full buffet breakfast was valued at $40 AUD courtesy of Marriott Bonvoy Platinum. The breakfast included an egg station, a gluten free area and a small but adequate selection of fruits, vegetables and salads. The customers were mostly a work crowd similar to at home stocking up on food before their work day.

We Visited the Melbourne Cat Cafe:

We then headed off to the Melbourne Cat Café, which was an idea conceived by MrsWT73. It was my first visit to a Cat Café so I wasn’t really sure on what to expect. It’s pretty much a slower environment. We had made an online booking the day before. Surprisingly, most of the slots of 60 minutes were completely sold out the day before, so we opted for a 10 AM spot.

Once we completed the cat registration, we headed into the two cat zones. The cats were interesting but not all to interactive. Either way, MrsWT73 got her fill of cat attention.

After the Melbourne Cat Café, MrsWT73 and I parted ways while she went shopping in the uptown area of Melbourne’s CBD. I headed over to meet one of my old friends from my Whistler ski instructor days in the early nineteen nineties. We hadn’t seen each other in 27 years and had a good time catching up about where life has taken us. He’s now working as counsel for a large Melbourne law firm. He took me up to his offices where I was able to get in a few great photographs of the Melbourne skyline.

He then was able to spare enough hours in his days where he then went on a walking tour around town including some restaurant recommendations for our week’s stay. After about 90 minutes, I bid my colleague goodbye with hopes that it wouldn’t be another 20 years before we met up.

A drink at a container bar:

I then met up with MrsWT73 and we wandered over to Section 8; a container bar that is situated off of one of Chinatown’s many alleys. We stopped by for a mid afternoon drink amid many of the hipsters.

After dropping the shopping bags off at the hotel, we wandered down through the laneways to the popular Rossiter Lane. Another grafitti’ed spot that was full of photographers.

Looking at Art in the National Gallery of Victoria:

With the rain starting to come down, we headed over to the nearby National Gallery of Victoria for a little indoor modern art. Entry was free and it had enough modern art to keep MrsWT73 entertained.

After the rain had led up, we wandered through the graffiti’ed AC/DC lane. Most of the art herewas related to music, as would be expected from the AC/DC name.

Along with the discovery of art in the lanes, there were many hidden bars and drinking establishments along the way. It seems you could spend a lifetime exploring them all.

I made a booking for Rockpool for dinner. Rockpool is one of the flagship restaurants in Neil Perry’s Pacific restaurant empire; Neil Perry has cooked for Qantas Airways First Class for over twenty years. We walked over to the restaurant which was about 20 minutes walk from the hotel in the Crown casino complex with a bunch of other celebrity restaurants such as Nobu.

The décor was gentlemanly dark with wood paneling and dark upholstered chairs and an open kitchen concept. The wait staff looked like they belonged in an Abercrombie and Fitch catalogue; trimmed jackets and elegant wear.

Dinner tonight was a Cape Grim aged 36 months old grass fed filet 250g and a side of Bearnaise, with a Raddicio, cos and endive salad with palm sugar vinaigrette and a Potato and cabbage gratin.

The food was absolutely spectacular with a steak that was perfectly cooked at medium rare. It was easily among the top 5 steak meals of my life.

Dinner was paired with a Mac Forbes Gruyere Shiraz 2014 ; delicate and easy drinking. Mac Forbes is a local Victoria vineyard near Yarra Junction just out of town.

We passed on desert. There were many wonderful cheeses on offer, although we were totally stuffed having placed a large dent in the offerings. We’d easily return again for a wonderful meal here. I really enjoyed the Rockpool experience and will keep that memory for quite some time.

Memorial office chairs represented those on each floor of the Alfred P Murrah Federal Building in Oklahoma City where the United States first incident of domestic terrorism occurred.
I recently visited the Oklahoma City National Memorial to those that perished in the Alfred P Murrah Federal Buildling terrorist bombing in 1995; the first major domestic terrorism incident in the United States. The memorial was well done and respectful of those that ultimately perished in this terrible tragedy.
Modern Fair Fun at the Oklahoma State Fair, Oklahoma City, Oklahoma, USA
On a Recent Weekend In Oklahoma, it was time to take in the Oklahoma State Fair. It was my first experience visiting a State Fair in the Heartland and we got in all the ferris wheel entertainment we could imagine.
The Sunset at the End of Another Great Las Vegas Trip
Catching a Free Concert Triple Header of John Waite, Men at Work and Rick Springfield at the Fremont Street Experience, Las Vegas, USA
My Idea of a Great Evening: An In - N - Out Burger, a Luxury BMW and a Beautiful Woman.
Where It All Comes Together...
Advertisements