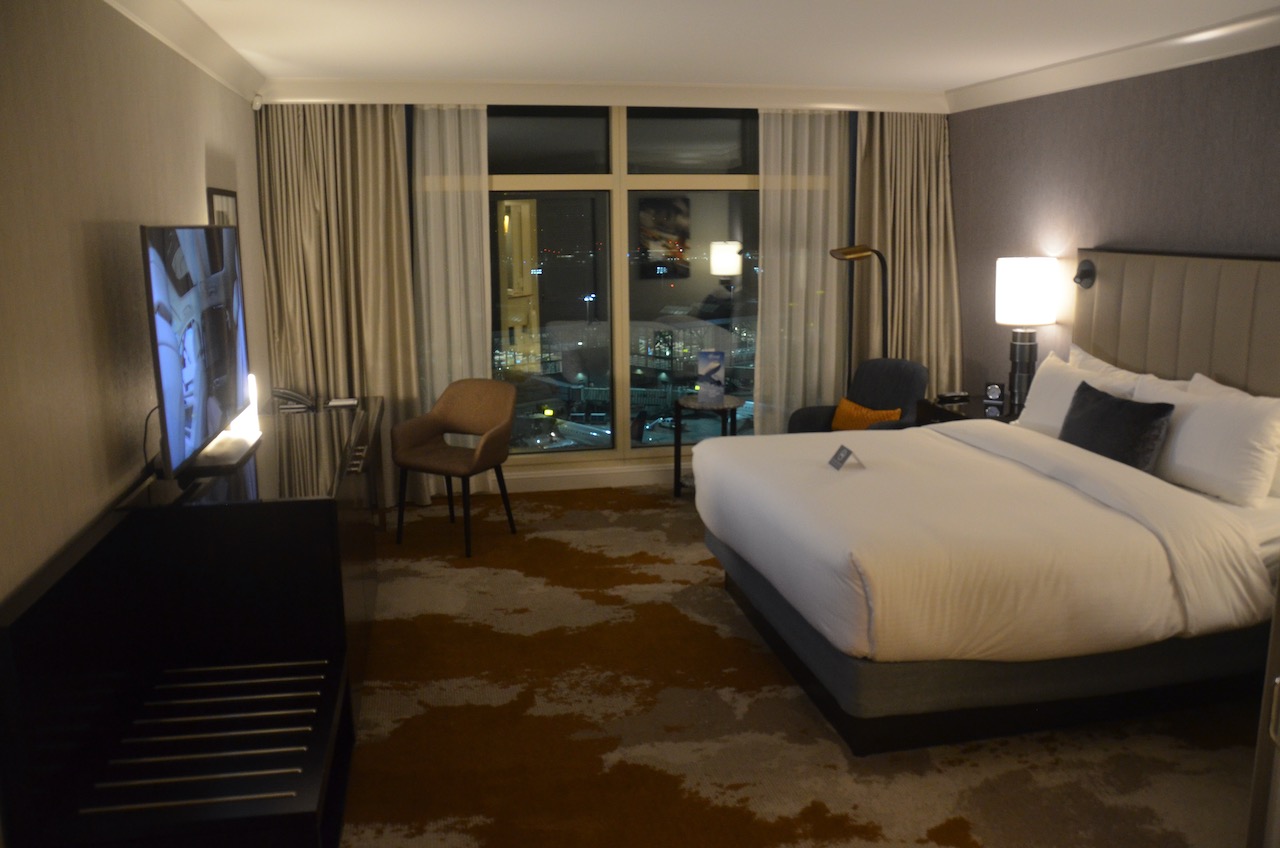 With a departure to the United States departing at seven in the morning, we were keen to make life easy for our travel day by staying at the Fairmont Vancouver Airport prior to our flight. It had been several years since we had last stayed at this property, so we were up for trying it again. The hotel has experienced a full renovation since the last time we visited. How would the hotel perform since the last time we had visited?

It has been a while since I last visited the Fairmont Vancouver International Airport. Since it’s been almost 7 years since I’d last stayed, I figure that it’s worth a review again to see how the hotel as fared over the years.

We had a 7 AM departure on United Airlines Business Class Vancouver – San Francisco. MrsWT73 described this as “an early departure” and was insistent that we stay at the airport in order to get a proper but relaxing jump on our holiday.

I booked the Fairmont through their website direct. I was able to locate a rate of approximately $199 CAD, which was remarkably soft for this property. I typically notice rates of $275 – $300 for this property and it often sells out on weeknights.

Getting to the Fairmont Vancouver Airport:

The Fairmont Vancouver Airport is the only in airport hotel at Vancouver International Airport. It’s located above the US Pre-Clearance Area.

As a Vancouver resident, I self drove my own car to the hotel. The hotel is also accessed through the Skytrain transit system or any other transportation methods too and from the Vancouver International Airport.

Checking into the Fairmont:

On arrival to the property, I parked in the valet and arrival zone out front. There was no host at the street when I arrived, and I found my own way up to the lobby, leaving my car curb side.

After checking in, I would later go self park the car at the Vancouver International Airport long term lot which is about 3 km from the airport. It’s conveniently connected back to the airport by free on “Sea Island” Skytrain elevated rail, and next to the McArthur Glen Factory Outlets; a destination on its own for those with time to kill around Vancouver International Airport. This was handled completely separately from the hotel, and our car would remain there for the duration of our holiday.

Getting back to the hotel, the Fairmont Vancouver Airport hotel lobby is located immediately above US departures and accessible via escalators or elevator.

There was no line at check in. At check in, I was immediately offered assistance with the bags from an onsite attendant but declined. The Fairmont Hotel Vancouver Lobby isn’t super aspirational, and is more of a functional space in the centre middle of the hotel.

At check in, I received a friendly upgrade to a deluxe room from the base Fairmont King that I had booked. My reception host had a “in training” badge but was very pleasant to interact with. Our upgrade was to a north facing runway view. Although I was a loyalty member there was no specific welcome or recognition of it, as a base level member.

My general impression was that the hotel was approximately 50% full based on the number of lights as visible from outside on in the rooms. Despite this, we had friendly treatment everywhere we went and the hotel did not feel full in any way.

The Room: A Fairmont Deluxe Room

I navigated with MrsWT73 up to the room. We ended up in Room #1317, which was on the top floor with runway views facing the North Shore mountains.

The hotel has been fully renovated since the last time I had stayed here. As a result, the hallways and exterior spaces have a clean and slick modern look to them.

Upon entering our Deluxe Room, I was impressed with the renovation. The old airplane spotting telescopes are gone, but the room decorated in nice neutral colors. The room is a reasonable size and is perfectly suitable for those travelling as a couple, unlike some older properties that are quite compact when travelling for two.

Immediately on entering the room, guests notice the large King Size Bed. The bed was inviting and well appointed.

Just off the king size bed is the ensuite bathroom. Opposite the regular side of the bed was an occasional chair for relaxing. The chair had a foot stool and an occasional table. Being up against floor to ceiling glass windows, it would have been an excellent place for airplane spotting during the day time.

The room featured a flat large 55 inch flat screen television. While a 55 inch television is almost industry standard for the hotel rooms, it’s almost too large for the space.

Viewing the television from the occasional chair was much more proportionate.

The room itself was also well equipped with all the needed accessories. This included a small fridge, a set of wine glasses, and a set of coffee mugs, along with a tassimo coffee maker.

In terms of sleep quality, I had a sound and quiet sleep. There was no noise and no airplane noise to be heard inside the room itself. In an old school touch, the room also offered an analog alarm clock.

The hotel offered a spacious bathroom that had two access points; one by the front door and one from the bedroom area. The bathroom itself had a separate shower and a stand alone tub that was embedded into the wall.

The shower itself had good strong pressure. The shower was spacious and room for 1 ½ persons or a spacious size in order to get into the shower and turn it on without getting soaked wet.

The hotel room had great runway views of airport operations. The hotel was also close enough to the runway to actually see operations, as opposed to being so far away from the operations that the views weren’t worthwhile. There was also an aviation themed spotting guide in the room. This was a nice touch personalized to all aircraft and carriers that visit Vancouver.

The hotel had local art on the walls including images of Vancouver Stanley Park Sea Wall and aviation themed art of propeller planes; appropriate for an airport hotel.

The hotel has an small gym. During our visit, a visit to the gym required vaccination verification at front desk as a result of a current Provincial Heath Order as a result of the coronavirus pandemic. As a result, I didn’t stop by for a photograph or avail myself of the facilites.

The in hotel restaurant is the Globe at YVR. It’s probably my favourite restaurant at the Vancouver International Airport. During our visit, there was live music playing. The Globe at YVR was offering meal service until 11 PM, with alcohol stopping at 10 PM as a result of the Provincial Health Order due to the pandemic.

Aside from the Globe at YVR, there isn’t much else around the airport complex that would make this property worthy of a multi night stay when visiting Vancouver. You’d be much better off staying in downtown Vancouver at the Fairmont Hotel Vancouver, the Fairmont Waterfront, or the Fairmont Pacific Rim if you were staying multiple nights. There are also a wide variety of Marriott hotels in Vancouver that cater to the business and leisure travel market.

In advance of our flight, the next day we checked out at 4:45 AM. We had a friendly check out and our bill was as expected. Our Folio was in my email account within 5 minutes.

I wandered downstairs and was immediately at United check in within 50 steps in order to check in for our United Airlines Business Class Vancouver – San Francisco flight. It was pouring with rain outside on our departure so we probably made the right choice by staying dry by overnighting at the hotel.

The Fairmont Vancouver Airport has had a tasteful upgrade in terms of a full hotel renovation compared to the last time that I stayed at this property. The renovation has been nicely done and all the dust has been cleared. The hotel still offers a classy place to stay, with considerate and professional levels of service at every opportunity. While this isn’t the hotel to stay in for several nights at a time, it is the best option to stay at if you have an early departure to the United States.

If you have stayed at the Fairmont Vancouver Airport, did you appreciate how easy it was to get to your gate ?