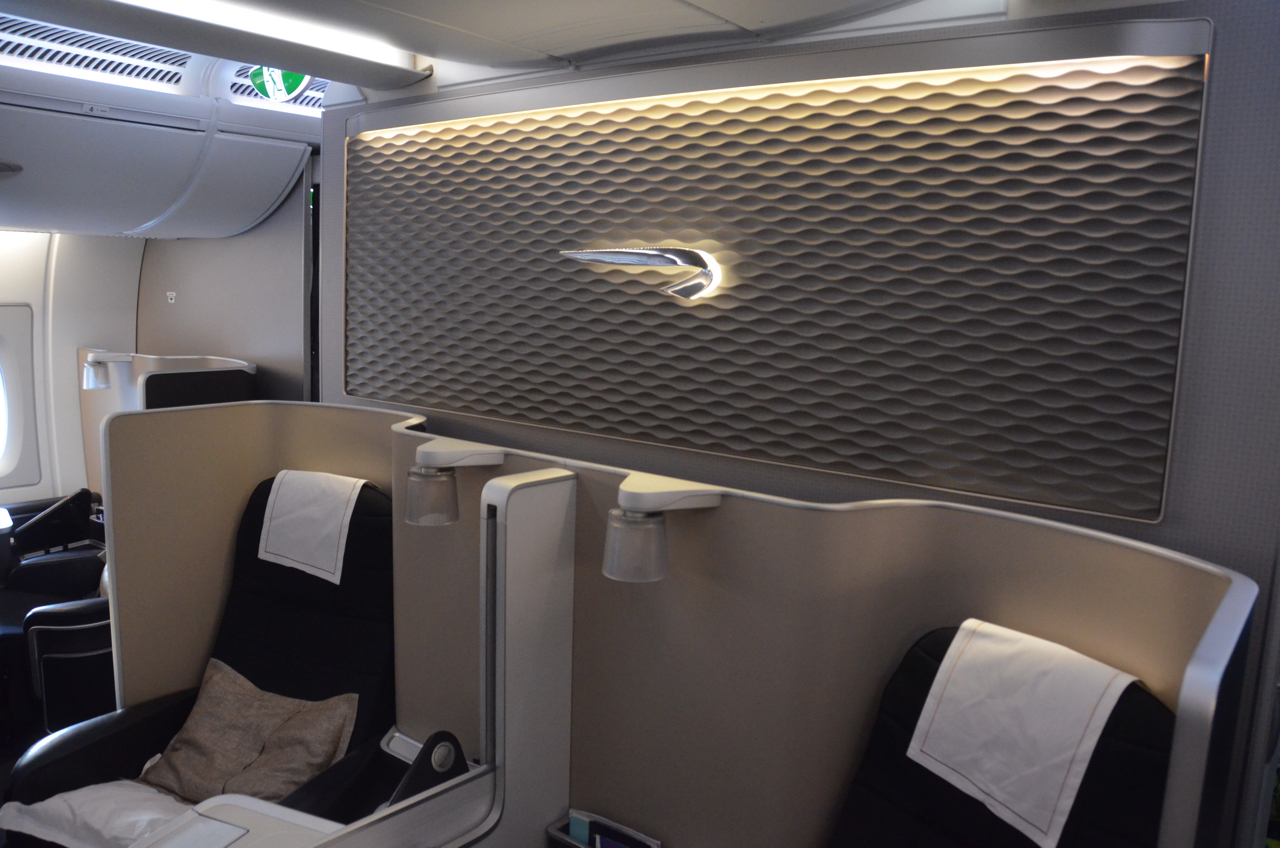 At about T-45 minutes, we departed the Cathay Lounge. We headed for Gate 1, which happened to be the row where all the A380 gates are. We passed by the Emirates Lounge on the way and a large A380 from Emirates parked at Gate 7.

We headed along the travellators through a well staffed document check with an army of three people checking documents on the concourse itself. We were then directed to the left where there was a proper and well marked shorter queue First Class and Priority Boarding Lane.

We approached the gate where the call for First Class and One World Emerald had just been announced. We timed it well and walked straight on board. There were lots of people around but the gate was spacious enough that there were lots of space to navigate through the crowds.

We had a proper dedicated jet bridge for First Class today. MrsWT73 was happy to be travelling up front. Surprisingly, the top matches the bag.

On Board the British Airways First Class cabin:

We were welcomed on board through L1 and we were asked by crew to find our way to our seats ourselves.

“The British Airways First Class service on the Airbus 380 is miles ahead of the dated and old configuration on it’s Boeing 747. It features a spacious suite, privacy and all the elbow room that is missing on the Boeing 747 product.

The seat lights and controls were adjusted using a fairly convenient touch pad, with rotary dials for the angles.

The entertainment system was controlled by a wired remote.

We settled in and push back was on time.

A Pre-Departure beverage was offered. I went with the Laurient Perrier Grand Siecle. Top ups were offered with the bottle brought round to the seat but I didn’t partake in any as I was still feeling not so healthy (terrible).

The flight bag was brought around. The Amenity Kits are stocked by Liberty’s of London with Refinery products. There were actually quite a view items in there, some of it actually useful unlike the bag which is too small to practically store anything.

A sleep suits was also brought on the tray. I took a large and as a 6ft 2inch tall person it was a little short in the sleeves. The pyjamas were unbranded, save the BA First logo on the crest.

The senior purser came around to introduce his staff and to welcome us on board. FA Kevin would be serving us throughout today’s flight and did an excellent job with great polish to his presentation. The menus were also dropped off. The menus read as follows…

The main menu had an interesting selection of foods; most that looked interesting and appealing. The afternoon tea offering for the second service had sandwiches that sounded much more exciting than they actually were…

The drink list was reasonable. I think this is one area that British Airways actually does reasonably well, save the occasional low rent touch.

We had an announcement by the captain that the flight would be approximately 9 hrs to Vancouver with no major bumps or turbulence to be expected. We had push back next to an Emirates Airbus 380 from Gate A7..

We had an on time take off out of Heathrow. As always, it was the smoothest take off in the world as was expected on the A380. Shortly after take off, a dinner order was taken. While the crew were preparing dinner, a pre supper appetizer of mixed nuts and Laurent Perrier Grand Siècle was offered. The temperature of the Grand Siècle was proper and it had actually been properly chilled. MrsWT73 joined me in the jump seat for some pre supper chats. There is a small jump seat that is available for such a purpose.

At about 90 minutes into the flight, dinner service started. The first plating was the antipasti plate featuring Cumbirna air dried ham, Cumberland salami, berkswell cheese, olives and sundried tomato. It was nice but a bit flat tasting.

The second course was the seared hand dived scalloped with sweet corn purée, smoked paprika and char filled ciabatta, paired with Montrangy 1er Cru 2015, Bouchard Père et Fils, Burgundy, France. The wine was a bit strong for me but the scallop pairing with the intermingled flavours was really nice.

The main show was the seared fillet of Heredforshire beef and salt beef croquette, with dauphinoise potato, cep aioli and caper beurre noisette, paired with Ch teau Prieuré 2011, Cru Classé, Marguaux Bordeaux. Unfortunately, as with usual beef offerings on aircraft, it was totally overcooked but a tasty slice of beef.

With the first dessert course, I had the Vanilla bean ice cream, paired with Muscat de Beaumes de Venise 2016, Vin Doux Naturel, Domaine de la Pigeade, France. I was still feeling terrible as evidenced by the fact that there was a lot of wine left behind.

I closed with the cheese plate. The plate offered Cave Aged Wookey Hole Cheddar & Tomme de Savoie. The presentation was pretty elementary school, with crackers and a few grapes piled onto it.

The dinner service was done at 9 PM or about 3.5 hrs after take off. I might add that I was a slow eater. Most of the cabin turned down for sleep. As such, I asked to have my bed made up and it was done.

I attempted some sleep. I didn’t drink too much and as a result, didn’t fall to sleep right away. Took a few hours of gentle tossing and turning.

I ended up waking up at about 1:15 AM (London Time) to cabin noise and light; about 1.5 hours to the end of flight.

I ended up having the second service of Afternoon Tea. This consisted of a miserably light Camomile Tea, an individual selection of sandwiches featuring, chicken breast with light curried mayonnaise, roasted red peppers, and baby spinach, free-range egg mayonnaise with fresh salad cress and smoked Scottish salmon with creamy soft cheese, lemon dressing and cracked black pepper. This was served with a patisserie of Raspberry and orange Battenberg, Victoria Sandwich and a Chocolate salted caramel cup with Buttermilk scones served warm with clotted cream and strawberry preserve.

Wow, it sounded deluxe but the sandwiches were terribly small. I devoured all these small portions. The food quality was tasty. I could have used a slightly larger tea pot but this was more of a style over quality issue. Although it captured the essence of afternoon tea, it was among the first times I got off of an International First Class and was actually hungry by the time I arrived to my destination.

The flight entertainment system, which I hardly used, had a few movies but nothing too noteworthy to write home about.

I took a stretch before landing while the bed was packed away and checked out the British Airways staircase at the front of the cabin.

We had a smooth as expected landing at YVR. We pulled up next to an Air Transat Airbus A330.

Overall, it was a very pleasant flight with British Airways. The BA First Class configuration on the Airbus A380 was reasonably spacious; more so that the Boeing 747 configuration. The service was professional and pleasant. The food was reasonable, although the serving size for the second serving was pretty pathetic. The quality of food and beverage went a long way in making the flight more memorable. It was also a great relief to be arriving directly into Vancouver and not having to take another flight to get to my final destination.

“The British Airways First Class flight their flagship Airbus 380 is the best that it gets on British Airways. While the food and beverage quality has improved, the second meal service was particularly lacking for an international long haul first class product”