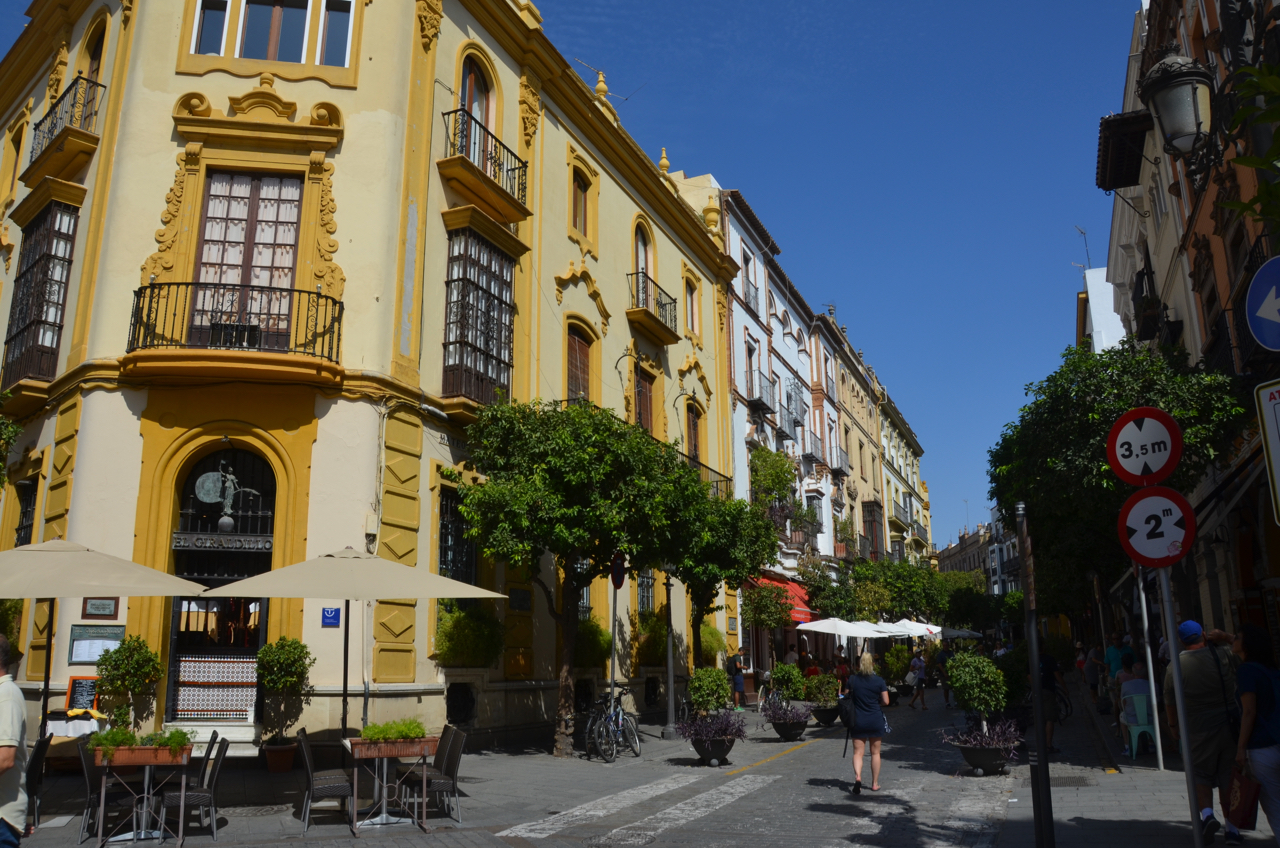 We had a bit of a sleep in and enjoyed another SPG Platinum Breakfast in the great room. The Alphonso XIII breakfast room was interestingly designed and breakfast had all the goodies one could ask for. This included free flow Cava, which made MrsWT73 very happy. The breakfast hall of the Hotel Alphonso XIII is more like a ball room, with an intricate ceiling.

Despite all the guidebooks’ advice of not visiting both the Seville Cathedral and the Alcázar attractions on the same day, our visit times curing our stay didn’t allow for this flexibility and we ended up having to complete both attractions in one day. However, I do agree with their advice, if you have the opportunity and flexibility in your schedule, it’s best to split these up.

Our first stop today was at the Seville Catherdal. The opening hours were more limiting here being only open for the day between 1100 AM and 5:00 PM so we opted to tackle this attraction first. After about 15 minutes in line to purchase tickets, we were admitted to the massive hall. The Seville Cathedral is among the largest Gothic Cathedrals in the world. It is reported to be 23,500 square meters.

We took in the large spaces. We stopped by the reported tomb of Christopher Columbus. There is a conspiracy theory that he may actually be buried in the Dominican Republic, despite this opulent stay.

There were also several works of art on display as we made our way throughout the complex.

We climbed Giralda Tower within the Seville Cathedral. The Giralda Tower was initially a miniaret for the mosque that used to occupy this site from 1200 AD. It was a ramp initially designed so that the guards could climb up on horseback the 31 floors to the top. There were some interesting views from the top and the various portholes along the way.

We passed through the Orange Grove of 60 trees on our way towards the exit. There was some traces of the cathedral’s previous history as a mosque based on the arch like architecture on the way out.

We were feeling a little snackish so we headed up just next to the Cathedral towards Plaza Salvador for lunch. We ended up in a random tapas and wine bar called Robles Placentines. We had a brief tapas’ snack with some tasty Verdejo to wash it down with.

After our fill up, our second visit this afternoon was to the Alcázar. The Alcázar was a historic castle that was the residence of many generations of kings.

The property is large and sprawling. Although it is decorated without furniture, you can get an idea of the configuration through the layout of its rooms and the story boards.

There were many examples of historic architecture and tiling in this part of the world. The detail was one of the most interesting parts of the Alcázar.

The grounds also had beautiful gardens fit for a king.

After all that, we wandered back to the hotel for a rest. We eventually headed out to dinner at La Moderna, a small and somewhat touristy place just off la Giralta from the Seville Cathedral. They had tasty but somewhat uninspiring tapas’ .

Since it was Saturday night, we then headed over to La Bodega de Santa Cruz, a popular and busting neighbourhood bar that spilled out into the street. We jostled at the counter for wine, then took up a table outside. We struck up several conversations with a younger British couple in property law that were visiting for an extended weekend from Birmingham, United Kingdom. We also enjoyed another chat with a couple from Toulouse, France who were also here away from their kids for the weekend. We had a great time and eventually closed down the place when they hit last call at 12:30 AM; surprisingly early for a Saturday night.

All in all, we really enjoyed the weekend in Seville. I was happy to have finally gotten the opportunity to visit, after our past trip to Madrid and Barcelona. There were lots of attractions to see, a vibrant casual restaurant culture, along with warm temperatures and heat. I would have enjoyed to explore more of the surrounding area, but given our schedule, it would have to be saved for another trip.